Latest To Challenge The Term 'Coupe' Is A Pretty One View All Specs
It's hard to say what a coupe is anymore. Is it merely a car with two doors? Does it have to have an arching roofline? Do frameless windows count for anything? Can a five-door hatchback or even an SUV be a coupe? At some point in the last few years, nearly everything we thought made a coupe a coupe has been challenged by something that calls itself a coupe, but to most people isn't. Our friends at BMW have led most of this line of questioning.

The new 2015 BMW 4 Series Gran Coupe is one of the latest Bimmers to challenge the moniker (which also challenges the idea of "Gran," for that matter), and unlike some of its other "coupe" variations – we're looking at you, X6 – this one is a pretty one. The 4 Series Gran Coupe is essentially a four-door version of the 4 Series, which is itself a two-door version of the 3 Series. Huh? Wouldn't that simply make it another 3 Series? Of course, but this one is prettier, as it uses the 4's sexier body styling, with its lower nose, wider-looking stance and edgier lighting graphics. It is also technically a five-door hatchback, not a sedan per se, and it utilizes frameless side door glass, which apparently does count for something in BMW coupe-land. Significantly, the 4 Gran Coupe's wheelbase is identical to the two-door; if it was longer – as is the case with the 3 Series and 5 Series hatchbacks – that might make it a " Gran Turismo." Confused yet?

We recently got our first chance to drive the 4 Series Gran Coupe at a press launch in Spain, and while the only version we were given was a rear-drive 428i Gran Coupe with the M Sport contents, the harrowing roads around Bilbao gave us a good idea of what this car is all about from a driving dynamics standpoint. Here's some of what we found: 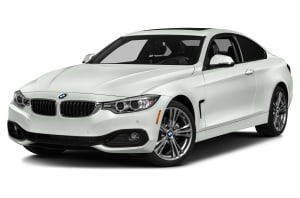