Chris Bruce
We fell in love with the Mini Superleggera Vision Concept from the moment we laid eyes on it. The little convertible blends retro and modern together better than any Mini in years. There is even more good news about the roadster as well because the company is considering actually building it. We even have some renders of what the production version could look like. 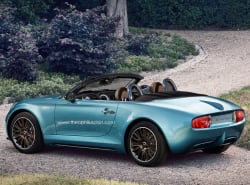 Mini boss Peter Schwarzenbauer tells Automotive News at the 2014 Concorso d'Eleganza Villa d'Este, that the Superleggera might have a life beyond its debut. "We wanted to test how Mini enthusiasts worldwide were reacting to such a different type of Mini. So far, it has received overwhelming appreciation," he said to AN. But here's the bad news. All of the unique elements of the droptop wouldn't be cheap to build. Pricing would likely be around 35,000 euros if BMW gives it the green light, according to Schwarzenbauer. It's too early to know whether the road car would use the electric motor from the concept or something more conventional.

The Superleggera Vision concept comes from the creative minds at Touring Superleggera who are also responsible for the gorgeous, modernized Disco Volante. The wonderful thing about the design is that it's still obviously a Mini but somehow adds a sprinkle of Aston Martin.

The rendering above comes from Theophilus Chin, allowing us to visualize what the roadster might like if production is granted. It tones down the shape at the front and adds an actual grille. At the back (right), Chin makes the rear end a little more curvaceous but also shrinks the car's fin. In all, even if pricey, we think it's a car that could find some takers if built.