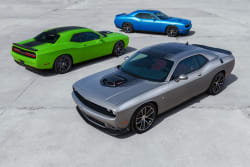 The onslaught of news from Fiat Chrysler's layout of five-year plans continued with Dodge CEO Tim Kuniskis this morning, including the unexpected announcement that SRT was coming back into the fold.

After just a few years existing as an independent entity within the Fiat Chrysler universe, an unceremonious press release hit in conjunction with today's lineup of announcements, saying "the SRT family of vehicles will be consolidated under the Dodge brand." Group CEO Sergio Marchionne thanked SRT headman Ralph Gilles for his dedication to the high-performance wing, calling out is efforts in expanding the vehicle lineup and including more customized models. He did not reference disappointing SRT Viper sales today, but we sense there's a bit of subtext.

With the SRT reunion at Dodge, it's appropriate that some of the most exciting product announcements for the next five years have to do with upcoming performance products. First out of the gate will be a refresh for that flagging Viper in 2015, which comes as little surprise.

Dodge Dart will see a refresh in 2016, and will finally get the SRT treatment at the end of that year, as well. Details are still forthcoming, but we do know that the Dart SRT will have a turbocharged engine (shocking, we know) and that it will use an all-wheel-drive powertrain.

2016 will also see an all-new Dodge Journey, which is fairly expected. That Journey will be turned into something rip-roaring by SRT in 2017, which is something that we didn't see coming. 2017 is also the year that the Dodge Durango will get its mid-cycle refresh.

It's 2018 that is, by far, the biggest line item on the Dodge five-year plan, however. The brand will bring forth a B-segment sedan and hatchback that is yet unnanmed, while also debuting an all new Challenger and Charger, both in July. At the end of the year (December), Charger and Challenger will get SRT iterations. It's likely that both will get the supercharged 6.2-liter Hemi V8, codenamed " Hellcat," at their hearts.

Wrapping up Dodge's big day, we're told that Avenger will be killed off this year, and, rather shockingly, that Grand Caravan, the original minivan, will follow it to the grave in 2016. With a target sales figure of 600k units for 2018 (roughly what the brand is doing now), we expect the minivan death is simply part of the larger plant to round out the performance cred of Dodge, overall.
Show full PR text
Chrysler Group Announces Leadership Changes
May 6, 2014 , Auburn Hills, Mich. - In conjunction with the outlined plans for Fiat Chrysler Automobiles (FCA), Chrysler Group LLC today announced that the SRT family of vehicles will be consolidated under the Dodge brand. Tim Kuniskis will lead this effort as he continues his role as President and Chief Executive Officer (CEO) of the Dodge Brand and head of the Company's Fleet Operations. Ralph Gilles continues as the Senior Vice President of Product Design and President and CEO of Motorsports. The move is effective immediately.

"I want to thank Ralph for his dedication to the SRT brand," said Sergio Marchionne, Chairman and CEO, Chrysler Group LLC. "Under Ralph's leadership, the SRT brand expanded its vehicle lineup to include more highly customized models and received numerous automotive awards and distinctions."