Sub-brands are emerging as the latest trend, particularly among German automakers. BMW has rolled out its new i family of electric vehicles. Audi looks poised to spin the TT off into its own line with added bodystyles. Mercedes-Benz is expected to bring the Maybach name, once its own brand, back as a model designation at the top of the S-Class range. And now Volkswagen is rumored to be planning more retro models to follow in the footsteps of the Beetle. 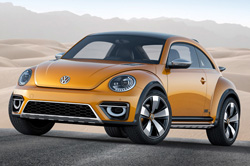 Word on the street in Germany is that, after three generations of Beetle, VW is weighing the possibility of expanding its retro offerings. According to Autobild, Among those in contention to join the Beetle hatchback and convertible are a sportier Beetle coupe with an even sportier roofline than the latest Bug, a soft-roader in the mold of the Beetle Dune concept (pictured at right) and a Micro-bus minivan revival like the Bulli concept (pictured above).

If those prove as successful as the Beetle itself, who knows what other members VW could add to the family? Like the expected next-generation Beetle, the entire family would almost certainly be based on the flexible new MQB modular architecture that already underpins the VW Golf, Audi A3, Seat Leon and Skoda Octavia.

Of course, if some – or all – of this sounds familiar, that's because we've heard rumors of expanded Beetle ranges and production Bulli Microbus throwbacks many times before. Even though Autobild is normally reliable, if you're like us, you'll take this latest report with a whole box of salt.