Drawings Of Two Options Given To Investigators

Documents do not shed light on what motivated the decision to eschew use of the first switch.

General Motors made a fateful choice in the fall of 2001.

The company considered two options for ignition switches to be installed on the 2003 Saturn Ion. One drawing submitted that September contained an ignition switch that included a longer detent spring and plunger with greater torque.

In October, one month later, the company considered another engineering drawing that showed a shorter detent spring and plunger, which made it easier for the switch to move between the "run" and "accessory" positions.

Documents do not shed light on what motivated the decision to eschew use of the first switch, but GM's decision to go with the shorter switch has proven to have far-reaching consequences. The shorter switches have been linked to at least 32 car accidents resulting in at least 13 deaths.

Drawings of the two different switches were among the 200,000 pages of documents GM submitted to federal investigators who want to know why the company waited until this February to recall more than 2.5 million cars afflicted with the defective switches when it had knowledge of its flaws for more than a decade. The springs in the shorter switches were 9.6 millimeters; the springs in the longer ones were 12.3 millimeters, according to the documents. The difference between life and death was 2.7 millimeters.

On Wednesday, the Center for Auto Safety, which first noted the differences between the drawings, sent a letter to General Motors CEO Mary Barra, asking if she had been briefed about the differences in the parts – and the documents that illustrate them – in advance of Congressional hearings held earlier this month. Clarence Ditlow, the executive director of CAS, and Joan Claybrook, a former head of the National Highway Traffic Safety Administration, called on Barra to release all documents that shed light on the decision to select the switch utilizing the shorter detent spring and plunger. 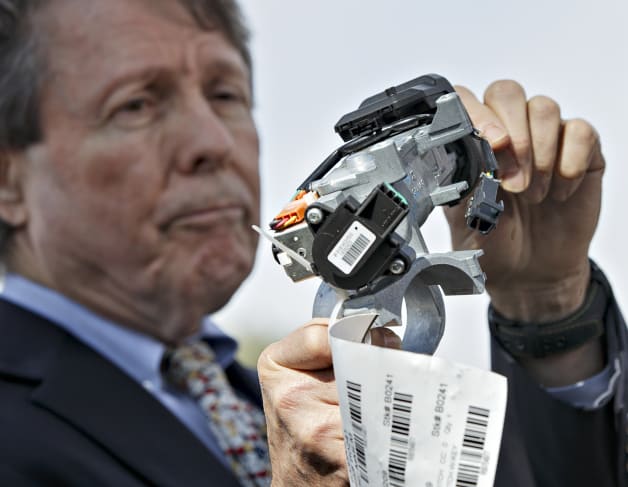 In response, Greg A. Martin, spokesperson for General Motors, told Autoblog Wednesday that all of the questions would be addressed in an internal investigation being conducted by former US Attorney Anton Valukas. Martin said Valukas' investigation is expected to be completed within the next 45 to 60 days.

The defective ignition switches inadvertently could move from the "run" to "accessory" positions, and consequently turn off the engine and electrical systems, including the airbags and power steering. After their inclusion on the '03 Saturn Ion, GM also used them on certain models of the Chevrolet Cobalt, Saturn Sky, Pontiac G5 and Pontiac Solstice.

Consumers began complaining about the flaw and airing safety concerns almost immediately. Documents show that General Motors subsequently changed the part on April 21, 2006. The company didn't have to look far for a solution – it started using the switches with longer detent springs and plungers that it originally rejected five years earlier.


It was a "silent remedy," the Center for Auto Safety charges.

It was a "silent remedy," the Center for Auto Safety charges, one that enabled General Motors to hide the problem from federal safety regulators who might have compelled a recall of vehicles affected by the problem. Federal laws mandate that automakers report safety-related defects to NHTSA within five days of learning about them.

When GM made the switch to the longer switches, documents show that the company kept the same part number, violating a basic engineering tenet, a failure that Barra has acknowledged was inappropriate and substandard.

As scrutiny of the ignition switch mounted in the wake of a lawsuit settled last September, an engineer from Delphi, the supplier of the flawed switch, emailed his GM counterparts on October 29, 2013 trying to ascertain when the company had switched to the switch with the longer springs and plunger.

He referenced the original part numbers from the two options that existed in 2001, noting that they were different, and that matched the description of the changes made in 2006.

"Given these startling revelations that a safer switch existed in 2001 before the Saturn and Cobalt were put into production," Ditlow and Claybrook wrote, "we call on you to make the full 'unvarnished' internal investigation of Anton Valukas public as he must surely probe these areas."
X