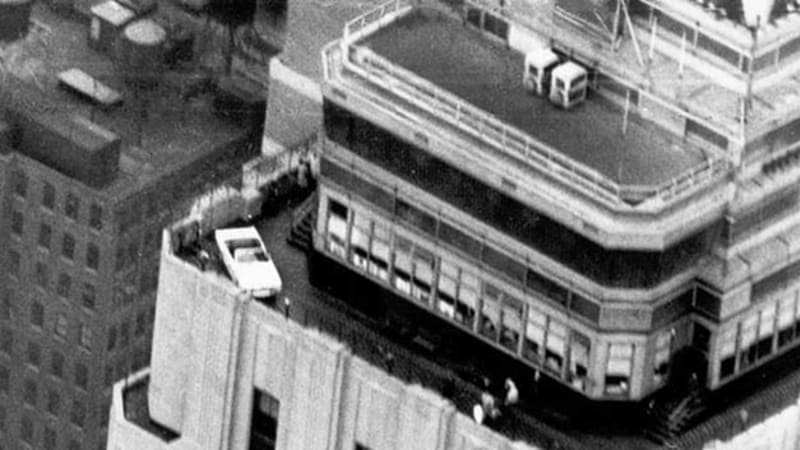 It would have been all too easy to miss the auto show debut of the 2015 Ford Mustang convertible. It was, after all, unveiled alongside its fixed-roof counterpart at the Detroit Auto Show this past January, lumping coupe and cabrio into one debut. But Ford is evidently still intent on making its new droptop stand out. The top of the Empire State Building ought to do the trick.

Automotive history buffs may recall that, 50 years ago, Ford unveiled its first Mustang convertible atop what was then the tallest building in the world, that Art Deco icon of the New York skyline. Half a century later, Ford is recreating the feat and bringing the new topless Mustang to the same observation deck on the building's 86th floor.

Getting it up there, of course, will be no easy task. While they'd usually airlift the vehicle onto the roof or lift it by crane, the spire protruding from atop the building makes approaching the narrow observation deck too dangerous, and no mobile crane can telescope the thousand-plus feet it would take to get the pony car up there.

That leaves the elevators, which were too small to accommodate the original Mustang, and this latest one is seven inches longer and four inches wider. So, just like it did in 1964 during the World's Fair, Ford has dispatched a team to take detailed measurements of the elevators and their doors. After they return with their findings, the Blue Oval will dissect the display car and mount the pieces onto custom racks to be reassembled on April 16 in just six hours. Following those efforts, the public will be able to see the Mustang on display for 54 hours on the observation deck, where it just might garner more attention than the panoramic vista behind it... or than it did on the auto show floor in Detroit.
Show full PR text
Icons Converge: Ford Mustang Celebrates 50 Years at the Empire State Building

- On April 16-17, Ford is celebrating 50 years of continuous pony car production by bringing the all-new Mustang convertible to the Empire State Building's 86th floor observatory, allowing visitors to join in the festivities

- Ford is re-creating the same feat it achieved nearly 50 years ago – unveiling a Mustang on the world's most famous attraction, once again making history

- A technical team is hard at work disassembling a Mustang into sections so that it will fit into the elevators of the 1,454-foot-tall international landmark


NEW YORK, March 25, 2014 – Two of the world's most recognizable icons are coming together April 16-17, as the all-new 2015 Ford Mustang convertible will be on display on the observation deck of the Empire State Building in New York. The display – replicating the same feat from nearly 50 years ago – coincides with the global celebration of 50 years since Mustang debuted at the 1964 World's Fair in New York.

"New York is one of the greatest cities in the world, and it's the place where the Ford Mustang story began 50 years ago," said Mark Fields, Ford chief operating officer. "We're thrilled to be visiting the architectural landmark that has been the heart of the Manhattan skyline for 83 years with the newest generation of the car that is the soul of Ford Motor Company."

Taking a car 86 stories above the densely populated streets of Midtown Manhattan is no simple task. No portable crane can reach the 86th floor observatory, and the spire towering above the relatively narrow deck makes helicopter delivery impossible. That leaves the elevators as the only viable option.

When the Empire State Building opened in 1931 as the world's then-tallest building – a title it held for nearly 40 years – no one would have envisioned trying to transport a car up in the original elevators. But in 1965, a prototype Mustang convertible was sliced into three main sections plus windshield so that the sections would fit into those elevators.

"Like all good craftsmen, our team is measuring twice and cutting once to make sure we can get this Mustang up in the elevators," said Dave Pericak, Mustang chief engineer. "Like the team that did this in 1965, the current crew visited the Empire State Building before starting and took careful measurements of its new elevators and doors before cutting up the car."

The 2015 Mustang is nearly seven inches longer and four inches wider than its ancestor, making the task of transporting it up even more challenging. Working from computer engineering data, team members preparing the display car have found just the right places to make the cuts so everything can be loaded onto custom-made racks that can be rolled into the elevators.

Once everything is uncrated and transported up 86 floors, the technicians will have less than six hours to reassemble the sections into a complete car that will be on display above Manhattan.

"It is a privilege to celebrate the new Ford Mustang, to bring together our two iconic brands, and to make new history with Ford," said Empire State Realty Trust Chairman, President and CEO Anthony E. Malkin. "The Empire State Building and Ford Mustang are both historic innovators – today, as in the past."

Visitors to the Empire State Building observation deck can see the new Mustang convertible for 54 hours from 8 a.m. to 2 a.m., April 16-17.

2015 Ford Mustang
The all-new Mustang is the most advanced version yet of the iconic pony car, offering more advanced driver-assist technology than any other car in its class. The sleek new design of Mustang fastback and convertible is backed up by world-class performance from a range of available engines, including a new turbocharged EcoBoost® 2.3-liter and an upgraded 5.0-liter V8 with more than 420 horsepower. The new Mustang goes on sale later this year. In addition to state-of-the-art connectivity systems, Mustang features available track apps, launch control and more.

Ford Mustang was revealed to the world with a television advertising campaign on the evening of April 16, 1964, before being shown to the public at the New York World's Fair on April 17. The car officially went on sale that day, and Ford dealers accumulated a record 22,000 sales and orders that first day on the way to more than 418,000 sales in the first year and 1 million sales in less than two years. Over the past five decades, more than 9 million Mustangs have been sold.

$983 - $2,448 Nat'l avg. savings off MSRP
See Local Pricing
I'm not in the market for a vehicle at this time. Please move this suggestion to the side for 30 days.
Huge Savings