Brandon Turkus
A 2015 GMC Yukon burst into flames while on a test drive in Anaheim, CA on Sunday after smoke filled the cabin. Residents of the neighborhood where the driver abandoned the redesigned Yukon reported hearing a series of small explosions (likely the tires, based on the video), according to a report from KTLA and The Los Angeles Times.

No one was injured in the incident, which The Times reports occurred after a possible oil or fluid leak. As you can see in the image above, the Yukon was engulfed in flames, although the Anaheim Fire Department was able to put out the blaze in about 15 minutes.

"We're very lucky that no one got hurt, and it was in an area that... was safe," Lt. Tim Schmidt of the Anaheim Police Department told KTLA reporters. "If there was any place that was going to be safe, it would be this area. It's very open. It worked out for us."

"Everyone kept thinking: Is it going to explode one more time? Because it looked like the gas tank was still there, intact," Sergio Luna, one of the witnesses, told KTLA. "So that was the big fear: If it does go off, what's going to happen?"

The news of a new model catching fire comes on the heels of a massive and controversial recall for General Motors, which has faced criticism for failing to recall over one million vehicles due to faulty ignition switches.

GM is aware of the fire and is set to dispatch a field team to analyze the destroyed SUV "very soon," according to GM's Alan Adler. Adler added that it's too soon to know much of anything - the fire, after all, did only happen yesterday - but it's hoped that the field team being dispatched will have answers as soon as possible. We'll be sure to stay with this story and update you as more information becomes available. Scroll down for the full news report from KTLA. 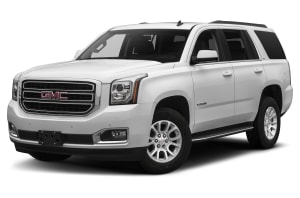