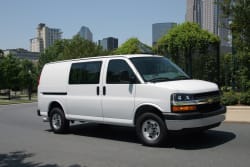 Still embroiled in the ongoing ignition switch recall, General Motors announced today three more discrete recalls, affecting a grand total of 1,546,900 vehicles in the US. The Detroit News reports that some 1.7 million vehicles are affected overall in North America.

The first and largest of the trio of new recalls concerns some 1.18-million Buick Enclave and GMC Acadia crossovers from the 2008-2013 model years, Chevrolet Traverse from 2009-2013 (pictured above) and Saturn Outlook vehicles from 2008-2010. All of the crossover utilities may have an issue with the wiring harness for their seat-mounted side airbags. Apparently, the vehicles are equipped with a Service Air Bag warning light that, if ignored, "will eventually result in the non-deployment of the side impact restraints." Those restraints include the side airbags, a front-center airbag if the vehicle is so equipped and seatbelt pretensioners.

Dealers of affected vehicles will be instructed to remove driver and passenger side airbag wiring harness connectors, and then "splice and solder the wires together."

The second recall affects 303,000 Chevrolet Express (pictured right) and GMC Savana vans from model years 2009-2014, and with gross vehicle weights under 10,000 pounds. Said vehicles do not comply with a head impact requirement for unrestrained occupants, and will need a reworking of the instrument panel material to be sent back on the road. It doesn't sound as though there's a quick fix for this one, as the GM press release states: "Unsold vehicles have been placed on a stop delivery until development of the solution has been completed and parts are available."

Finally, the third recall affects 63,900 Cadillac XTS luxury sedans from model years 2013 and 2014. A brake booster pump may be susceptible to corrosion by way of the relay, potentially causing and electrical short, overheating, melting of plastic components and even engine fires. GM says it is aware of two engine fires in unsold XTS models and two cases of melted parts. Repairs for the issues affecting the XTS have not not mentioned by GM in the release.

The Detroit News is also reporting that along with news of the triple-recall, GM is taking a $300-million credit to help pay for the repair costs, and to deal with the ongoing costs associated with the ignition switch recall. In an attempt to explain just what GM has been doing in the face of these very serious issues, newly minted CEO Mary Barra has addressed the issues in a new video. Scroll down to watch Barra's mea culpa update, and to find the brief GM press release.

The full-size vans with gross vehicle weights of 10,000 pounds or less do not comply with a head impact requirement for unrestrained occupants, requiring a rework of the passenger instrument panel material.

Unsold vehicles have been placed on a stop delivery until development of the solution has been completed and parts are available. Customers will be notified at that time. Repairs will be made at no charge to customers.

In the XTS, a brake booster pump can create positive pressure within the wiring harness attached to the pump relay. This pressure can lead to the dislodging of a plug in the brake booster pump relay, allowing corrosive elements to enter the connector and form a low-resistance short that could lead to overheating, melting of plastic components and a possible engine compartment fire.

GM is aware of two engine compartment fires in unsold vehicles at dealerships and two cases of melted components.

With respect to the Enclave, Traverse, Acadia and Outlook, the vehicles are equipped with a Service Air Bag warning light in the driver information center. Ignoring the Service Air Bag warning light will eventually result in the non-deployment of the side impact restraints, which include driver and passenger seat-mounted side air bags, front center air bag (if equipped), and the seat belt pretensioners.

To repair the condition, dealers will remove the driver and passenger side air bag wiring harness connectors and splice and solder the wires together.

"Today's announcement underscores the focus we're putting on the safety and peace of mind of our customers. We are conducting an intense review of our internal processes and will have more developments to announce as we move forward," Barra said.

GM expects to take a charge of approximately $300 million in the first quarter primarily for the cost of the repairs for the three safety actions and the previously announced ignition switch recall.
X