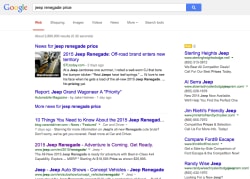 UPDATE: This story has been changed to incorporate new information.

While there's no shortage of excitement surrounding the new Jeep Renegade, one of the limiting factors to the little trucklet will be its price. With the Kia Soul starting at $14,900 and the Nissan Juke kicking off at $18,990, the Renegade can't afford to stray away from that price bracket.

Earlier today, it looked like leaked pricing info would keep it solidly in that price range. But the information -- which got us excited because we're intrigued to see where the Renegade will land -- was a glitch. Google's data bots pulled in the price for the Jeep Compass, showing it starting at $18,595.

When we first reported the story, we surmised that this pricing information could be a bit of a fluke, since that starting figure is identical to the current Jeep Compass. It seemed possible that someone behind the Jeep website or at Google may have plugged the Compass' pricing in by mistake. Of course, it would also make sense for the Renegade to pick up where the Compass left off; time will tell. We've now got confirmation that the Renegade information posted through Google was an error.

Todd Goyer, head of brand communications for Jeep, said the official price is still under wraps. "I can't comment on pricing. It will be announced closer to launch," Goyer told Autoblog.

While that's a disappointment, what Goyer added isn't. We can confirm that the Renegade should arrive in European showrooms during the fourth quarter of this year, while the US dealers can expect to see the new Jeep during the first quarter of 2015.

It is still extremely early for pricing on the new Renegade, but if Jeep plans to price the Renegade around the same price as the Compass, we think that's a rather reasonable goal. If we get any official information on pricing between now and the Jeep's European arrival in Q4, we'll be sure to let you know.