Toyota has announced a small recall of its redesigned, 2014 Highlander over issues with one of its seat belts. The affected vehicles, which were built from November 20, 2013 to January 18, 2014, could have a seatbelt assembly in the middle seat of the third row that wasn't properly secured to a floor anchorage at the factory.

In total, 7,067 of the new Highlanders are included in the recall, which was discovered not after a crash, but during a post-build inspection at the factory. It's unclear if there have been any injuries as a result of the faulty seat belts.

Toyota is set to inform owners of the affected vehicles as well as dealers with the recalled Highlander models in their inventory. Naturally, repairs will be performed free of charge. For the full bulletin form the National Highway Traffic Safety Administration, scroll down.
Show full PR text
Manufacturer: Toyota Motor Engineering & Manufacturing

SUMMARY:
Toyota is recalling certain model year 2014 Highlander vehicles manufactured November 20, 2013, through January 18, 2014. The third row middle seat belt assembly might not have been properly secured to the vehicle floor anchorage during vehicle assembly. As such, these vehicles fail to conform to the requirements of Federal Motor Vehicle Safety Standard No. 210, "Seat Belt Assembly Anchorages."

CONSEQUENCE:
A seat belt that is not properly secured to its anchorage could increase the risk of injury to an occupant in the event of a crash.

REMEDY:
Toyota will notify owners, and dealers will inspect the third row middle seat belt anchor, and, if necessary, properly secure it to the vehicle floor anchorage, free of charge. The recall is expected to begin in March 2014. Owners may contact Toyota at 1-800-331-4331. 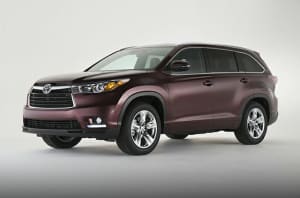