Truckmakers squabbling over who can sell Jimmy Fallon a pickup 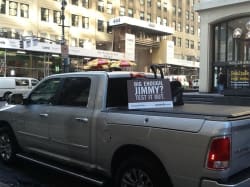 Snagging a celebrity endorsement is a big deal for automakers, as evidenced by the recent efforts of the Detroit Three to try and woo The Tonight Show's newest host, Jimmy Fallon, into one of their trucks.

After announcing during Wednesday night's show that he was in the market for a pickup truck, Fallon set off a firestorm of efforts on Twitter, with both Ford and Chevrolet petitioning the funnyman to test out a truck. According to Ad Age, Ford recommended the King Ranch edition of its next-generation F-150 while the show was still airing. Chevy, meanwhile, waited until the next morning to pitch a Silverado to Fallon.

The winner of this social media feeding frenzy, though, was Ram. Promoting a variation of its "Guts, Glory, Ram" tagline, the Auburn Hills-based manufacturer created the hashtag #GUTSGLORYFallon. It even went so far as to park a Ram 1500 outside 30 Rockefeller Center in New York, where The Tonight Show is filmed. On the back of the Ram sat a sign, reading "Big enough, Jimmy? Test it out," referencing a joke from the Wednesday show.

Which truck do you think is best for Fallon? Let us know down in the comments.
X