The final chapter of Volvo's concept car trilogy has arrived after a few teasers earlier this week, as well as some recently leaked images, and as we so astutely summarized previously, it's a brown shooting brake. Really, we couldn't think of a better type of vehicle to follow up the Concept Coupe from the Frankfurt Motor Show, the Concept XC Coupe from the Detroit Auto Show and complete the Swedish trinity of concepts.

It's best to think of the Concept Estate as the hipper, classier cousin to the Concept Coupe. The two are virtually identical below the beltline, featuring front fascias that are indistinguishable from each other (except one is, you know, brown). Both cars wear wide, rectangular grilles inspired by classic Volvo models and T-shaped headlights Where the Concept Estate differs, obviously, is with its more functional rear end and longer roof. 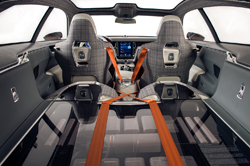 That rear is accented by the Estate's wide haunches and slim, angular taillights, which borrow heavily from the units shown on the Concept XC Coupe. These two features work in tandem to present a wide, squat appearance from the rear. The profile, meanwhile, shows off that spacious greenhouse, which is made even airier by a glass roof.

The interior of the Concept Estate is it's own special piece of design. The highlight is Volvo's new user interface system, which we'll be detailing in its own post later on. Aside from that, the materials chosen and the overall layout is simply gorgeous. The lining of the seat backs and headlining is wonderfully funky, and contrasts perfectly with the orange seatbelts, orange carpets and white leather. Naturally aged wood and machined copper accents round out the interior style.

Unfortunately, there's no mention of what sort of powerplant sits under the Concept Estate's long, low hood. Here's hoping it's the same monster that was promised in the Concept Coupe.

Take a look below for the official press release and a video of the Concept Estate, and then hop up top for a small gallery of images. We'll have more on the latest concept from Volvo when it makes its official debut at the 2014 Geneva Motor Show.

After unveiling two applauded concept cars in the Concept Coupe and the Concept XC Coupe, Volvo Cars will use the Geneva Motor Show to uncover the final car in a series of three, revealing where Volvo is heading in the very near future. The new interior design language, the Stutterheim collaboration, the large portrait touchscreen and the intuitive new user interface manifest how Volvo put Scandinavian creativity at the core of its new design strategy.

"Creativity is thriving in Swedish society. This includes design and technology as well as the fashion, music and arts. This inspired us to create a new, exciting way to express Sweden's soul," says Thomas Ingenlath, Senior Vice President Design at Volvo Car Group.

Under Ingenlath's direction, Volvo Cars is undergoing a transformation, and the Concept Estate is his bold interpretation of the most classic Volvo heritage – the estate car. The exterior echoes the design of the iconic Volvo 1800 ES from the early 1970's, but with modern features such as the low bonnet, a glass roof, the new 'floating' grille and the T-shaped DRL light guides. While the silhouette is a powerful display of Volvo's new proportions, the most striking feature of the Concept Estate is the inside of the car.

With this car, Volvo reveal, for the first time, how the interior of Volvo's upcoming models will both look and function. The Concept Estate's most prominent interior design feature is its simplicity, utilizing exclusive materials and bringing the driver cutting edge technology and authentic craftsmanship in perfect harmony. The traditional selection of buttons and controls have been replaced by one large tablet-like touch screen control panel in the center console, bringing the interior firmly into the 21st century.

"We have created a digital environment that is fully integrated in the car. The basic idea is to organize controls and information in a perfectly intuitive way, making the drive more enjoyable, efficient and safe. Everything is exactly where you expect it to be, and available at the touch of your finger," says Ingenlath.

The touch screen will be the main control panel for Volvo's new in-car user experience. It replaces all buttons and controls except for a few crucial functions such as volume, play/pause, hazard warning and window heaters. It also interacts seamlessly with the adaptive digital display in front of the driver. "Not having to deal with buttons and controls for a growing number of functionalities is like being freed from a pair of handcuffs," explains Robin Page, Design Director Interior of Volvo Car Group.

Contrasting the cutting-edge technology is the craftsmanship, the high-quality materials and the beautiful detailing in the cockpit. The colorful trends within contemporary Swedish design has inspired the orange seat belts and the woven wool carpets from Swedish designer Kasthall, and Volvo's collaboration with the Swedish fashion scene is manifested by two exclusive Stutterheim raincoats in the back of the car. The trunk also holds a specially designed "kubb" game set, offering people a piece of Swedish lifestyle.

The interior is exceptionally confident. The glass roof and seats covered by light, soft leather help to retain that bright and cosy feeling that is the hallmark of a Swedish living room. The crystal gear leaver from Kosta Boda, a recurring feature in all three concept cars, has an orange glow, giving ambience to the room – and the instrument panel is covered by thick, naturally tanned saddle leather from Tärnsjö with inlays made of naturally aged wood and machine copper details.

Volvo Car's new design language and the groundbreaking driver experience will be introduced in the next car generation, starting with the all-new Volvo XC90 revealed during the fall of 2014.