Everything You've Wanted To Know About Lambo's Gallardo Replacement We're comfortable ranking the new Lambo with a score of "Monica Bellucci" on the scale of Italian hotness.

We're fresh from the heart of the Lamborghini headquarters in Sant'Agata Bolognese, Italy, where Italian and German executives have been beaming like proud papas in front of their soon-to-debut Huracán LP 610-4. The successor to the ultra-successful Lamborghini Gallardo will have its coming out party at the Geneva Motor Show next week, but there's no need to wait any longer for the details of this hotly anticipated model.

We, like many of you, have of course seen the Huracán in photos and videos before now, but it's safe to say the that the car makes a far stronger impact in the metal than it does in pixels. While the bodywork doesn't lack for the kind of metal origami that made the Gallardo so attractive, the Huracán contrasts areas of soft curvature against hard lines to great effect. We're comfortable ranking the new Lambo with a score of "Monica Bellucci" on the scale of Italian hotness (for those grading at home, that's just one below "Sophia Loren").

Designer Filippo Perini described the overarching hexagonal theme to the design details, pointing out that even the shape of the bodywork around the windows (which he referred to as the "Egyptian Eye") was penned with six sides. Continue to look at images of the Huracán and you'll see hexagons inside and out, with the interior especially bedecked with similarly shaped accents. The bodywork functions as well as it attracts, too, with a three-percent reduction of drag versus Gallardo and a whopping fifty-percent increase in downforce – all without using active aerodynamics, we should point out. 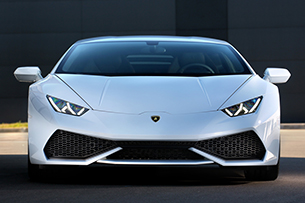 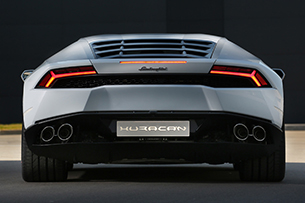 We're compelled to mention that the Huracán interior is simply one of the nicest that we've yet had the chance to sit in, full stop. Material quality is absolutely impeccable based on sight and touch, with a remarkably subtle mix of brushed and satin surfaces serving as backdrop for the drama of bits like the starter switch and the sexy new steering wheel. Lamborghini is especially proud of that wheel, which integrates controls for the new "ANIMA" drive mode switch, wiper and indicator controls, and more. With the resultant loss of traditional stalks behind the wheel, new, larger shift paddles are easy to reach for and a joy to behold.


The Huracán interior is simply one of the nicest that we've yet had the chance to sit in, full stop.

We might all "eat with the eyes" first, but Lamborghini fans and potential customers are likely to be primarily concerned with the motivating force that lies underneath that louvered rear window. For the Huracán, that engine is a new, naturally aspirated 5.2-liter V10 that sounds like the hammer of the gods based on the few blats we were treated to. Lamborghini has a new tech called Iniezione Diretta Stratificata (IDS) that combines traditional fuel injection with direct injection, yielding gains in both output and economy compared with the Gallardo's mill. That all means the new powerplant is good for an impressive 610 horsepower at 8,250 rpm and 413 pound-feet of torque at 6,500 rpm, with an expected fuel economy average of about 19 miles per gallon.

The new engine is mated to an equally new, seven-speed dual-clutch transmission that the Italians have dubbed Lamborgini Doppia Frizione (LDF). Designed to serve as the perfect companion for driving styles ranging from passive to racing, we're told the overriding characteristic of the LDF trans is "smooth shifting without any kind of torque interruption." When set in Corsa mode, the LDF will also preselect gears for ultra-quick downshifts, and offer launch control. 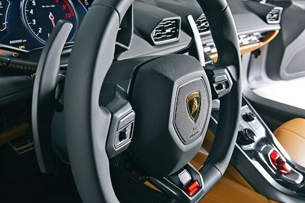 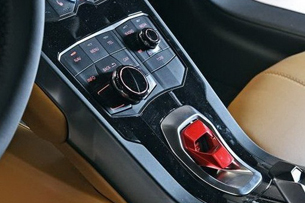 With the new engine and transmission, Lamborghini was more than happy to quote some very impressive initial performance figures: 0-62 miles per hour in 3.2 seconds, 0-124 mph in 9.9 seconds and a top speed of "more than 325 kilometers per hour" which means better than 202 mph. If you like your Lamborghinis fast, this one'll do.

On the other end of that equation, the supercar company hasn't forgotten that a quick car must stop well. Brake rotors are carbon ceramic all around, with 15-inch (380mm) diameter units in front and 14.2-inchers (360mm) out back. Accordingly, the stopping distance from 62-0 mph is said to be a remarkable 31.9 meters (104.7 feet), or 1.1 meters better than the Gallardo.

The lighter-weight construction also nets gains in handling for the Huracán, as well. The car uses a fully electronic all-wheel-drive system, with a default toque split of 30/70 front/rear, and the ability to send up to 50-percent of twist to the front wheels, or 100 percent to the rears. Lamborghini has also partnered with Pirelli to create a unique set of P-Zero tires designed to offer a near-perfect balance of grip and comfort for Huracán drivers. Should something more aggressive be required, we're told that Pirelli will be happy to sell you a stickier set of P-Zero Corsa slippers for what is likely to be a rather obscene amount of money. Rubber wins races, don't forget. 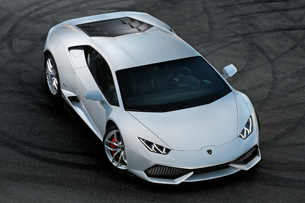 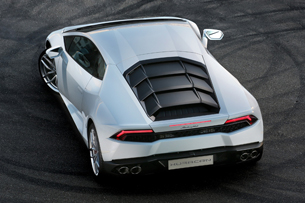 As we alluded to earlier, the Huracán is also set to make use of Lambo's new ANIMA management software. The Italian word for "soul" is also an acronym for Adaptive Network Intelligent MAnagement (future trivia question), and offers driver selectable modes that alter steering effort and response, transmission and engine mapping, all-wheel-drive systems and the magnetorheological dampers. Set to the race-ready Corsa mode, ANIMA helped the Huracán lap the Nardo circuit some two seconds quicker than a Gallardo LP 560-4 (and Lamborghini's test driver considers that gap to be very conservative).


Execs see more than 1,000 units in 2014 as an easy target, with first shipments starting just after June.

The Gallardo may be the most successful Lamborghini of all times in terms of sales figures, but the company fully believes Huracán will eclipse it on that front. With over 700 cars pre-sold already, Lamborghini seems confident that it could best the Gallardo's one-year sales record of 1,844 deliveries in 2008. Execs see more than 1,000 units in 2014 as an easy target, with first shipments starting just after June in all markets. We still don't know what the starting price of the car will be in North America, but European buyers will be looking at a base cost of 201,000 euros – around $275,000 USD – which ought to add a whole lot of cheddar for Lamborghini and the Audi group.

There is, of course, even more granular information to be found out about the Lamborghini Huracán LP 610-4 in the press release below. Drink deeply of the attached photo set, and then feel free to dive in. Of course, expect us to be bringing you more, better live images of the car from the Geneva show next week, as well.