View All Specs
I absolutely love to travel, but man, do I hate flying. Not the act of flying itself, but air travel in general – slogging through the airport, dealing with security, fighting with delays, only to finally be crammed like cattle into a too-small airplane seat where you're offered $8 sandwiches that are half-frozen. (Okay, it's not always that bad, but still.)

So when I was tasked with attending the launch for the 2015 Subaru WRX STI in Carmel, CA, I had a choice to make. I could fly into San Francisco and find my own way down to Carmel, or I could grab a turbo-prop out of SFO and fly directly into Monterey. And since you're reading about all of this in a car review, it's pretty obvious which option I chose.

The current BMW 5 Series isn't a new car, despite receiving a couple of updates for the 2014 model year. But what is new is the 3.0-liter turbodiesel inline six-cylinder engine found underhood, borrowed from the larger X5 xDrive35d and also seen in the upcoming 740Ld xDrive. It's a honey of an engine, and here in the 5 Series, it makes for a truly first-class experience. 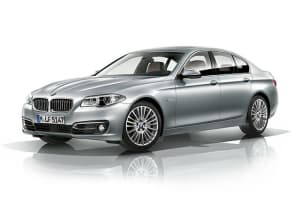