A conversation with GM's Mark Reuss on MPG, aluminum and Corvettes

Sometimes the person and the job are a perfect fit

Gary Witzenburg
There was plenty to talk about when General Motors hosted its annual mid-December holiday media reception a few months ago. GM had just decided to pull its global Chevrolet brand out of major European markets, where Chevys have competed directly with GM Europe Opel and Vauxhall vehicles, and the US government had sold its last remaining shares of GM stock.

But most important was the company's just-reshuffled leadership. Post-bankruptcy CEO Dan Akerson had announced that he would step aside and that 52-year-old Mary Barra would replace him on January 15. Not only would she be the first woman to lead a major automaker, she would also be GM's first engineer CEO since Bob Stempel in the early 1990s.

Replacing her as executive VP for global product development (and purchasing and supply chain) would be 49-year-old Mark Reuss, who had served a stellar four years as North American president, and elevated to corporate president (from executive VP and CFO) would be 42-year-old Dan Amman. All three are relatively young auto enthusiasts who are liked and respected inside and outside the company, and their collective talents and experience are highly complementary.

I've interviewed Barra and found her smart, personable and knowledgeable, though she carefully walks the corporate line in speaking and answering questions. I met and chatted with Ammann for the first time at that holiday reception, and he made a good first impression. But I've known Reuss for some time as a genuinely good guy and a highly capable and inspiring leader, and I believe he is exactly the right person for the global product responsibility once famously held by the outspoken, oft-controversial Bob Lutz.

So I jumped at an opportunity to join a group interview of Reuss (with mostly business reporters) at the Detroit Auto Show in January. It was an interesting session of mostly good questions, which he answered with refreshing candor and humor.

"I look at 2013 and 2014, as the retooling of General Motors," Reuss said. "We've taken down almost every plant in North America, converted and turned it this last year, and to do that with award-winning vehicles and pretty flawless launches is key. We have to keep the train rolling on great product, because the rest won't happen without the best product, period."

A reporter asked whether GM was pushing big trucks, SUVs and Corvettes again because gas is cheap. "No," Reuss said. "We are drastically changing the efficiency of these products. We have a Spark BEV, and a truck V8 that gets better fuel economy than a [ Ford] Ecoboost V6. You saw [Ford's next F-150] aluminum truck introduced today, and we will also have a lot of game changers: a 193-horsepower direct-injected 4-cylinder mid-size truck that will be highly efficient, a Cadillac CTS with aluminum doors and no more V8s. Those are big, fundamental changes from where we were, and they cost a lot of time and money to retool." 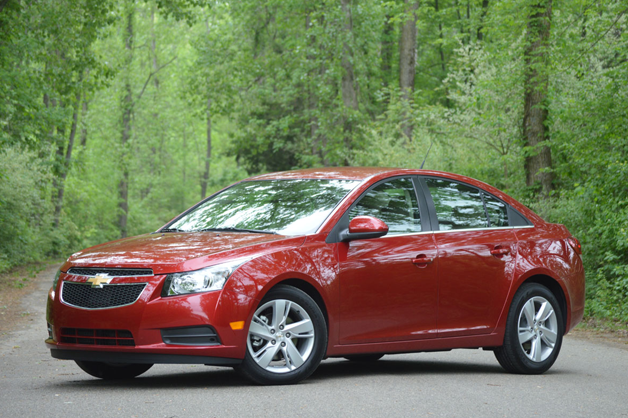 "You're going to see more diesels."

I asked where extended-range electric powertrains might be going beyond today's Chevy Volt and Cadillac ELR. "First things first," Reuss said. " Do you think four years ago our leadership would have done a diesel Cruze? The answer would have been, 'No, diesels are stupid. We're not doing that.' But we are doing that, and you're going to see more diesels. And what we're doing with extended-range electrics is not the only formula. We'll see some diversification around that, and I think it will mature into other things that are quite interesting."

Some other interesting questions and answers from the 30-minute session:

MR: "We're well aligned in the company on that. For me, it's quality, innovation and product excellence. The quality piece covers a lot of things, not just initial quality but also reliability and durability. On innovation, there is so much more to do, including taking some risks ... a lot we can do with suppliers that can lead to really positive things in product, quality and innovation. So our supplier partnerships are really important. We've started on our journey there, but there is a lot more to do. And the product excellence piece means winning everywhere we compete."

Why is GM bringing out new mid-size pickups when everyone else but Toyota and Nissan have dropped them?

MR: "This strategy is not risk free, but there is a really well-thought-out agenda on it. I feel pretty good about the fact that no one else is doing it." 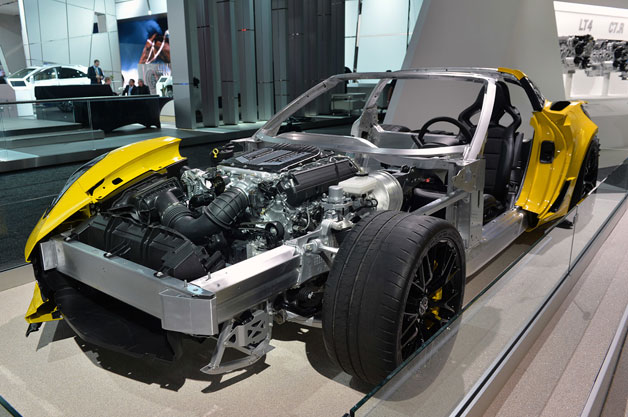 Is using more aluminum in vehicles a GM strategy?

MR: "I wouldn't say it's a strategy. The Corvette Z06 with its completely aluminum architecture is a good window into how deeply we can go into that when we choose to. It has a 60 percent stiffer structure because we wanted to be able to take the top off and run 625 hp and 635 pound-feet of torque, and race it. That's one extreme. The other is the CTS with aluminum doors. We've brought that car in 200-300 pounds lighter than a BMW, and it scores five-star safety ratings. That car is an engineering tour de force, but the aluminum is just one element of it. I have a lot of confidence in the way we've changed this company into a company that defines some segments by mass, instead of doing the heavy cars with big powertrains that we used to."

How much of what you're doing for fuel economy is due to government regulation and how much to customer demand?

MR: "Good question. On the 10-year long horizon, the government piece is probably 50 percent. On the five-year near-term horizon, probably more like 30 percent. You have to start spending and designing now to get these architectures and engines in place in 10 years. That is really, really important in trucks, so we worked very hard to get that V8 to beat the [Ford] V6 EcoBoost. We've taken mass out and dialed a lot of cost into these new full-size SUVs to make them pretty efficient big utilities, and our new Gen V engines - with direct injection, variable valve timing, and Active Fuel Management [cylinder deactivation] - breathe new life into that segment. Fuel economy is absolutely critical in the midsize car segment, and even our Corvettes will get close to 30 mpg on the highway. That's remarkable, and people love it."

But you're focusing on large-displacement engines.

MR: "Not true. We have great trucks with V6s and V8's, but you don't know yet what we'll have with the gas and turbodiesel four-cylinders, and the V6, in midsize pickups. That's a completely different powertrain lineup. And our Cadillacs are all small-displacement turbocharged four and V-6 engines in very light cars, not large displacement anymore."

Whether you like GM or dislike it for political or past bad-product reasons, I'm now feeling very confident about the product direction in which these new leaders will take it.
X