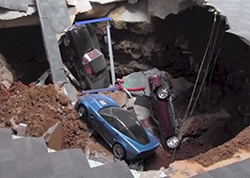 Today's big news has been the 40-foot sinkhole at the National Corvette Museum in Bowling Green, KY, that swallowed eight rare Corvettes, including two that were on loan from General Motors. After initially announcing that the rest of the museum would be open today, authorities then served notice that the entire museum would be closed for the day while they figured out what to do next.

Evidently, 'what to do next' includes moving other cars in their collection that might be at risk due to the sinkhole. Because the museum operates so many webcams, it's been possible to follow the action unfolding live. Teams of people have been pushing Corvette display cars of all years and descriptions through the museum's carpeted halls, but it isn't immediately clear where these cars are going. Thanks to Autoblog reader Arnold A. and the folks at Jalopnik, we've got some choice screencaps of the action in our gallery.

The museum was alerted to the appearance of the sinkhole when motion sensors went off at 5:44 AM this morning. The 25- to 30-foot deep void has decimated a key attraction at the museum. Unfortunately, the webcam inside the Skydome is either not working as a result of the sinkhole or has been intentionally disabled. Either way, the Enthusiast cam will still provide you with a glimpse at its entrance. According to reports, structural engineers are now on site to assess the damage. The story is still developing, and the condition of the cars trapped in the hole is still unknown.

UPDATE: The National Corvette Museum has uploaded its first video of the sinkhole - check out the carnage below.

UPDATE: We now have many more images and new videos of the sinkhole, including security camera footage showing when the sinkhole formed and R/C helicopter footage of the aftermath. Check it all out in our followup post here.