How many Toyotas are potentially affected by seat fabric problem? 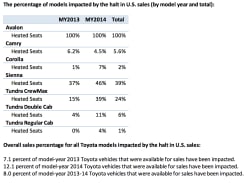 When we reported yesterday on Toyota's stop-sale order of certain 2013 and 2014 models due to an issue with the fabrics on models with heated seats not conforming to flammability regulations, one of our many questions was how many vehicles were affected? More importantly, how many of those cars have already found homes?

Kelley Blue Book has the troubling statistics. Every 2013 and 2014 Avalon features heated seats. 6.2-percent of 2013 and 4.5-percent of 2014 Camry sedans, meanwhile, were sold with heated seats. That doesn't seem as bad as 100-percent of the larger Avalon, until you consider the Camry's huge volume - the 5.6-percent average still accounts for a lot of cars. Sienna minivans are heavily affected as well, with a total of 37-percent of 2013s and 46-percent of 2014s fitted with butt warmers. The stop-sale only affects 7-percent of 2014 Corolla models, but like the Camry, that number is rather misleading due to the sheer volume of cars Toyota moves. You can see the entire breakdown of percentages by clicking on the inset image.

According to Karl Brauer, a senior analyst for KBB, this problem comes at the worst possible time. "Given that much of the US is currently in the grips of a record cold snap, there's sure to be high demand for models with seat heaters," Brauer notes. The stop-sale order is a good first step, but it doesn't do anything to inform consumers who currently own the affected models and may, in these frosty temperatures, want to use their seat heaters. "Should owners of those vehicles stop using the seat heaters?" Brauer asked.

To its credit, Toyota is showing that it learned its lesson when it comes to these sorts of quality issues. "[Toyota] seems intent on doing everything it can to allay consumer fears about what at this stage is only a potential problem," said Jack Nerad, executive market analyst for KBB. That sentiment was echoed by Eric Ibara, the director of residual value consulting for the firm. "Toyota has learned from its experience with unintended acceleration that it needs to proactively take charge of safety issues involving its products," Ibara said.

As always, when more information about this issue becomes available, we'll be sure to let you know.
X