Tucked down an alley in Stuttgart, Germany, is an unmarked gray warehouse that hides an impressive collection of rare and priceless Porsche models from the automaker's past. Technically, the 100,000 square foot climate-controlled facility is a storage area for the Porsche Museum that is located a meandering 10-minute walk away. But unlike the very public museum, which has welcomed over two million visitors since it opened in 2009, the storage facility is private and entrance is strictly controlled.

I was very fortunate to be offered a private tour, with camera in hand, during a recent visit to the city. 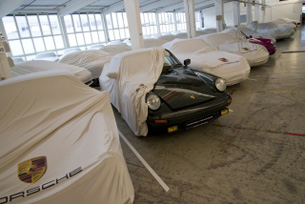 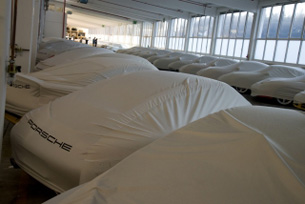 Clashing patched tile and concrete flooring, mismatched opaque windows, exposed fire suppression systems and heavy-duty industrial shelving is immaterial when you consider that the warehouse is simply a constantly changing holding area for Porsche's retired racecars, show concepts, development mules, prototypes and engineering displays. All told, there are currently 518 vehicles in the museum's collection, but the polished public facility only has room to properly display 85 at any one time. With the exception of the approximately 100 or so vehicles scattered around the world (e.g., special exhibitions, historic races and undergoing restoration), the balance of the collection is stored in the warehouse. My guide said that there were 336 models currently in the building.


Most of the vehicles are in running condition, topped-off with vital fluids and with their batteries kept optimized.

Stepping from a bright and sunny crisp winter afternoon into the naturally lit warehouse was a bit surreal. Various Porsche models, some covered and others not (but none appeared dusty), stretched in all directions. The facility was spotlessly clean, but there was an overpowering smell of used motor oil, rubber and fuel. I questioned a curator and he disclosed that most of the vehicles are in running condition, topped-off with vital fluids and with their batteries kept optimized on a large rack of trickle-chargers.

The variety was astounding; the haphazard placements parked 200-mph GT1 LeMans winners directly across from field tractors and salvaged Rothman 959 shells next to 986 Boxster show displays. There were 924 models stacked three high in the center of the room, and an orange 934 blocking another aisle. A full-size "Sally" mock-up, built on a chopped 2002 996 for Disney-Pixar's "Cars" movie, sat smiling in one room. 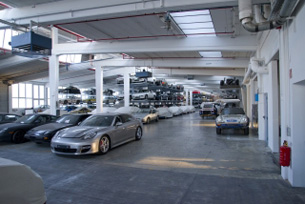 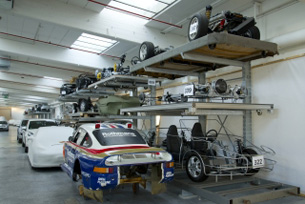 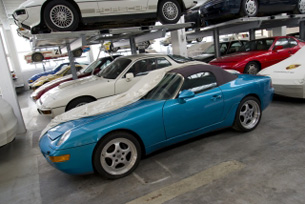 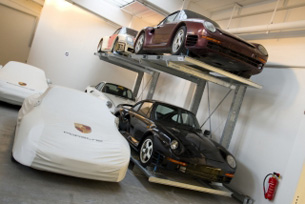 Pulling back a cover revealed the original 959 "Gruppe B" Concept.

While each and every vehicle (whole or part) told a story, there were some that really caught my eye.

Pulling back a cover revealed the original 959 "Gruppe B" Concept (below left), which was unveiled at the 1983 Frankfurt Motor Show (I actually had a picture of it on my bedroom wall). With the exception of a temporary gold BBS rear wheels, the pearly white car appeared nearly unchanged more than three decades later. It is interesting to note that the show car is missing the tell-tale air vents in front of the front wheels, and the engine intake scoops just aft of the doors, which later distinguished the low-volume production supercar from its standard siblings.

High upon a rack, below the exposed driveline of a 911 Turbo, was the bodytub of a Volkswagen "Schwimmwagen" (below right). The World War Two amphibious vehicle was based on the civilian Volkswagen Beetle. In fighting trim, the four-wheel-drive vehicle was powered by a four-cylinder engine rated at just 25 horsepower. While it had a retractable screw propeller for water use, the front wheels doubled as rudders, which must have made turning an interesting maneuver. Of the 15,584 examples made during the War, just 1,308 were made by Porsche. 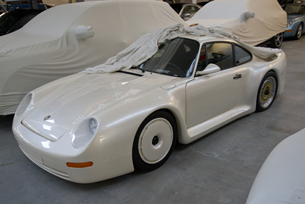 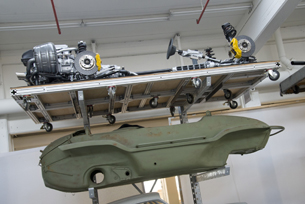 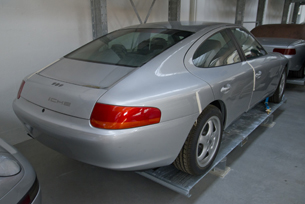 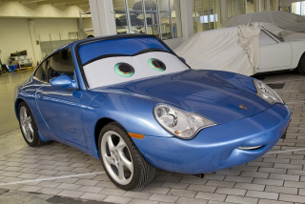 This heavily disguised and completely badge-free prototype gave no hint of what was shoehorned in its tail.

​I found an early predecessor to the Panamera under a rack. The silver four-door 989 Concept was designed in 1988. Face-to-face, the vehicle looked like an awkwardly stretched 996 model (even though that particular model was still a decade in the future). While it appeared to hide an engine under the long rear decklid, the concept was fitted with a front-mounted, water-cooled V8 that was likely borrowed from the 928 of the same era. Slumping sales of the 928 killed the 989 program in the early 1990s, and we had to wait more than another decade for the arrival of Porsche's first four-door sedan.

My favorite hidden jewel was a matte black hybrid mix of a 993 and a 959, which I spied hidden under a tarp (below left). At first I figured it was some sort of 959 mule, which really sparked my curiosity, but its front clip was too new. I asked a curator who smiled as he opened its rear decklid to reveal a 3.6-liter V8 sourced from a first-generation Audi V8 (below right). Even in the face of those countless rumors of an upcoming V8-powered 911 model that started decades ago, this heavily disguised and completely badge-free prototype gave no hint of what was shoehorned in its tail. (There were two more of the "these-are-not-what-they-appear" vehicles in storage, but we'll post those up on Facebook over the next few days to see if anyone can guess what they really are.) 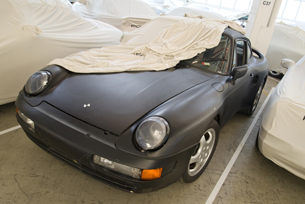 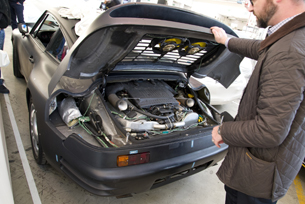 Even after a couple of hours roaming, I left feeling as if I had only scratched the surface of what's inside the building. I'd estimate that maybe half of the collection is exposed, but there are countless gems hidden beneath each of the cloth car covers that I never had the opportunity to peel back and even view. I need another tour - lasting about a week, next time.

If you have any questions about a particular vehicle in our high-res gallery, please ask in our comments section and we'll do our best to answer.