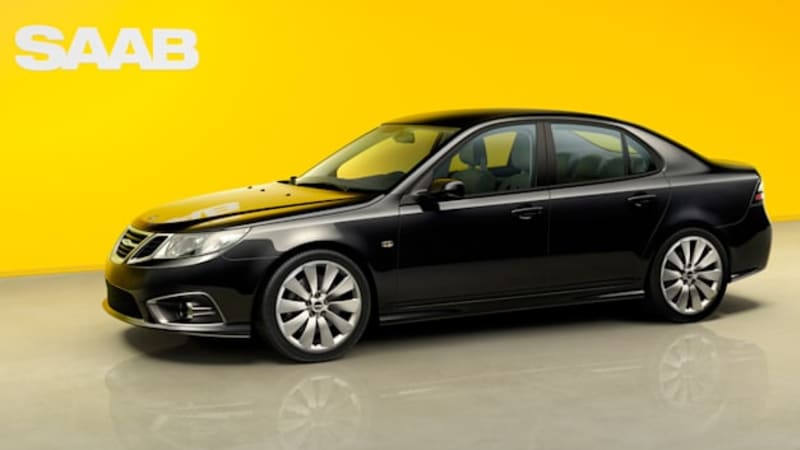 Saab is officially building cars again. Production of the 9-3 Sedan has kicked back off in Trollhättan, Sweden, and the first example is reportedly earmarked for the company's museum. Initial sales are targeted for China, although Swedish customers will also be able to buy new Saabs built in their country right away, too. It isn't immediately clear if the model will be available in the rest of Europe, let alone in North America.

The initial run of 9-3s will be powered by a 220-horsepower, 2.0-liter turbocharged four-cylinder before an electric model joins the range next year. There are no Biopower or XWD all-wheel-drive models presently in production. And while the lion's share of the 2014 9-3 is a carryover from the pre-bankruptcy car, there are some changes, including a new anti-whiplash seat system and a " greater number of non-GM parts," reports SaabsUnited.

"I am very proud of the dedication and the focus that NEVS management and employees have demonstrated over the year that has passed since we became owners of the plant in Trollhättan, and who have made this possible. Swedish expertise along with Japanese technology around batteries and new lightweight materials and our Chinese group's focus on green technology is our strength for the future," said Kai Johan Jiang, the founder of Saab's parent company, National Electric Vehicle Sweden.

Scroll down for a full press release on the relaunch of Saab from NEVS, and check out our friends over at SaabsUnited, who have done an excellent job chronicling the rebirth of the 9-3, including live pictures from the plant.
Show full PR text
Production of Saab 9-3 Aero Sedan has started in Trollhättan

National Electric Vehicle Sweden AB has started production of the Saab 9-3 Aero Sedan with a petrol engine. Sales are initially focused in China with a small number of vehicles being sold directly from Nevs to Swedish customers via the Nevs' website.

The car that is produced is a high-spec Saab 9-3 Aero Sedan with a 220 hp 2.0-liter turbo, a previously recognized high-performance engine of the Saab cars.

"I am very proud of the dedication and the focus that Nevs management and employees have demonstrated over the year that has passed since we became owners of the plant in Trollhättan, and who have made ​​this possible. Swedish expertise along with Japanese technology around batteries and new lightweight materials and our Chinese group's focus on green technology is our strength for the future", said Kai Johan Jiang, Nevs founder and main owner.

"It is truly a complex mission to start a car production process which has been still for two and a half years. It is very pleasing that we have embarked on a journey where we want to and will make a difference with our partners and customers. Our electric car will be launched next year, and already today we can offer Saab cars with continued high, proven performance and quality", said Nevs' President Mattias Bergman.

Nevs' customers will be offered a first class and engaging customer experience. They will also be offered the opportunity to come to the heart of the Saab car brand in Trollhättan to take delivery of their vehicles. While doing so, they will be invited to visit our highly efficient factory with experienced and competent workers and the Saab Car Museum where they can get a flavor of our brand and vehicles.

To ensure a solid ownership experience we intend to offer service and parts distribution in partnership with Orio AB (formerly known as Saab Automobile Parts AB).

"It's been an intense year committed to ensuring Nevs' start of production. I see our established partnerships as a trustful beginning of the long term and strategic relationships we want to build together with our subcontractors", said Nevs' Purchasing Director Per Svantesson .

To ensure our high quality and the supply chain functions, the production rate will be very modest, about ten cars a week initially, and then gradually the pace will be increased to meet customers' demand.

The electric car based on the Saab 9-3 will be launched in spring 2014, with China as the first market. Nevs' partner and part owner Qingdao has initially placed an order for a pilot fleet of 200 electric cars with delivery starting in spring 2014.

Sales in Sweden, via Nevs' website, will start on Tuesday, December 10. The price is 279 000 SEK with manual transmission and 289 000 with automatic transmission. Additional specifications purchase and delivery conditions are presented when the sale starts.

Over time we will develop our customer base to expand into more markets where we see potential for growth and profitability.

Nevs' vision is to shape mobility for a more sustainable future. Our aim is to be a front runner in the automotive industry, with focus on electric vehicles, where China is our initial main market. The pace of change towards cars powered by fossil free fuels will increase and China currently has the most ambitious efforts for electrification of the vehicle fleet.