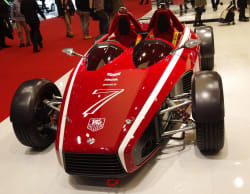 As promised, designer and boutique sports car builder Ken Okuyama has arrived at the 43rd Tokyo Motor Show, bringing a selection of really amazing vehicles along with him.

The star of the show is the Kode9 sports car, which really does highlight Okuyama's idiosyncratic way of looking at design. The coupe could easily pass for a top-effort from an Italian design house (not surprising, as Okuyama boasts a stint as director of design for Pininfarina on his resume), but the characterful face and central tailfin feel very Japanese, if not a bit Speed Racer.

Functionally, the Kode9 seems more than able to back up its wild good looks. The chassis has a central section constructed of aluminum, with carbon-fiber construction at the front and rear. Powering the vehicle is a 370-horsepower, HKS-supercharged 2.0-liter engine that looks to be of Honda extraction. The total weight of the car is just 1,962 pounds, so we'd expect that forced-induction four-cylinder to really make the car scoot.

Okuyama has also produced a lighter, racy version of his K0.7 minimalist racer (also seen in our gallery), called the Kode7 Clubman (inset). The two-seat racer has a 1.6-liter, 250-horsepower engine under its hood, and looks custom made to terrorize club racetracks in Japan.

Finally, and most winsome of all, is the high-concept tractor that the designer has created with Yanmar running gear. The Yanmar Y Concept is an attempt at optimizing visibility and sturdy construction for the working man, while also incorporating features like a GPS system. Check out the full wealth of the Ken Okuyama Design show stand in the gallery of images, or scroll down to read the brief press release about all of the vehicles and watch a video of the Kode9 design process.

At the Tokyo Motor Show today, Ken Okuyama Design unveiled two world premieres, the 'kode9' sports coupe and the 'kode7 Clubman,' which is a lightweight, spartan version of our current k.o7 model.

Inspired by legendary race cars from 1963 to 1973, the kode9 is a bold new concept that marries the best of 20th Century automotive design with 21st Century technology. TAG Heuer Carrera CMC kode9 Limited and Boston Bag designed by Ken Okuyama will be onboard the car.

Also occupying a lead role on stage are the 'kode7 Exclusive', which is a hand - built, open - top sports car and the robot - like Yanmar Concept Advanced Tractor.

In keeping with our theme for a more fulfilling and stylish 'adult car lifestyle,' we will also be exhibiting the company's latest furniture, tableware and eyewear, as well as limited edition wristwatches and bags created from a collaboration with TAG Heuer.

Part race car, part sports car, the kode9 is a concept that employs stunning but simple proportions and a driving experience to rival some of today's greatest sports cars. "This is my message to today's car industry which seems stuck in a rut of overly complicated lines and styling based on the lowest - common - denominator," says Okuyama.

This street - legal clubman racer incorporates the central section of a hydro - aluminum chassis, but with front and rear chassis sections specially designed and unique to this car in -. house developed wet carbon components, manufacturing technology using the latest 3D printers, Yamazaki Mazak's precision CNC cutting technology and the latest aerodynamic trends in a package that tips the scales at just 890 kgs.

Powered by a Japan - sourced 2.0 - liter, 4 - cylinder engine with HKS supercharger, the kode9 generates an impressive 370 hp. All suspension components are unique to this . coupe together with its fully adjustable suspension setup And with specially fitted 4 - pot Akebono brake calipers, the kode9 guarantees unlimited fun behind the wheel.

Four Created to enjoy track day events and sports driving, the kode7 Clubman is a simplified version of the kode7 that has been further lightened to optimize on - road dynamics. Priced from a more reasonable 8.5 million yen for the base 1.6 - liter model, the Clubman employs a movable front cowl and retractable headlights while doing away with driver comforts to enhance its behind the wheel thrills To achieve its driver - focused goal of creating a lightweight, attractively priced roadster, some 50% of the parts used in its construction were humed from the latest 3D printer. The model on display is powered by a 250 hp 1.6 litre 4 - cylinder engine.

Inheriting the basic architecture of the 'k.o7' sports car which debuted at the 2008 Geneva Motor Show, the revised and newly named 'kode7 Exclusive' is a hand - built, open -. top sports car that can be modified to the specifications of each owner Boasting short front and rear overhangs, the coupe incorporates lightweight aluminum and carbon fiber bodywork. With its modern, timeless silhouette and sharp, sporty overtones, the kode7 delivers motorcycle - like handling and performance from a 230 hp 2.0 liter 4 -. Cylinder engine The kode7 Exclusive may be ordered at a price starting from 25 million yen.

As part of its Carrozzeria activities, Ken Okuyama Design has teamed up with Yanmar to create the Advanced Tractor In addition to its industry - leading stylized design, this tractor boasts superb all - around visibility, while delivering operators a comfortable, yet sturdy construction that can work safely for long hours in the fields. It also incorporates an advanced GPS satnav system that will eventually enable it to work autonomously thus improving yields.

Born in Yamagata Japan, 1959. Ken has worked as a Chief Designer for General Motors, a Senior Designer for Porsche AG, and a Design Director for Pininfarina SpA, being responsible for Ferrari Enzo, Maserati Quattroporte and many cars. He is also known for numerous products such as motorcycles, furniture, robots and architecture. In 2007, KEN OKUYAMA DESIGN was founded providing business consultancy to many companies. Ken also produces cars, eyewear, interior products under his original brand. He is currently a visiting professor at several universities and also publishes many books