Race Recap: 2013 US Grand Prix, a record falls but the race fails to excite [spoilers] An estimated 113,162 racing fans joined 20 drivers as the only ones perspiring at Austin's Circuit of the Americas on Sunday, as the recently untouchable Sebastian Vettel seemed to hardly break a sweat as he raced to win the 2013 US Grand Prix. In doing so, the 26-year-old German secured his place in motorsports history with his eighth-consecutive Formula One win, pushing him ahead of racing legend Michael Schumacher, his personal hero, who had been holding the title with seven consecutive victories.

The otherwise unremarkable racing weekend started on Saturday when Infiniti Red Bull Racing secured both the pole (Sebastian Vettel) and second starting position ( Mark Webber) for the upcoming main event. While qualifying appeared to be going in Webber's favor, teammate Vettel took the lead spot in the final seconds of the session. Romain Grosjean, Nico Hulkenberg and Lewis Hamilton rounded out the top five, respectively. 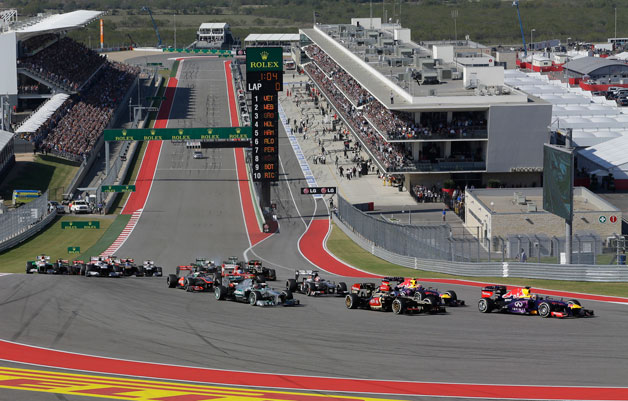 Race day on Sunday morning opened with comfortable temperatures under a nice cloud cover, but the overcast disappeared and the warm Texas sun had brought temperatures into the mid-80s by the start of the main event. The crowds filled the picture-perfect venue, enjoying the friendly hospitality of the local hosts and the smiling Dallas Cowboys cheerleaders who seemed to dominate the pre-race festivities. Unfortunately, the subsequent race would be anything but exciting.

The start was clean, with 22 cars racing up the track's signature 133-foot-tall hill towards Turn 1 (pictured above), a challenging left-hander that sets the open-wheelers up to drop down its backside (pictured below). When the dust had cleared, a lousy start by Webber had left him in fourth, behind Grosjean and Hamilton. Vettel was cleanly out in first. 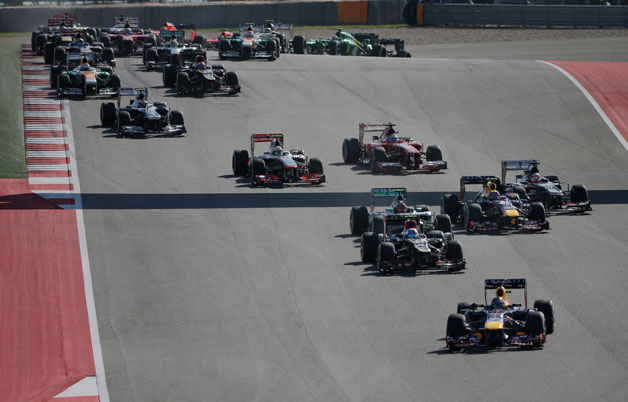 While the Red Bull car was leading the racers up front in clean air, things were happening in the crowded pack. The grid had made it around the tricky first corner without incident, but a few turns later, Force India's Adrian Sutil bumped tires with Sauber's Esteban Gutierrez. The initial impact didn't take either driver out, but Sutil was sent careening nose-first into a wall where his day came to a disappointing and immediate end. Thankfully, he climbed out of his car unhurt.

The first lap incident would be the only time the yellow appeared during the race, as the remainder of the event ran under green with the Teflon-coated Vettel leading the pack around the 3.42-mile road course with unvaried precision. He gave up the lead only briefly, to Grosjean, when he pitted to switch from medium to hard Pirelli P-Zero slicks. Other than that, the only things getting close to Vettel were the bugs being smashed on his face shield. 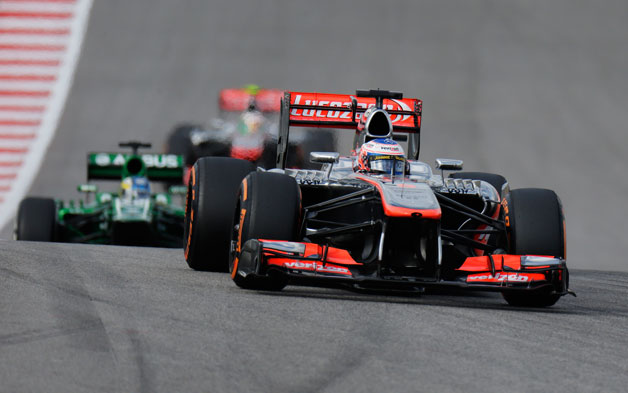 Fans were a bit disappointed with the lack of leader change, so they were left to focus on the rest of the pack. Webber eventually passed Hamilton to secure third, and Ferrari star Fernando Alonso picked off Hulkenberg to finish fifth overall. Grosjean kept his eyes on Vettel's rear splitter, and didn't take them off, to earn second comfortably.

At the checker, Vettel had finished the 56-lap race with more than a six-second lead, and he had secured the quickest lap of the day (1:39.856) in the process. The German earned more points this weekend, but his name on the Driver Championship trophy and Infiniti Red Bull Racing on the Constructor's title have already long been secured. 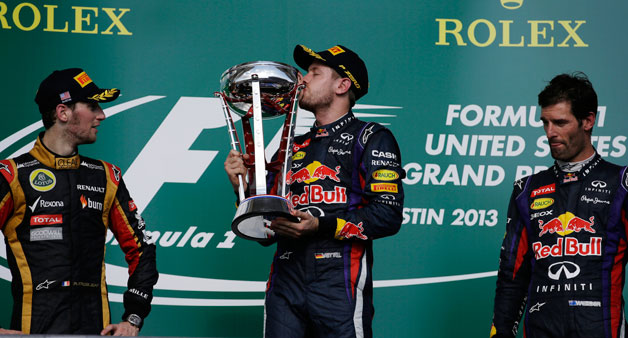 As a few thousand fans on the post-race "track walk" scavenged for souvenirs like kids collecting shells in a tide pool, the teams were already packing for the season's last race that will be held in Brazil next weekend. Let's hopd South America can spice things up.