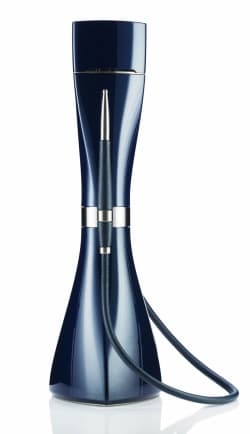 Ever look at the price of a new Veyron and wonder what they're smoking over in Molsheim? Heck, that latest special edition Vitesse costs nearly $3 million, and that's before taxes and delivery. Well, we've got the answer right here. It's a shisha pipe – the kind smoked in bedouin tents and cafés frequented by Middle Eastern gentlemen the world over – and it's branded by Bugatti.

The pipe is hand-crafted from titanium and carbon fiber (instead of the usual glass and steel) and stands about two and a half feet tall. It's made by a company called Desvall, which contrary to what you might think, is located not on the eastern or southern shores of the Mediterranean or along the Persian Gulf, but in Stockholm, Sweden.

And the price? A suitably Bugatti-like $100,000. That's a heck of a lot more than the already-outrageous $1,950 that Porsche Design gets for its shisha, which, let's face it, is basically a beautifully-crafted but overpriced water bong, to say nothing of what an average shisha would cost you in the bazaar. But we're sure there are some customers somewhere in the world who'd gladly pony up that amount to smoke a Bugatti pipe next to their Veyron in their lavishly appointed garage at the end of a sand-swept driveway. And Desvall only needs 150 of them, because that's all they're making.
Show full PR text
Stockholm- November 6 2013
Introducing the Bugatti by Desvall.

World renowned automobile manufacturer Bugatti have teamed up with luxury shisha pipe maker Desvall. The companies envisioned a shisha pipe inspired by state-of-the-art automotive materials and engineering, combined with the iconic Desvall design, craftsmanship and patented technology. The result: Bugatti by Desvall, the ultimate statement for shisha connoisseurs. Stemming from Bugatti's venerable racing heritage and the pioneering performance of the Bugatti Veyron, the Bugatti by Desvall is the quintessential modern shisha pipe. It is an extension of the exclusive Desvall shisha range but replaces the more traditional materials of glass, steel and crystal with high-tech materials from the automotive industry. Handmade in Sweden by premier artisans within their respective fields, the 80 cm tall shisha has a pure titanium frame wrapped in a special edition carbon fiber outer casing with hand sewn leather details. The Bugatti by Desvall retails for $100,000 USD and will be limited to 150 pieces.