Having trouble wrapping your head around the difference between the Land Rover Freelander (known here as the LR2) and the Range Rover Evoque? So are we. They're both smaller and somewhat less utilitarian vehicles than their traditional stablemates, and while the LR2 is priced below the Evoque, the difference in base price comes down to less than five grand.

Land Rover has apparently recognized the problem and is keen to fix it moving forward. According to reports coming in from the UK, the next Freelander is set to get a more rugged look to differentiate it from the Evoque, and will be paired with the Discovery in a compartmentalization of the Land Rover lineup.

As has been widely reported, Land Rover is dividing its range into three categories: Luxury vehicles wearing the Range Rover nameplate (including the Evoque and Range Rover Sport), Dual Purpose (comprised principally of the next Defender) and Leisure (to include the replacements for the current Discovery/LR4 and Freelander/LR2).

Of course since the Discovery and Freelander names aren't currently used in the North American market, the semantics may seem rather irrelevant, but the rapprochement between the next LR2 and LR4 could prove an interesting development. 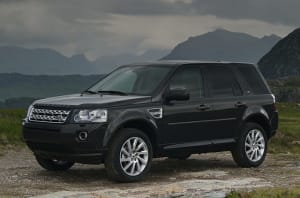