A visit to a hydrogen refueling station at Ecoful Town in Toyota City, Japan Any discussion of hydrogen fuel cell vehicles is sure to lead to a discussion of where the hydrogen is going to come from. Even though Japanese car companies have been making public strides with hydrogen for years now, the situation is no different there.

It was announced two years ago in Japan that there would be 100 hydrogen fueling stations built, "centered around four major city areas in Tokyo, Aichi, Osaka and Fukuoka" and completed by 2015, when the first FCVs are planned for mass-market sale. Last year the Research Association of Hydrogen Supply/Utilization Technology (HySUT) and the New Energy and Industrial Technology Development Organization (NEDO) together began work on three stations to test planning and viability of commercial hydrogen fueling.

The H2 station at Toyota's Ecoful Town in Toyota City, Aichi Prefecture, Japan is one of those three, and we got a closer look at it during a visit to the model village last week. Four stations are being built in Aichi Prefecture, the one in Ecoful Town being the first commercial station that operates at 70 megapascals (MPa, around 10,000 psi) in the area. It was built by Toho Gas Co., Ltd. and Iwatani Corporation (a gas and energy development and supply company), both part of that much larger HySUT/NEDO consortium of companies making the hydrogen push in Japan. The group was described to us as domestic automobile manufacturers Toyota, Honda and Nissan, as well as "13 energy suppliers" that include "utility companies, gas companies and traditional fuel producers," and for the station at Ecoful Town they've also formed a partnership with Smart Melit (Smart Mobility & Energy Life in Toyota City), Toyota City's umbrella organization looking into "low-carbon society systems" and figuring out ways to combine electricity and hydrogen in urban planning. 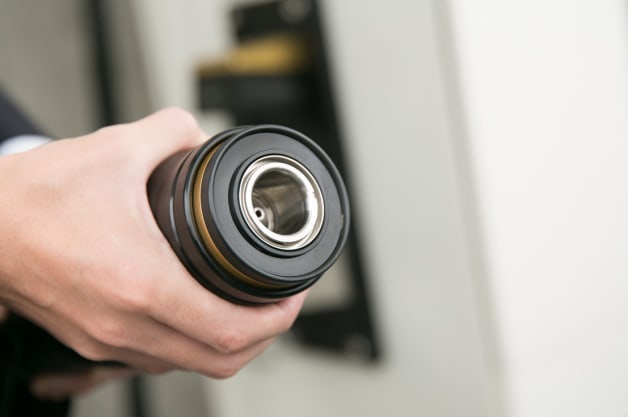 The station attends to its own needs save for the supply of gas, with every other step performed on-site. You might have guessed by the involvement of two gas companies that hydrogen is produced with the steam reformation process – methane is piped in to react with steam, hydrogen and carbon dioxide emerging as the result. The hydrogen is reformed at a rate of 1000 Nm3/h (1,000 cubic meters per hour at 'Normal' pressure and temperature – normal defined usually as 1 atmosphere of pressure and either 0, 15 or 20 degrees Celsius). It is then sent to a primary compressor which takes it to 40 MPa (about 5,000 psi) and stored in five 300-liter tanks. It is then sent to a "filling package" to be compressed at 82 MPa, after which it is sent to a cryogenic device for cooling down to between -40 and -30 C. Finally, the cooled hydrogen is dispensed at 70 MPa to either fuel cell vehicles or fuel cell buses.

High-speed filling means it takes about five minutes to fill a car. But in a ten-hour day the station can only produce enough hydrogen to fill 30 cars or six buses.

The ability to fill buses is a big deal because it means they can refill in the city center. Until the station at Ecoful Town went online, the Toyota City fuel cell buses working in the city had to go to the research building at Toyota Motor Company to refuel, which is on private property outside the center. High-speed filling at 2,000 cubic meters per hour means it takes about five minutes to fill a car, about ten minutes to fill a bus. They're trying to get the target for a car down to three minutes. It didn't look difficult to do, our demonstrator placing the nozzle onto the receiver of a Highlander FCV, pressing a button to initiate refueling, then pressing another button on the bowser when he wanted to stop fueling. The nozzle is a thick piece of kit, though – we were told that it's about twice as thick as a European nozzle because of safety regulations. It might take five minutes to fill a car, but in a ten-hour day the station can only produce enough hydrogen to fill 30 cars or six buses. That's how long the reformation, compression and cryogenics processes take.

Building hydrogen stations remains an expensive proposition: we were told they were trying to get to a unit cost of 200 million yen ($2.03M US) for a single station, but it costs about twice that amount right now, or something like four million dollars. Just as it has done with electric vehicles, the Japanese government is providing large subsidies to the H2 filling station effort; our guide wouldn't give us a number when we asked if the government was helping, but laughed and said, through the translator, "Oh, yes, big subsidies."

Customers get in on the subsidies as well, since for the moment it doesn't cost FCV drivers anything to fill their tanks – this early in the study and implementation of fuel cell vehicles, the hydrogen itself is being offered free. All they need to do is make a reservation.