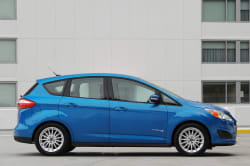 Ford will be voluntarily recalling 23,830 Focus Electric and C-Max Hybrid and Energi models equipped with push-button ignition, according to The Detroit News. Why? Because the cars don't make a noise when the driver's door is open, and are therefore in violation of federal regulations. It's not as silly as Honda's badging recall that isn't a recall, but it's close.

Actually, that's not exactly fair. The chime is supposed to come on when the driver's door is open, as it reminds drivers not to leave their cars on or leave key fobs in the car, an easy thing to forget when the cars in question make virtually no noise at idle and do not require keys in ignitions.

The recall, which Ford is conducting voluntarily, covers 2012 and 2013 Focus Electric hatchbacks and 2013 C-Max Hybrid and Energi models. The overwhelming majority, around 22,900 units, were sold in the US, while the remaining 900 units are in Canada. How many of each model are covered in the recall is not immediately clear.

Ford will be in touch with owners of affected vehicles, who will need to report to dealers for a software update.