Since it debuted this car as a concept at the 2011 Geneva Motor Show, Alfa Romeo has managed to keep the buzz alive for its 4C sports car – a huge accomplishment in its own right for this wildly adored, long suffering and eternally cash-strapped company. Being luckily stationed here in Italy as Autoblog's European Contributor, you can rightly assume that I've long been following the various and sundry ongoing dramas and products of this Italian brand. While the 4C is stunning to look at – and hopefully drive – Alfa has had me wondering whether it still has what it takes to reconquer the automotive world it once so easily enthralled.

I wonder this because, more than anything right now, Alfa needs great replacements for its 159 midsize family and a 169 luxo-sport four door, not to mention a killer sport crossover finally evolving out of the still-not-too-shabby Kamal concept first shown way back in 2003. Until the groundwork is laid out for these three key missing models, Alfa Romeo will continue its noble struggle, showing us keen glimmers of passion and hope with models like the 8C Competizione and this latest beauty. Alfa is planning to build just 3,500 4C units per annum, with initial deliveries from the Maserati factory in Modena starting at the end of this year for western Europe. Then by the end of May 2014, cars will trickle into the United States and Canada via Maserati dealerships. We Americani will get 1,200 units per year.

We've grown to know the 4C's compact, high-tech, composite plastic (a.k.a. SMC, Sheet Molding Compound) body in all of its beauty over these two-plus years. The only questionable gaffe along the way has been on the production car unveiled at the 2013 Geneva show – I'm speaking, of course, of its funky TVR-style LED headlights. The original eye design on the 2011 showcar was light-years better than this forced tech-savvy look. But that's really it so far as any notes on the exterior; the thing is flat gorgeous. 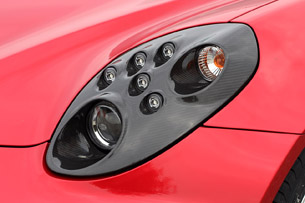 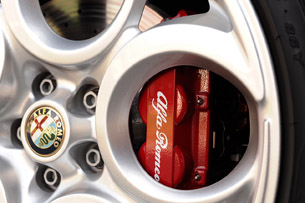 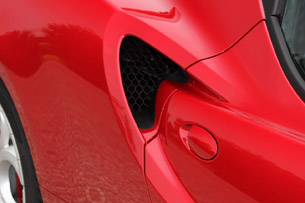 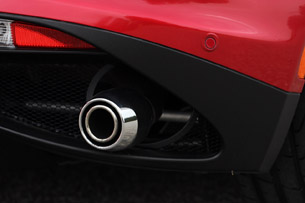 We hear that the North American version will get slightly softer around the edges (only slightly, trust me).

To drive the point home, Alfa showed up at its Balocco proving grounds and set me loose with the 4C around a dynamic portion of the Pista Alfa Romeo. Whereas the base North American 4C will likely start at around $55,000, this fairly tricked-out Sport chassis version with optional exhaust will no doubt start in the neighborhood of $63,000... if Maserati dealers resist the temptation to gouge, that is. We hear that the North American version will get slightly softer around the edges (only slightly, trust me) to accommodate our public's less impassioned passion for minimalist harder-core driving experiences.

This is why I can't help but wonder about the timing and objectives Alfa has for this 4C. Some have been wanting this eye-candy sports car to pump up its refinement and sophistication levels to rub shoulders with, say, a base Porsche Cayman or Jaguar F-Type. Cutting to the chase, the 4C doesn't really compete head-on with these two cars apart from having an equally beautiful sports car presence and stance to it, plus maybe the recently recorded Nürburgring time just a few seconds north of the eight-minute mark.

What is communicated right away while driving is that this car is feathery light.

More accurately, the 2015 Alfa Romeo 4C fills a gap somewhere between a Lotus Elise S and Evora. Driving-wise, the only missing element is the choice of a manual transmission and its pesky clutch pedal cluttering the footwell. To be fair, Alfa Romeo has made what is probably a smart business decision by committing wholly to its Magnetti Marelli-mapped, six-speed, dual-clutch gearbox with wheel-mounted shift paddles. By the time full production of the 4C is up and running to all intended markets, let's face it, the number of clients looking for a manual setup in their sports car will only have decreased even further.

What is communicated right away while driving is that this car is feathery light. It weighs in unofficially – i.e. no fluids or driver or luggage aboard and according to Euro standards – at 1,973 pounds, which would really be about 2,250 pounds while being driven on your favorite European two-lane. It'll be a surprise to all if the North American federalized model with its truer curb weight and everything on board doesn't hit 2,600 pounds or so, as it cuts between cones during track testing. That's still light in today's terms (a base PDK-equipped Cayman weighs 2,954 pounds) and the brakeset here brings the 4C to a halt really sweetly, though abruptly. There is no nose dive, just the stability of the whole car hunkering down into curves, partly a result of the mid-engine design's weight distribution of 40 percent up front and 60 percent in the rear.

The 4C managed to carve out those 300-yard-long controlled drifts of my dreams.

I spent the day honestly hashing it out at full chat on Alfa's test track, and the dynamics and responsiveness of the whole 4C package bode really, really well. The chassis was capable and friendly enough that I could ask questions of it while approaching tight curves, and play with gearing and cornering strategy to get it just right. One clear plus is that the silencer-free Race exhaust offers an incredibly great soundtrack on any ambitious drive. The twin tips do not exaggerate their role, but rather hit the nail on the head sonically in classic sports car style.

With lightness and stiffness being the 4C's crowning goals, you needn't worry about the small-ish 237-horsepower, all-aluminum, direct-injected four-cylinder being capable of coloring your world. The 21.8 psi of available turbo thrust is always exciting, and the Dynamic/Natural/All-Weather selector on the console (called Alfa DNA) adapts the drivetrain performance nicely to conditions. Hold this selector forward toward the D (Dynamic) for around five seconds, and you are in Race mode, gauge cluster turned yellow, free of traction helpers and full of throttle and gearbox nimbleness. For a few of the cresting sweepers out on the circuit, the 4C managed to carve out those 300-yard-long controlled drifts of my dreams, best done at speed in either second or third gear with the exhaust and engine howling across the countryside. There is currently no locking rear differential in the mix (brake-based traction management is Alfa's chosen path), but it was not missed on a car I now openly refer to as "the baby 458." 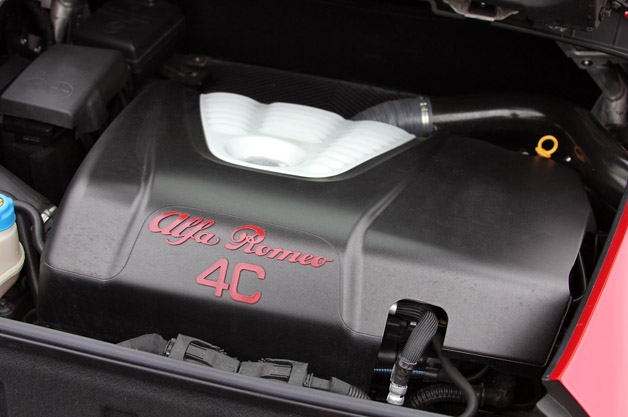 One of the big choices ... made was to leave the rack-and-pinion steering completely unassisted.

In a familiar hardcore strategy, the entire passenger tub and shell is made of Carbon Fiber Reinforced Plastic, or CFRP if you're in a hurry, with sturdy box-section aluminum substructures fore and aft. Steel is incorporated only back where the 1.75-liter transverse turbo four-cylinder is cradled. As I and it hurtled along straights, sweeping curves and too-tight chicanes, it was clear that Alfa Romeo has done exquisite work, in part because it decided long ago not to make the 4C everything to everybody. Alfa took its small budget and utterly maximized it to do whatever it could do extremely well. Even though the optional wheel-tire setup of 18s in front and 19s in back naturally creates enough additional impact harshness to make a Cayman seem like a Cadillac by comparison, it is really the only way to go here – Pirelli P Zero, 205/40 ZR18 86Y front, 235/35 ZR19 91Y rear. The standard chassis' 17s in front and 18s in back will work fine for those who buy the 4C to cruise sexily or impressively pose for neighbors, of course.

One of the big choices tech boss Domenico Bagnasco and his squad made was to leave the rack-and-pinion steering completely unassisted. If one were to choose what separates the 4C in character from any other mainstream-niche (if you will) sports car, it is this steering strategy. I haven't felt old-school purity in my hands like this in a new car in quite a while. There are pluses and minuses, obviously. First among the plusses is that it makes the 4C quite the badass in an enthusiastic driver's hands. You need arm strength and sometimes patience while maneuvering at slow speeds or parking. Out in the curves, too, you need to grip that steering wheel fully at all times with both hands, so there will be no applying of mascara or talking on the cell with one hand allowed. The real challenge comes at higher speeds on uneven pavement when the steering rack follows every whim in the asphalt. Look, you asked for feedback and Alfa has given it to you without a single filter. 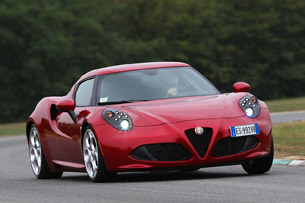 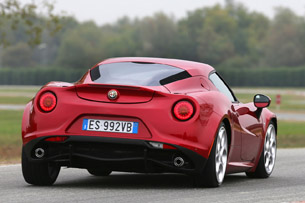 The interior is disappointing in a few spots.

While the exterior is nearly beyond any reproach the human brain can conjure up, the interior is disappointing in a few spots. The plastics, for one thing, while a little better than those of many recent Alfas, are strictly sub-par. And while we normally wouldn't ask for such things as standard-fit in a sports car, if your 4C isn't destined for full-time track life, the optional-for-Europe parking sensors really are a necessity because the car's rear vision is so bad. The lack of an available reverse camera is a bit of a biscuit-burner, as well.

Meanwhile, the seating positions and chairs themselves are handsome and fabulous work, and the extreme cocooning with driver-oriented everything is just as it should be. I do wish Alfa had spent more time on the onboard accoutrements regarding infotainment and sat-nav, because they seem essentially absent. Again, that's fine for track day heroes, but more troublesome if the car is being considered as something approaching a daily driver. Of course, Alfa has made some concessions to North American tastes – US and Canadian 4C models will come with standard air conditioning, power seats, those parking sensors and more. 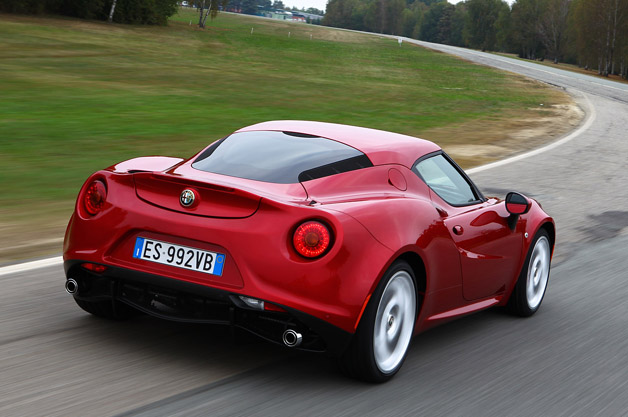 Is the 4C too focused... too bare bones? This will be a key question for Alfa Romeo, which needs all the free publicity and adulation it can get until the cars that really matter to its bottom line arrive to signal a (hopefully) much brighter future.

Make no mistake – despite any questions, the 4C is a first-rate thrill, and those who choose it will be in line for a long-promised return to hot Latin small car dynamics. It would be great to see a bunch of these club racing all over the world on weekends – Alfa needs exactly this type of brand push and enthusiasm if the 4C is going to be anything but just another pretty chapter in between long naps.