Luxury car buyers are a demanding bunch. They've got this crazy notion that just because they're spending the better part of a hundred grand on a top-tier luxury sedan, they should get the very best and the cutting edge of what the industry has to offer. That has tended to come down to the S-Class even when it had grown long in the tooth, and now that Mercedes-Benz has rolled out an all-new version, the competition is falling all over itself to release updates to keep their flagship sedans in the running. Jaguar did that just yesterday with its XJ sedan, and now Audi has revealed the latest revisions to its A8 range.

Set to debut at the Frankfurt show in just a few weeks from now, the latest A8 (and its performance version, the S8) benefits from a series of stylistic, powertrain, and technology upgrades. Among the most prominent, of all things, are the new Matrix LED headlights that can automatically lower the high-beams for oncoming vehicles, with integrated turn signals that light up to point in the direction the driver's about to turn. But that's hardly the end of the story. 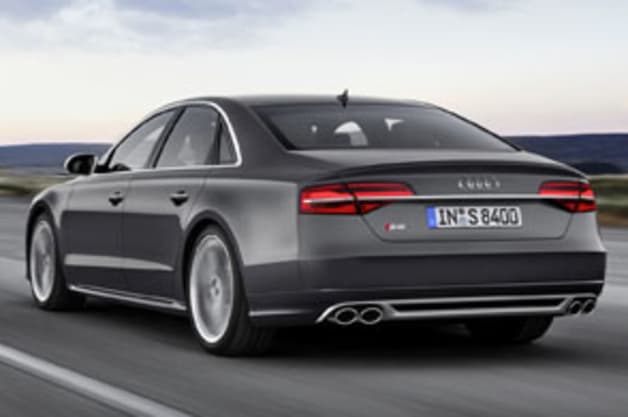 Audi has apparently reduced the output on the 3.0-liter supercharged V6 to from 328 horsepower to 310 but raised the 4.0-liter twin-turbo V8 from 414 hp to 435, which now offers a 0-60 run of just 4.5 seconds. That's just three tenths behind the S8, which remains unchanged at 513 hp, as does the 493-hp 6.3-liter W12. The 3.0-liter TDI is up from 247 hp to 258, the 4.2-liter TDI grows from 345 hp to at 385 (with a massive 627 pound-feet of torque to boot) and the hybrid that offers a combined 245 hp and 354 lb-ft. That makes for one massive array of engines globally, although only some of them will be offered Stateside. Each is mated to an eight-speed automatic transmission and Quattro all-wheel drive, but thanks to the A8's lightweight construction, it's lighter than any other all-wheel-drive model in its class.

While the size of the standard model remains unchanged, Audi has added an extra five inches to the A8 L, and upgraded the interior with new trim options. The expanding suite of electronic nannies includes new active lane and parking assist systems, a new head-up display and night vision system that can recognize larger animals as well as humans. Buyers will be able to choose from new color options, wheels up to 21 inches in diameter and even carbon-ceramic brakes for eight- and twelve-cylinder models.

The updated A8 hits German dealers in November following its debut at the Frankfurt show next month, but we'll have to wait for US availability and pricing. In the meantime you can delve into the details in the press release below.
Show full PR text
Ingolstadt, 2013-08-21
Composure redefined – the Audi A8

Systematic lightweight construction, excellent comfort and a broad portfolio of high-end technologies: Audi has given its flagship, the A8, a wide-sweeping update. The engines are even more powerful and efficient, while new assistance systems and the innovative Matrix LED headlights provide for an added level of composure.

The new A8 places Audi among the innovation leaders in the luxury segment. One great strength of the big sedan is its lightweight construction. The Audi A8 3.0 TFSI with the normal wheelbase has a curb weight of just 1,830 kilograms (4,034.46 lb) – best-in-class for models with all-wheel drive. The body is made almost entirely of aluminum; an Audi Space Frame (ASF) design, it weighs just 231 kilograms (509.27 lb).

The dynamic design of the big sedan has become even more expressive. The engine hood, the Singleframe grille and the front bumper are even more sculptured; the lower edge of the headlight units is straight. In the German market, LED headlights are standard in all models with a V8 engine. Audi also offers optional headlights featuring Matrix LED technology, which sets new benchmarks with respect to design and technology. With these headlights, the high-beam comprises 25 individual light-emitting diodes per unit that can be switched on and off or dimmed individually depending on the situation.

This enables the headlight system to react extremely precisely to other vehicles while always brightly illuminating the road. Additional features of the new headlights are the intelligent cornering light, new-look daytime running lights and dynamic turn signals. The lighting system in the A8 uses predictive route data from the navigation system to adjust the distribution of light in response to the current driving situation. In combination with the optional Navigation plus with MMI touch, the system recognizes route data contained in the navigation system, such as curves and road classifications.

The LED lamps at the rear of the new Audi A8 have also become flatter. In all models except the S8, the redesigned bumper houses two rhomboid tailpipes. New chrome strips and high-gloss black window frames round out the differentiating design details. There is a choice of twelve colors, including five new ones. Wheels are available in sizes up to 21 inches.

Performance has increased with most engines. When paired with quattro all-wheel drive, the 4.0 TFSI now accelerates the A8 from 0 to 100 km/h (62.14 mph) in 4.5 seconds. Under partial load, the Audi cylinder on demand (COD) system deactivates four of the eight cylinders. The most efficient engine is the 3.0 TDI clean diesel, which consumes just 5.9 liters of diesel per 100 kilometers (39.87 US mpg), which corresponds to 155 grams CO2 per kilometer (249.45 g/mile) All engines satisfy the Euro 6 standard. Friction-reducing measures reduce consumption by as much as 10 percent.

These variants are joined by three additional models. The top-of-the-line model is the luxuriously equipped Audi A8 L W12 quattro. Its gasoline engine is particularly short and lightweight thanks to its W layout. Displacing 6.3 liters, it produces 368 kW (500 hp). It also boasts best-in-class fuel consumption of 11.7 liters per 100 kilometers (20.10 US mpg), corresponding to 270 grams CO2 per kilometer (434.52 g/mile). It also has a COD system that was designed specifically for it. At low load, it deactivates the fuel injection and ignition for six cylinders. The available Active Noise Cancellation (ANC) ensures excellent acoustic comfort.

With 380 kW (520 hp), the S8 is Audi's big sports sedan. Paired with quattro all-wheel drive, its sonorous 4.0 TFSI accelerates the S8 from 0 to 100 km/h (62.14 mph) in 4.2 seconds. Average fuel consumption for the S8 is just 10.1 liters per 100 kilometers (23.29 US mpg), corresponding to 235 grams CO2 per kilometer (378.20 g/mile). The COD system plays a key role here, too. Active Noise Cancellation (ANC), a technology that is also used in the A8 4.0 TFSI quattro, the A8 L W12 quattro and the A8 hybrid, uses precise antiphase noise to compensate for intrusive noise in the cabin while operating on four cylinders while active engine mounts dampen vibration. The chassis and many body details reflect the sporty positioning of the S8.

The new A8 comes standard with a fast and smooth-shifting, eight-speed tiptronic. The electronically controlled automatic transmission is paired with quattro permanent all-wheel drive. Audi also offers an optional sport differential for the rear axle, which distributes the power between the rear wheels as needed. The sport differential is standard in the S8 and the A8 4.2 TDI clean diesel quattro.

The sedan owes its sporty character in large part to the sophisticated chassis. The Audi drive select system, which varies the function of various technology modules, is standard. It also controls the adaptive air suspension with adaptive damping. Audi offers the air suspension with a sporty setup upon request. The power steering uses an efficient electromechanical drive. Dynamic steering, which varies boost as a function of the speed driven, is available as an option. Carbon fiber ceramic brake discs are available for V8 models and the A8 L W12 quattro.

Another option is for 9 J x 20 aluminum-technology wheels which are based on forged support wheels. A special process joins the support wheel to a ten-spoke design element of high-strength polymer.

Hand-built character: The interior of the Audi A8
The interior of the Audi flagship dazzles with its elegant lines and generous spaciousness. Options for the front seats include ventilation and massage. Electrically adjustable, individual rear seats are available as an option for the A8 and the A8 L. The A8 L is also available with a continuous, leather-covered center console. The first-class solution here is the relaxation seat with power footrest. A large number of additional features are also available, from four-zone automatic air conditioning and power-assisted closing to a cooler.

All components in the new A8 have been carefully chosen and processed with the utmost precision. Each of the lovingly executed details documents the hand-built character of the interior. A new range of choices for seat coverings, inlays and colors is available in many areas. New additions include the woods Fine grain poplar brown-silver and Fine grain ash brown-gold natural as well as the leather Unikat, which is particularly natural-looking, soft and breathable.

As is typical for Audi, the new A8 features exemplarily clear controls despite the abundance of functions. Taking center stage is the MMI control element on the tunnel's center console. MMI navigation plus also includes a touchpad. The driver draws characters on the pad (MMI touch) to control numerous navigation and multimedia functions.

For more composed driving: the assistance systems
Driving is even more composed with the optional assistance systems. The adaptive cruise control with Stop&Go function is coupled with an expanded version of the standard Audi pre sense basic safety system. The same applies to Audi side assist. New in the A8 are Audi active lane assist, which makes slight steering adjustments when necessary, and the park assist system with 360° display, which handles steering when parking. The head-up display, which is also new, projects important data in the driver's field of vision on the windshield. The night vision assistant can now also recognize larger animals in addition to pedestrians.

Audi connect including car phone is available as a supplement to MMI navigation plus. It uses an integrated UMTS module to connect the new A8 to the Internet. Passengers can surf and e-mail freely via a WLAN hotspot. For the driver, the system delivers the tailored online services from Audi connect to the car, such as online traffic information, Google Earth, Google Street View and online news. The multimedia highlight is the Bang & Olufsen Advanced Sound System. The Rear Seat Entertainment system includes two displays, Bluetooth headphones and a DVD player.

The new Audi A8 is scheduled to arrive at German dealerships in November. Despite the upgraded trim level (standard LED headlights in all V8 models) and the powerful engines, prices are changing only slightly. Prices in Germany for the new Audi model start at 74,500 euros.

Compare the 2021 Audi A8 side-by-side against similar vehicles 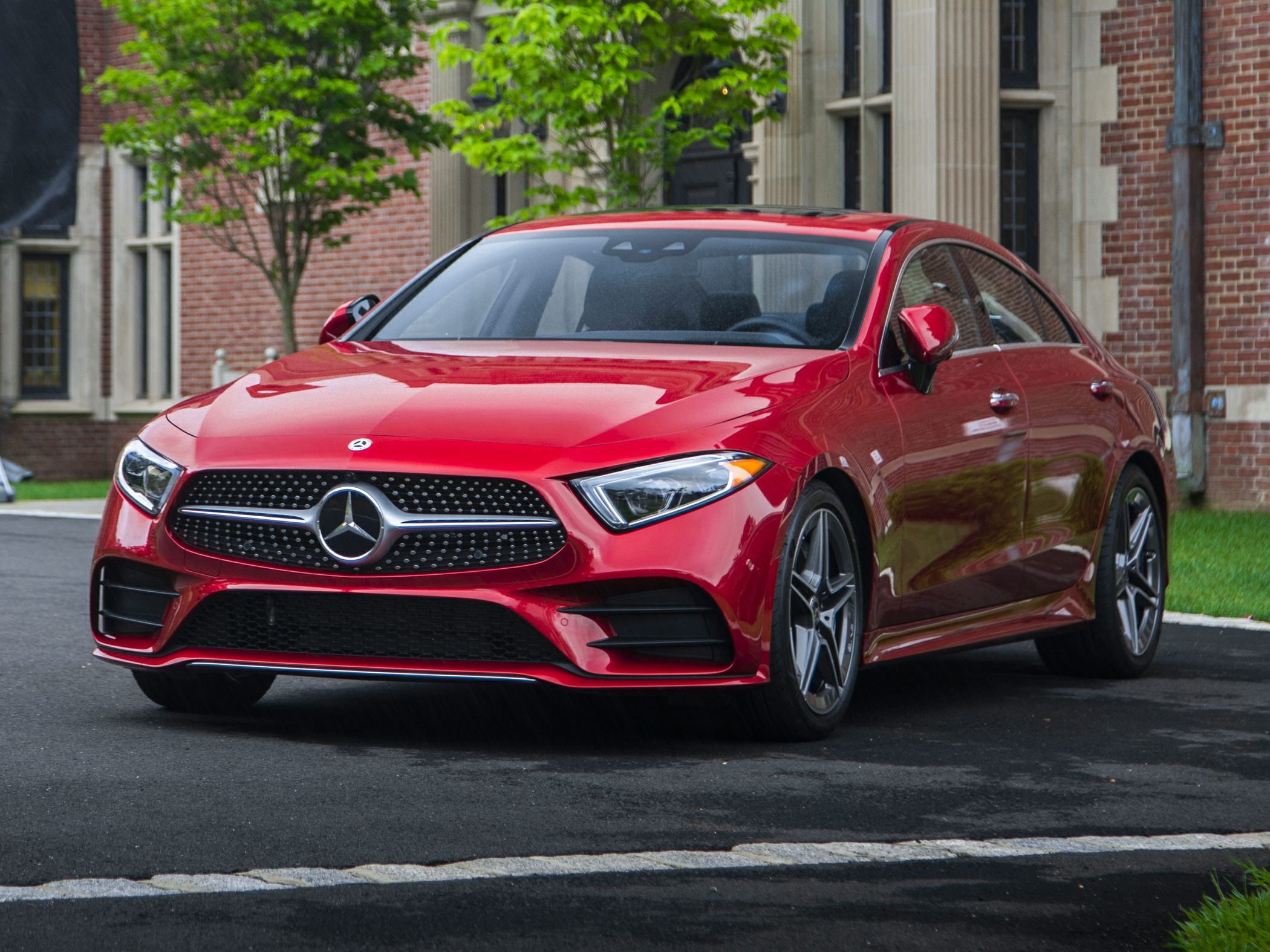