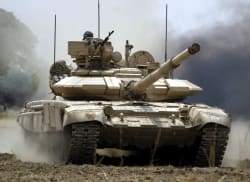 It's no secret that Russian/US relations are strained. And while things aren't nearly as bad as in, say, 1980, controversial issues between the two superpowers still exist. Thankfully, we still have the friendly spirit of competition to let off some steam. But rather than a footrace or even a game of ice hockey, this latest competition between Russia and the US will involve tanks. And explosives. We can't wait.

According to a report from NPR, during a meeting with their Russian counterparts, Secretary of State John Kerry and Secretary of Defense Chuck Hagel were challenged to a tank biathlon. Naturally, the Americans picked up Russia's gauntlet.

In a regular biathlon, the two events are traditionally cross-country skiing and rifle shooting. A tank biathlon, meanwhile, involves the tanks covering 20 kilometers of rough terrain as fast as possible, while firing on a number of pop-up targets with all the tank's weapons. That means a crack tank crew is needed to win the event more than anything else. Still, being Autoblog, we couldn't help but take a look at the two likely MBT (main battle tanks) that will be used in the competition. This also gave us an opportunity to look at pictures of tanks, which is never a bad thing.

Russia's T-90 (pictured in the inset) started production in 1992, and if the latest version is used in competition, the T-90MS, it packs a rear-engined 12-cylinder with 1250 horsepower and a top speed of around 40 miles per hour. Its main gun is a 125-millimeter smoothbore cannon that fires a variety of shells, ranging from fragmentation shells, to armor-piercing sabot shells, to good-ole-fashioned high explosives. It's secondary weapon is a .50-caliber heavy machine gun that can be controlled remotely from within the tank.

America's tank, the M1 Abrams (pictured top), has been in production since 1980. The Abrams is powered by a Honeywell gas turbine with 1,500 horsepower and 2,750 pound-feet of torque. 'Merica. It can hit 42 mph on road, but only 25 mph off-road. It's main gun is a 120-mm smoothbore cannon that can reach out and touch people with shells similar to the Russian T-90. Unlike the T-90, though, the M1 has three machine guns - a .50-caliber heavy machine gun, along with a pair of 7.62-mm M240 machine guns. There's no word when the Tanklympics will be taking place, but we can only hope it'll be televised.
X