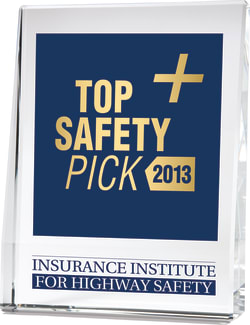 The Insurance Institute For Highway Safety has released the results of its latest small overlap front crash tests, and there's a surprise among small cars. IIHS tested 12 cars, half of which managed "Good" or "Acceptable" ratings overall, qualifying them for the the coveted Top Safety Pick+.

Top Safety Pick+ is still a fairly rare achievement since the new small overlap crash tests were instituted, as it's taken manufacturers time to design, engineer, build and bring to market cars that can score well on the new metric.

The highest scorers were the Honda Civic Sedan, followed closely by the Civic Coupe. These were also the only two to earn overall scores of "Good." The Dodge Dart, Ford Focus, Hyundai Elantra and Scion tC all earned acceptable scores overall, which was still enough to qualify them for the TSP+ rating. The bottom half of the test included the Chevrolet Sonic, Volkswagen Beetle, Chevrolet Cruze, Nissan Sentra, Kia Soul and Kia Forte.

Only 25 models have earned the TSP+ rating so far, which requires cars to earn "Good" ratings for occupant protection in four out of five tests, while scoring at least an acceptable on the fifth test.
Click through for the full press release from IIHS, as well as a video

ARLINGTON, Va. - The latest small overlap front crash test results from the Insurance Institute for Highway Safety (IIHS) reveal a range of performance among many of the best-selling small cars in the U.S. market. Of the 12 models evaluated, half earn a good or acceptable rating and qualify for the IIHS TOP SAFETY PICK+ award.

The 2-door and 4-door models of the Honda Civic are the only small cars to earn the top rating of good in the test. IIHS evaluated the Civics earlier this year and released the results in March. The Dodge Dart, Ford Focus, Hyundai Elantra and 2014 model Scion tC earn acceptable ratings.

The Civics, Dart, Elantra, Focus and tC earn the TOP SAFETY PICK+ accolade. The Institute introduced the award in 2012 to recognize models with superior crash protection. So far, 25 models earn the top honor. The "plus" indicates good or acceptable performance in the small overlap test. Winners must earn good ratings for occupant protection in 4 of 5 evaluations and no less than acceptable in the fifth test. IIHS rates vehicles good, acceptable, marginal or poor based on performance in a moderate overlap front crash, small overlap front crash, side impact and rollover test, plus evaluations of seat/head restraints for protection against neck injuries in rear impacts.

The Institute added the small overlap front test to its lineup of vehicle evaluations last year. It replicates what happens when the front corner of a vehicle strikes another vehicle or an object like a tree or a utility pole. In the test, 25 percent of a vehicle's front end on the driver side strikes a 5-foot-tall rigid barrier at 40 mph. A 50th percentile male
Hybrid III dummy is belted in the driver seat. Small cars are the fourth group of vehicles to be tested. All but the tC and Kia Forte are 2013 models. IIHS also has evaluated midsize luxury cars, midsize cars and small SUVs. Results for minicars will be released later this year.

As a group, small cars fared worse than their midsize moderately priced counterparts in the same test but better overall than small SUVs.

"The small cars with marginal or poor ratings had some of the same structural and restraint system issues as other models we've tested," says David Zuby, the Institute's chief research officer. "In the worst cases safety cages collapsed, driver airbags moved sideways with unstable steering columns and the dummy's head hit the instrument panel. Side curtain airbags didn't deploy or didn't provide enough forward coverage to make a difference. All of this adds up to marginal or poor protection in a small overlap crash."

Most new vehicles are designed to do well in the federal government's full-width front crash test and in the Institute's moderate overlap front test, but that is no guarantee of good performance in a small overlap crash. In a 2009 IIHS study of vehicles with good ratings for crash protection, small overlap crashes accounted for nearly a quarter of the frontal crashes involving serious or fatal injury to front seat occupants. In many vehicles the impact at a 25 percent overlap misses the primary structures designed to manage crash energy. That increases the risk of severe damage to or collapse of the occupant compartment structure. Also, vehicles tend to rotate and slide sideways during this type of collision, and that can move the driver's head outboard, away from the protection of the front airbag. If the dummy misses the airbag or slides off of it, the head and chest are unprotected.

That's what happened when the Volkswagen Beetle was put to the test. During impact, the steering column moved nearly 5 inches to the right as the dummy's upper body moved forward and to the left. The rotation meant that the dummy's head barely contacted the front airbag. At the same time, the safety belt spooled out too much, allowing the dummy to move forward 13 inches and hit its head on the dashboard. The side airbag didn't deploy. Instead of a curtain airbag, the Beetle has a seat-mounted combination head-torso side airbag that isn't designed to protect the head in this type of crash. All of these issues add up to a poor restraints and kinematics score for the Beetle. The Volkswagen earns a marginal rating overall, helped by an acceptable rating for structure and good dummy injury measures.

A similar problem with safety belts and airbags was seen with the Kia Forte, the worst performer for both restraints and structure of all of the small cars evaluated. Too much belt slack and a side curtain airbag that deployed but didn't provide enough forward coverage allowed the dummy's head to hit the windshield pillar and instrument panel.

In contrast, both the 2-door and 4-door versions of the Civic earn good ratings for restraints and kinematics and structure. Dummy movement during the tests was well-controlled, and both cars had only minimal intrusion into the occupant compartment, so survival space for the dummy was well-maintained.

Timing the side curtain airbag to deploy to provide optimal head protection in the crash also is key. In the Chevrolet Sonic test, the airbag deployed after the dummy had already moved toward the open driver window, leaving its head on the wrong side of the curtain airbag. The Sonic earns a marginal rating for restraints and kinematics and acceptable for structure.

"Toyota changed the airbag algorithm in the 2014 model tC so the curtain airbag would deploy in a small overlap crash. That helped boost the Scion's rating. Without the change, the tC would have had a marginal rating for restraints and kinematics," Zuby says.

The Institute didn't test the Toyota Corolla because the automaker plans to release a redesigned 2014 model in August.

The Dart was tested twice because of an on-board camera malfunction in the first test. Engineers use footage from cameras to assess how dummies move during crash tests. In the Dart retest, the driver door opened when the hinges tore away from the door frame. In the initial test, the hinges were severely damaged and the lower one tore away, but the door stayed shut. In both tests, the Dart's safety belts and front and side curtain airbags effectively protected the dummy's head and upper body, and sensors in the dummy showed little risk of injury to a person in a similar real-world crash. The Institute averaged results of both tests and downgraded the Dart's restraints and kinematics rating to marginal because doors shouldn't open in a crash. Without the issue, the Dart would have earned a good rating for restraints and kinematics. It earns an acceptable rating for structure.

Having six small cars qualify for the Institute's highest safety award broadens the choices for consumers looking to buy a small car. The latest results highlight how some automakers are designing models to perform well in the demanding small overlap test. At the same time, other automakers have more work to do.

"Manufacturers need to focus on the whole package," Zuby says. "That means a strong occupant compartment that resists the kinds of intrusion we see in a frontal crash like this, safety belts that prevent a driver from pitching too far forward and side curtain airbags to cushion a head at risk of hitting the dashboard or window frame."
X