There's an ATV slowly idling through the underbrush to my passenger side. Its rider's eyes are glued to the metallic purple bread van consuming every last square inch of the trail: a cube of glittering lunacy resting blissfully in the dappled light of a Tennessee morning.

"I ain't never seen a Mercedes up here before."

No sir, I suppose you haven't. I've spent the past three hours snaking the 2013 Mercedes-Benz G550 up and down the less-travelled trails of the Windrock OHV Recreation area, laughing maniacally as $118,355-worth of German engineering flexed, scrambled and burbled its way over the park's uncertain terrain. There are only a handful of vehicles in the world that can be equally at home pounding out triple digit highway runs, clawing up impossible loose rock ridges and stealing the show at the local valet stand. The 2013 Mercedes-Benz G550 counts itself among that select crew, and it may very well be my favorite of the bunch.

In many ways, this machine is a massive middle finger to automotive evolution. There have only been three iterations of the G-Class since Daimler first began building examples for the Shah of Iran in 1979, and the latest of those bowed in 1990. By and large, the exterior hasn't changed one ounce in the intervening 23 years and, as a result, the G550 is instantly recognizable. There's no calling this big box attractive in the classical sense, but for those of us who appreciate the subtle curve of a well-crafted wrench or the weight of a fine hammer in our hands, the G550 is beautifully utilitarian.


This machine is a massive middle finger to automotive evolution.

With a front track of just under 60 inches, the G-Wagen is nearly seven inches narrower wheel-to-wheel than its closest rival, the Land Rover Range Rover Sport, and nearly 10 inches narrower overall. That fact gives the G550 an incredibly vertical appearance that borders on the awkward, but it also means it can fit down tight trails that would be inaccessible to the wider Range Rover. Tall, flat fenders, a chrome brush guard and a steeply raked windscreen all harken back to the five-door's military past, but there are a few tricks onboard that hint to the notion that the G has softened a bit in its old age.

Chrome running boards span from fender well to fender well, though the pieces are backed by some pretty hefty steel. They work quite well as rock rails in iffy situations. Yes, that's the voice of experience talking. Look just past those boards, and you'll spot a set of side exhaust pipes dumping just ahead of the rear wheel. At first glance, the bits look like they'll be the first to suffer contact with any belly-scraping rock or log, but the pipes survived our off-road excursion without suffering too much abuse. That's thanks largely to the G-Class' wheelbase.

I'd be lying if I said I didn't spend five minutes just locking and unlocking the doors. It's a magical racket.

Engineers graced the G-Wagen with a 112.2-inch wheelbase, which gives it an excellent break-over angle. Combined with short overhangs front and rear and a set of 18-inch alloy wheels wrapped in Yokohama Geolander all-terrain tires, the SUV can't help but look both purposeful and capable.
Getting familiar with this truck's cabin starts the second you punch the unlock button on its key fob. We're all familiar with the common chime most mortal vehicles emit as the doors unlock. The G-Wagen can't be bothered to make that noise. Instead, the mechanisms announce their action with a solid metallic chorus you can hear from across a parking lot. I swear the sound borrows chords from the slide action on my favorite pistol, and I'd be lying if I said I didn't spend five minutes just locking and unlocking the doors. It's a magical racket. The doors themselves open with the press of an old school button and shut with old-school Mercedes-Benz precision. It's unlike anything else on the market right now.

While the exterior hasn't received much in the way of an update over the past two decades, the 2013 model's interior is a few millennia ahead of its ancestors. Beautiful perforated leather seats, a leather dash cover, handsome gauges and well-crafted wood veneers all work together with brushed metal buttons to create an incredibly attractive cockpit. Yes, the infotainment screen looks like a bit of an afterthought, but that's because it is. The good news is that the iPad-esque thinness and clean frame keep the screen from looking out of place. Those traits won't stop every passenger from mashing their greasy fingers all over the screen in an attempt to change the radio station. Pro tip: This isn't a touch screen.

The back seat can be a little snug in the legroom department, but the way-back cargo area features enough room for several cases of hundred dollar bills, cocaine or both. Like the side doors, the back hatch opens with all the weight and severity of a meat locker, and you almost expect to see the half-chilled carcasses of a swine or two swaying from the headliner each time you pop the latch.

Mercedes-Benz has done something downright maniacal with the G550's engine bay. There's a massive 5.5-liter V8 engine snugged down into that squared off nose, and it's good for 382 horsepower and 391 pound-feet of torque. Married as it is to a seven-speed automatic transmission and a two-speed transfer case, the powerplant can launch this 5,578-pound box to 60 miles per hour in around six seconds. Let me tell you, the sprint is downright hilarious. Get frisky with the throttle and the whole truck pitches ever so slightly as full torque piles on and those side pipes clear their throats. Americans like to make a fuss over how good we are at building boastful V8 engines. The Germans aren't so bad at it themselves.

This isn't a crossover. It's an honest SUV, and I couldn't be happier about it.

When you aren't embarrassing a Mini Cooper S from stoplight to stoplight, the G550 proves itself to be a meandering beast on the street. The steering is slow, and entering a corner with any semblance of speed will introduce you to the finer points of understeer with a quickness. While the brakes are more than capable of bringing everything in line, all that heavy glass situated way up high helps lend the big G a good bit of body roll.

But it pays to remember exactly what this machine is. Despite its coddled cabin, modern electronics and baffling straight-line speed, this is still a big solid-axle body-on-frame beast. This isn't a crossover. It's an honest SUV, and I couldn't be happier about it. That became especially true once I put the truck through 45 miles of trail through the hills just outside of Lake City, Tennessee at Wind Rock Park. The route drug across everything from smooth gravel haul roads to more technical rock scrambles, water crossings and washouts, and even included a fairly substantial hill climb.

The suspension on this truck is a work of art off road.

Even without airing the tires down for more grip, the G550 had no trouble cruising across everything I threw at it. The truck features a 4Matic full-time four-wheel-drive system complete with three differential locks. Drop the truck into low range, lock the center differential and the G will merrily scramble over just about anything in your path, but each axle also boasts a driver-selectable locker of its own for more challenging terrain. Lock all three and you could conceivably climb into and out of any situation you dared.

But what makes the G550 so impressive is the substantial amount of suspension flex built in from the factory. The suspension on this truck is a work of art off road, allowing each axle to articulate enough to keep all four tires on the ground at all times, even in the face of large rocks and deep washouts. Despite seemingly little ground clearance, I only heard the belly touch once or twice, and the substantial underbody protection kept everything safe and damage free.

Here you have the ultimate black sheep of the Mercedes-Benz flock.

The G-Class gets its name from the German Geländewagen, meaning "cross-country vehicle." Despite being adopted by wealthy housewives around the world and spending more time at the spa than fording flooded trails, the G550 hasn't abandoned its roots as a legitimate off-road titan, and I can't help but love it for its honesty. While this SUV's old bones means its on-road manners may not live up to the bar set by rivals like the Range Rover Sport, there's no denying the G-wagen's maneuverability, articulation and mechanical prowess. Throw in the heady acceleration from the 5.5-liter V8 and the raucous sound from the truck's side pipes, and here you have the ultimate black sheep of the Mercedes-Benz flock.

The 2013 Mercedes-Benz G550 starts at $113,000, plus a $950 destination fee. This tester added in a $2,300 paint job that Mercedes-Benz calls Mystic Red. Everyone else calls it purple. The Designo leather interior added on another $1,950, and a heated steering wheel bumped the final price tag up to $118,355. That's a lot of scratch to go bouncing through the woods, but it's impossible to deny the G's lure. It simply goes where you want it to go, be that to the theater or crawling through ridge-side waterfalls, and there simply aren't that many vehicles on the planet that can accomplish both tasks as well as this one does. True definitions aside, in this case, "G" stands for Gentleman General Purpose. 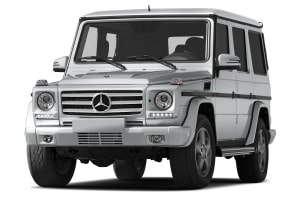