2014 Acura MDX ad campaign the most expensive in brand's history

Realizing that it must spend more marketing dollars to compete with the more established luxury automakers, Acura is preparing to launch its most expensive ad campaign ever for its redesigned 2014 MDX. At $78 million, according to Advertising Age, the new "Made for Mankind" campaign that kicks off next month is exactly double what Acura spent on the 2013 RDX launch last year. It's also the brand's first cooperation with its new agency, Boston- and Los-Angeles-based Mullen Advertising. Thanks to its bigger budget, we'll be seeing ads for the MDX pop up just about everywhere from television commercials, cinemas and billboards to videos focused on computers and mobile devices.

The first such video is entitled "Human Race," and it enunciates Acura's recent tagline highlight, the synergy between man and machine. More interestingly, the 2014 MDX, which went on sale this month, doesn't make an appearance in the 60-second spot until close to the end. This video is posted below as well as a press release from Acura along with images of various ads we should start soon.

Acura today unveiled a new multi-channel advertising campaign for the all-new 2014 MDX entitled "The Extremely New MDX - Made for Mankind." The campaign highlights the complete technical transformation of the MDX and centers around the idea of "Made for Mankind," a concept designed to highlight the unique engineering and design philosophy at the heart of all Acura vehicles - the synergy between man and machine.

Through this new campaign Acura has set out to identify not only what makes the "Extremely New MDX" different, but how it harnesses technology to create a seven-passenger luxury SUV that connects the Acura driver to the car, to the road, and to the world around them in new and exciting ways.

The new, multi-platform MDX campaign will be seen on premium national and local television programming, in high-impact online video and digital experiences, in proprietary location-specific mobile media, in conversation-driven social media, in high-profile out-of-home locations and in upscale print publications. The emphasis is on video and digital content, beautiful films that will be distributed and shared in multiple environments: TV, tablet, PC, social, mobile and cinema.

There are three distinct video concepts as part of the campaign.
-"Human Race" is the anthem spot evoking Acura's dedication to creating vehicles performing in harmony with the driver.
-"Re-Invention" depicts how the MDX has been completely re-thought and improved to the point that the only remaining component of the previous generation model is a small metal bracket.
-"Choose," focuses on the 2014 MDX's all-new Integrated Dynamic System (IDS) with three driving modes: Sport, Normal and Comfort. IDS adjusts steering effort, throttle response, SH-AWD performance and Active Sound Control to suit the tastes of the driver.

"The all-new 2014 MDX is the benchmark for luxury SUVs. We've advanced the current MDX's already great dynamic performance, while improving fuel efficiency and luxury comfort and styling," said Mike Accavitti, senior vice president of automobile operations at Acura. "The new MDX campaign captures Acura's unique perspective on luxury defined by the quality of the driving experience, where the vehicle performs at the will of the driver."

Acura partnered with its new creative agency-of-record Mullen (Boston and LA) and with MediaVest, the new media agency-of-record for the brand, in the development of the new campaign. This is the first campaign from Mullen and MediaVest since the agencies were hired in March of this year.

"The most emotionally resonant big ideas are born from an absolute truth about a brand, and Acura's own designers and engineers will tell you, everything they consider and eventually create starts with the human beings behind the wheel," said Gary Robinson, manager, national advertising and brand at Acura. "Luxury as the result of synergy between man and machine. That harmony was our guide - and all of our work will seek to tell that story in ways that consistently elevate the brand's prestige."

The 2014 MDX went on sale at Acura dealerships nationwide on June 20, 2013. Built on a completely new platform, the seven-passenger 2014 Acura MDX offers outstanding ride comfort, a more versatile and luxurious cabin, increased fuel efficiency, advanced connectivity and exceptional dynamic performance. The MDX is also being offered for the first time in a more affordable and even more fuel-efficient two-wheel-drive configuration.

To view the materials for the new MDX campaign, please visit acuracampaigns.com. Link to the "Human Race" TV spot at: http://youtu.be/mEZPH_YoJhY 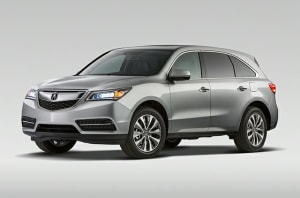