Morgan 3 Wheeler vs. Caterham Seven in a battle of Brit flyweights

Jonathon Ramsey
What's the word auto journos are looking for when they talk about what's missing in modern supercars? "Thrill." In general, modern motoring marvels are a lot more driveable, a lot more comfortable, a lot more reliable and a lot better at what they do than they used to be. But they're less thrilling than they used to be, and that's the sensation Chris Harris sets out to experience in a rolling test of the Morgan 3 Wheeler and the Caterham Seven Supersport.

The Morgan has a 2.0-liter motorcycle engine with about 115 horsepower, but with - according to Chris - "hilarious handling" and a "lovely geabox," it is "an event" that is "more alive at 34 miles per hour than a 911 Turbo at 120 mph." And Harris believes the Caterham, with just 182 hp and a five-speed gearbox, should be driven by any automaker trying to make a sports car or even inject more sportiness into one of its offerings.

Harris will be happy to personally explain where and how each roadster delivers its thrills in the video below. 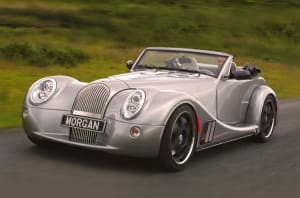