View All Specs
Add a Review
More Fun Than A Prius, Less Sensible Than A TDI

Let's have some fun, and do some math. We're talking pretty rudimentary stuff, multiplication and division, to figure out if the upcoming Volkswagen Jetta Hybrid can make a baseline case for itself against two very strong competitors in this segment. The competitors in question, at least for now, are two more Jettas: the diesel-drinking TDI and the fit-for-the-masses SE with VW's long-serving 2.5-liter engine.

To keep the equations clean and simple (hey, we're writers), we'll calculate based on the most flattering EPA miles per gallon stat from highway driving for all cars, assume a healthy 20,000 miles driven per year, and factor in today's average cost for the respective fuels these three require: diesel (TDI), regular (SE) and premium (Hybrid). We'll also start with the base prices for all models.

With all of that info loaded into our mental hoppers, how much time does it take to make the 45-mpg fuel economy of the Jetta Hybrid offset its premium price? To refresh, the $24,995 Hybrid is $2,005 more than the TDI and a heady $6,000 more than the SE. With highway economy ratings of 43 mpg for the TDI and 48 for the Hybrid, even considering that diesel fuel is more expensive, it'd take you about seven years of Hybrid driving before you've paid off the technology premium. The regular-gas sipping SE is a still more compelling argument for the frugal, as you'll need to drive your hybrid for roughly 13 years to make up the sticker difference at today's fuel prices. Bring the miles driven down to a closer-to-average 12k per year, and the payback takes even longer.

We want both better mpg-performance and at least as much driving fun as the TDI, or, really, what's the point?

So what? Run a similar thought experiment with any other sets of gasoline- and hybrid-powered models in the universe today and you're likely to come up with very similar results – hybrid technology is still too expensive to "pay for itself" in almost every instance. The difference here, especially striking to those enthusiasts (like us) that have driven and enjoyed TDI products in the past, is that VW has long seemed to be the anti-hybrid, high-mpg beacon of driving fun in a world that becomes more Prius-shaped each time we look up from the Porsche catalog long enough to wince at it. So going into this full-bore test drive of the Jetta Hybrid, we want both better mpg-performance and at least as much driving fun as the TDI, or, really, what's the point?

At the heart of the Volkswagen hybrid proposition is a powertrain comprised of a 1.4-liter turbocharged gas engine and a 20kW electric motor that draws power from a 220-volt, 60-cell lithium-ion battery pack. Total output for the system is 170 horsepower and 184 pound-feet of torque, with the electric motor good for a consistent 114 lb-ft of torque on its own, though the actual put-through number is electronically limited by the car's transmission.

The Hybrid feels every ounce as quick as the 2.5-liter five-cylinder-equipped Jetta.

The electric motor is also able to work on its own, in a fully electric mode, when state of charge and load demands allow, up to 37 miles per hour (or 44 mph when one has selected to drive in the more efficient "E-Mode"). In practice, we found it fairly difficult to use this EV mode much, even around town, unless we were very conscientious about maintaining an even, slow application of throttle. The EV mode will probably prove much more useful as an incremental addition to overall good fuel economy figures than it will contribute long periods of emissions-free driving.

Of course, the electric motor is also used in tandem with the turbo gas engine to offer more scoot during full-throttle runs. Here we were quite pleased with the overall torquey feeling of low-speed acceleration, as well as the ability to execute passing maneuvers at highway velocities. The Hybrid feels every ounce as quick as the 2.5-liter five-cylinder equipped Jettas we've driven en masse, though doesn't offer the torque punch that the TDI has in store.

This Jetta is a far more fun-to-drive hybrid than most of its competitive set.

With that said, and factoring in the ultra-smooth-shifting, seven-speed DSG gearbox with its attendant willingness to drop or add gears rapidly in either auto or manual modes, this Jetta is a far more fun-to-drive hybrid than most of its competitive set. Certainly mainstream Prius drivers would be likely to call the Jetta "sportier" than Toyota's segment leader, though we're not sure exactly how many mainstream buyers care about that capability.

Likewise, the ride and handling profile of the Jetta Hybrid is a bit crisper and more enthusiastic than your bog-standard compact gas-electric, though that's a bit like calling it "almost not boring." We found the suspension to be largely smooth and unfussed when dealing with poor road surfaces, and only moderately squishy when asked to take a corner at faster velocities than the posted limits would recommend. The front end of the car was somewhat willing to turn-in quickly, though the added weight of the Hybrid battery pack, along with the Jetta's natural tendency towards safety-first understeer anywhere near the limit, saw the front end pushing well wide of any apex we may have been foolish enough to aim it at. (Unless we aimed very slowly, of course.)

The car's controls, from the fuzzy-feedback steering experience to the non-linear grabiness of the regenerative brakes, were predictably not-crisp, sadly. The throttle was squishy in the first inch or so of travel, too. We adjusted to all of this, even the strange brakes, in just a few days of driving, but the point is that we were not exactly dazzled for a hybrid that may have been the enthusiast's answer to the run-of-the-mill.


We ended up with a figure of 36.2 mpg for our total test period.

The other critical expectation of the Jetta Hybrid, of course, is that it offers really kick-ass fuel economy. And here, we were disappointed. Our test of the car ran for more than 300 miles over a week of driving, including hundreds of miles on the freeway headed to and back from the west coast of Michigan. We ended up with a figure of 36.2 mpg for our total test period. Even if we take those numbers with a grain of salt – there was certainly a lot of fast driving when we were on back roads, and on the highway, our cruise control tended to be set at 75 mph or higher – they strike us as significantly less impressive than the last set we generated behind the wheel of a Jetta TDI, and less still than the Jetta Hybrid's EPA combined rating of 45 mpg.

With that, and considering that the Jetta Hybrid is almost a carbon-copy of every other Jetta from interior, fit/finish and exterior points of view (the car does have a snazzy set of optional wheels that are specific to the trim), we have to wonder who this new high-tech hybrid is aimed at.

Volkswagen estimates some five-percent of Jettas sold will be Hybrids.

Earlier we asked in a seemingly rhetorical fashion, "What's the point" of this Jetta Hybrid? A true answer to that question can be given in many ways, depending on who you are and what your priorities are. Certainly you can make environmentally responsible concessions for the lack of mpg-dominance for the car, based on its all-electric mode and quantifiable reduction in tailpipe emissions as a result. You could argue for convenience if there's a paucity of diesel pumps around your home court, or you may even claim a fondness for the slightly more refined running of the Hybrid's gas/electric operation. If you're a VW product planner, you will almost certainly point out that, with green American dollars being thrown at hybrid models in increasingly large volumes, it would be fiscally irresponsible not to be a player in the growing segment. (For what it's worth, Volkswagen estimates some five-percent of Jettas sold in the model year will be Hybrids.)

Realistically, there's not an ironclad case for ownership to be built here. You want what you want, and buy what you buy. A hybrid doesn't make any less sense than a GLI, for instance, it just makes sense in a different way, to a whole different set of shoppers. We'd still plunk our Jetta money down on the TDI model, probably ten times out of ten, if fuel economy is our jones. Not because the Jetta Hybrid isn't good to drive, and probably to own, it most certainly could be. It's just not as good, which is enough to make all of the difference. 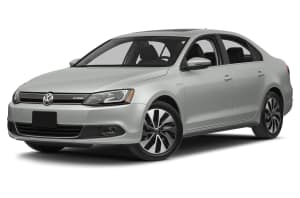