Why winter tires are worth it

They're not just for snow

It's never too early (or too late) in the season to start thinking about winter tires. "We start encouraging drivers to think about snow tires in September," says John Rastetter, a senior executive at Tire Rack, a prominent national tire retailer. But even if you've delayed the purchase, putting them on late is better than never. The most important thing you can do to get your car ready for a future snowstorm or just icy roads is to make sure it is riding on the right tires for the season.

While many drivers assume that regular all-season tires are just fine for year-round driving, that's only true if you live in a temperate climate. If you live where it snows – or your area experiences routine sub-40 degree Fahrenheit temperatures – a set of dedicated winter tires will dramatically improve your safety during the coldest months.

While brand new all-season tires can provide reasonable traction during the winter, their performance is roughly equivalent to half-worn snow tires, says Rastetter. Half-worn all-season tires, on the other hand, are unsuitable for winter driving in snow and on icy roads.

Winter tires gain their advantage not only because they have superior tread patterns that are designed for traction on ice and snow, but because they employ softer rubber compounds to enhance grip. That means when it's cold, whether it's on dry pavement, snow, or slush, it'll outperform an all-season. This is also why winter tires are not suitable for summer, warm-weather driving, as their softer rubber and more open tread pattern will wear rapidly - when temperatures climb above 40 degrees regularly, swap them out for summer or all-season tires. Likewise, low-profile summer performance tires are terrible in cold temperatures. All-season tires compromise their winter ability in order to be used during the summer.

Remember: they're not only for snow. They work better anytime it's cold. That's why it's better to think of them as winter tires. 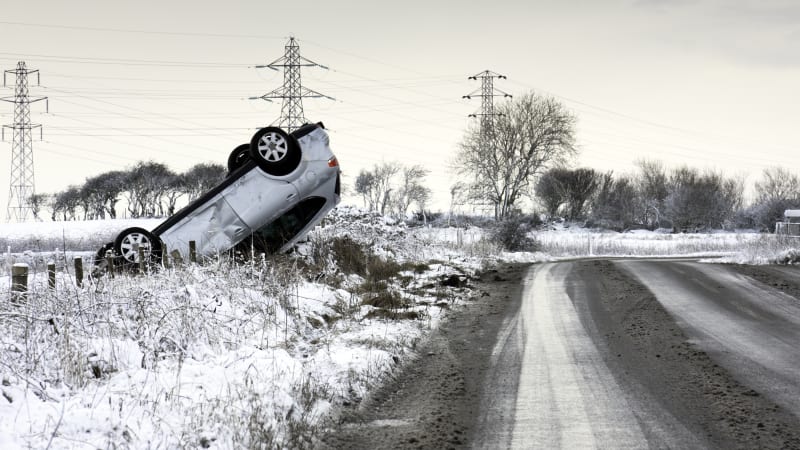 Many reasons for, few against

Consumers have gravitated towards the perceived all-weather sure-footedness of crossovers with all- or four-wheel drive, but while these systems help you go, they do nothing to help you stop. Stopping power on slippery surfaces is almost completely due to the traction provided by your tires. Dedicated winter tires massively outperform all-seasons in cold weather. Tests conducted by Tire Rack saw a 35 percent improvement in braking when using winter tires over standard all-season tires. And that percentage could constitute a life-and-death difference.

One of the biggest reasons customers have for not buying snow tires is always cost. A complete set of winter rubber mounted on spare wheels can easily cost $1,000 (or more) for owners of high-end vehicles with large wheels. Yet when compared to the cost of an insurance deductible – or the possibility that a good set of winter tires might be the difference between life and death in an accident – the tires make good sense.

The other factor that many drivers do not employ in their math is that the use of winter tires prolongs the life of your primary tires. "It may be an extra thousand dollars today," says Rastetter, "but it's going to stretch [your other tires] out from two to three years of service to five to six years of service."

Think of it this way: Instead of buying two sets of all-season tires over the ownership of your car, you're buying a set of all season tires and a set of snow tires. Really, the only extra cost is the additional set of wheels, or the cost to swap the tires back onto your main rims every season.

Where do I put my winter tires when I'm not using them?

This brings up another stumbling block that can keep drivers from using winter tires: storage. "One of the obstacles we see from our customers is the inability to store a second set of wheels and tires," says Don Barnes, an executive with Belle Tire, a retailer located in the Detroit area.

For some, the clutter of an already packed garage just cannot absorb a stack of tires. But for others - primarily apartment-dwellers - having to store tires throughout the year is virtually impossible. Then there's the inconvenience of having to transport tires to an installer twice a year, says Barnes. With tires sizes having grown considerably in the last decade, often four tires just will not fit in a small car, meaning more than one trip to the tire shop each time you have your tires changed.

That's why tire retailer Belle Tire started offering off-season tire and wheel storage, using the same warehouse it stores new tires in to keep its customers' old ones. Tires and wheels are cleaned and stored in a tote, and can be swapped by appointment at any of Belle's locations. Often, Barnes says, the service is so popular that it sells out.

While Belle's service is just one solution in a limited geographic area, we have seen other retailers offering similar plans, including some new car dealers.

Don't wait until it's too late

Keep in mind that snow tires are not produced year-round like all-season tires, and tire retailers can and do run out of them. That's why it's important to buy new snow tires even before the weather gets cold. The tire industry, like the car industry at large, has been shaken by the recent financial collapse and Tire Rack's Rastetter says there have been spot shortages in the last few years.

"As we get further into a winter season," he says, "there will almost always be some shortages."