2013 Honda Crosstour tiptoes onto the floor

Honda has pulled the sheet on the redesigned Crosstour here in LA, showing a car that is more refined, perhaps, than the outgoing model, but still not exactly what we'd call "a looker."

The usual suspects have been addressed in this refresh: the Crosstour's front fascia, fenders and side skirts have all been tweaked. The 2013 Crosstour will be available with both a 2.4-liter, 192-horsepower four-cylinder engine, and a more powerful, 278-hp 3.5L V6. Both engines are from Honda's new Earth Dreams family of powerplants and deliver better fuel economy – 22/31 city/highway miles per gallon for the four-banger – than last year's offerings.

Whether or not you care for the Crosstour's new mug (take a look at it on Honda's LA show stand in our attached gallery) you have to give it up to the company for making it easier than ever to buy, thanks to a lower MSRP. The Crosstour now starts at $27,230, which is $ 525 less than last year's model. Scroll down for a press release.
Show full PR text
2013 Honda Crosstour Now Offers Class-Leading Fuel Efficiency, More V-6 Power, Refined Styling, Enhanced Visibility and New Lower Base Price

The 2013 Honda Crosstour goes on sale November 20, 2012, with pricing beginning at $27,230 – a starting MSRP $525 lower than in 2012. Receiving extensive updates, the 2013 Honda Crosstour introduces more purposeful exterior styling, significant upgrades to the interior design and materials, and a more powerful, fuel-efficient Earth Dreams™ V-6 engine coupled to a six-speed automatic transmission with paddle-shift control. The rugged new styling, teamed with class-leading fuel-efficiency and a lower MSRP on the base four-cylinder model make the 2013 Honda Crosstour the smartest choice in a premium mid-size crossover.

The 2013 Crosstour is one of the first Honda models available with the new keyless Smart Entry with Push Button start. The 2013 Crosstour also features Honda's LaneWatch™ blind-spot display, which uses a camera system mounted on the passenger mirror to provide an enhanced rearward view of the passenger-side roadway. Other standard visibility-enhancing features include the rearview camera and new re-shaped rear headrests.

The 2013 Honda Crosstour also receives enhancements on the safety front including available Lane Departure Warning (LDW) and Forward Collision Warning (FCW). Other safety upgrades to the 2013 Crosstour are designed to help it earn top IIHS roof-crush safety scores, as well as a 5-Star NCAP rating.

The new available Earth Dreams™ 3.5-liter, 24-valve SOHC i-VTEC® V-6 engine utilizes Variable Cylinder Management (VCM) to maximize efficiency, allowing the engine to run on 3 or 6 cylinders, depending on engine load and speed. For 2013, power output climbs to 278 horsepower at 6200 rpm, a 7-hp gain over the 2012 Crosstour V-6. Peak torque output is now 252 lb-ft. at 4900 rpm with a much wider torque spread. The net result is a more responsive engine across the rev range that drivers use every day, combined with better peak power for quick acceleration, passing, and climbing grades. The Crosstour V-6's new 6-speed automatic transmission also includes new steering wheel-mounted paddle shifters.

Since its debut as a 2010 model, the Honda Crosstour has created its own unique crossover SUV identity with a distinctively sleek, sporty and fuel-efficient style. This continues for 2013 with a newly refreshed exterior that provides a more rugged, active, and premium look, while still concealing an accommodating rear cargo area with a large tailgate. An under-floor storage area in the rear of the vehicle adds even more functionality, while reversible floor panels accommodate messy cargo.

A series of visibility enhancements on the 2013 Crosstour can improve safety by increasing the driver's awareness of other vehicles, pedestrians or other obstacles that are around the Crosstour. Standard on all Crosstour models, save the four-cylinder EX, is Honda's exclusive new LaneWatch blind spot camera. Other improvements on all Crosstour models include reshaped rear headrests that enhance rearward visibility, a standard rearview camera, and a new Expanded View Driver's Mirror.

The Crosstour is produced3 at the Honda of America Mfg., Inc., East Liberty Auto Plant in East Liberty, Ohio. At its introduction, the Crosstour was named one of the "Top 10 Family Cars" by Kelley Blue Book's kbb.com. Consumer Guide then added "Recommended Buy" honors to the Crosstour.

1 Based on 2013 EPA mileage estimates. Use for comparison purposes only. Your actual mileage will vary depending on how you drive and maintain your vehicle.

2 Certain functions that rely on a satellite signal will not work correctly in Hawaii and Alaska. These functions include but are not limited to automatic clock updates and time zone adjustments.

3 Honda products are produced using domestic and globally sourced parts.Third-party trademark: The Bluetooth word mark and logos are owned by the Bluetooth SIG, Inc., and any use of such marks by Honda Motor Co., Ltd., is under license. 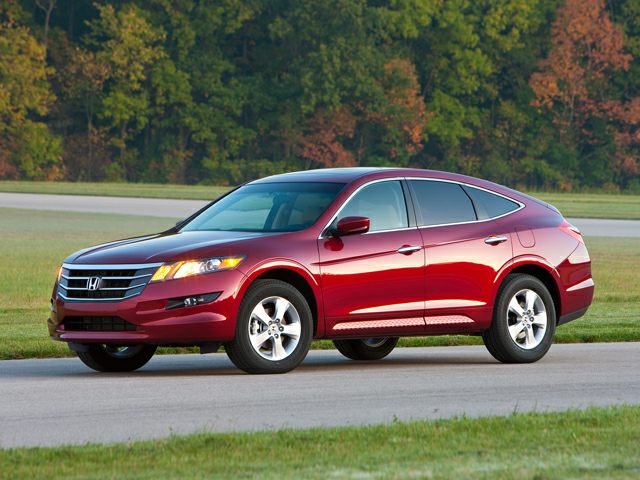