Everyone has been chiming in with their thoughts on the Tesla Model S lately, and with the car taking home awards like the prestigious Motor Trend Car of the Year, this probably won't change anytime soon. Not wanting to be left in the dark, Consumer Reports has managed to get its hands on a Model S to give its own impressions of the luxurious electric hatchback.

Like many other outlets (including our own first drive), CR praised the Model S for its styling (which it compares to an Audi A7) and performance (which it says "can put serious hurt on a Corvette"). With limited time with the car, the video doesn't touch on the specific range the institute attained, but it appears most of the car's time was spent on the track anyway.

On the flip side of things, CR dinged the Model S for its retractable door handles which the reviewer refers to as "fussy," and as much as CR has blasted Ford and its MyFord Touch for being distracting and largely button-less in the past, we were surprised at how much it seemed to adore the lack of buttons on Model S. They even glossed over the fact that drivers can surf the Web on the 17-inch touch screen while driving.

Scroll down to watch the first drive video and then head over to Consumer Reports for the write-up. 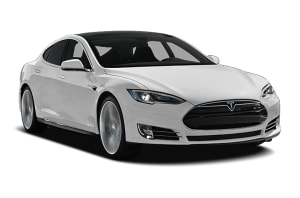