We first slid behind the wheel of the Buick Verano, the American automaker's entrant in the $25,000 compact luxury segment, one year ago in the gorgeous Pacific Northwest. After motoring through scenic Oregon, we boarded our flight back home quite impressed with the small four-door. In our First Drive review, we mentioned that the General Motors offering had "exceeded our expectations" and that its combination of features and appointments "made a compelling argument for itself."

Our one gripe, however, was aimed at the Verano's standard naturally aspirated (NA) four-cylinder engine. With 180 horsepower and 171 pound-feet of torque, we found its performance rather lethargic in the 3,300-pound sedan. As we noted, "The power from the 2.4-liter was adequate, but much of its steam was lost above legal speeds when attempting two-lane passing maneuvers."

For 2013, Buick has handily addressed the power deficit by fitting its sedan with GM's turbocharged 2.0-liter four-cylinder – an action that packs another 70 horses under the hood. Of course, there were other upgrades and enhancements to accompany the additional muscle.

We just spent a day in the heart of the Bluegrass State, on the other side of the country, putting the 2013 Buick Verano Turbo through its paces. Fall is a near-perfect time to visit Kentucky, and the Buick proved to be an excellent companion for touring the land of horses, tobacco and those wonderful bourbon distilleries.

The Verano Turbo is not to be confused with a dedicated athletic sport sedan.

Before we dive into the Verano Turbo, it is important to understand exactly where the four-door is positioned – and where it is not. According to Buick, the Verano Turbo is an entry-level luxury sedan, and the addition of the turbocharged engine is meant to give it more power and a slightly sportier pretense. Its main competitors include the Acura ILX, Audi A3 and, perhaps a bit curiously, the Lexus IS250. Officials told us in no uncertain terms that the Verano Turbo is not to be confused with a dedicated athletic sport sedan like the company's Regal GS. Put another way, the Regal GS is specifically tuned for enthusiasts while the Verano, quite bluntly, is not.

The Verano Turbo is configured with the automaker's Ecotec 2.0-liter turbocharged inline four-cylinder engine, a nearly identical version of which is found under the hood of the Cadillac ATS and aforementioned Regal. The direct-injected mill is slightly retuned to develop 250 horsepower and 260 pound-feet of torque. Front-wheel drive is standard, with buyers offered the choice between a six-speed automatic (GM's Hydra-Matic 6T50) and a no-cost six-speed manual (F-40) transmission. While the curb weight with the automatic is about 30 pounds heavier (3,520 pounds vs. 3,550 pounds), GM says both models will accelerate to 60 mph in about 6.2 seconds. That figure makes it the quickest sedan in its little segment.

A six-second sprint is a tremendous improvement in performance, but it won't cost owners dearly at the pump. The EPA estimates the Verano Turbo with the manual transmission will earn 20 mpg city and 31 mpg highway, while the automatic model will deliver 21 mpg city and 30 mpg highway (for reference, the naturally aspirated Verano is rated at a only a slightly higher 21 mpg city and 32 mpg highway).


A six-second sprint is a tremendous improvement in performance, but it won't cost owners dearly at the pump.

The brakes are identical to those on the non-turbo model (single-piston steel calipers clamping down on 11.8-inch ventilated rotors up front and 11.5-inch solid discs in the rear) as is wheel size and tire choice (235/45R18 all-season rubber). To differentiate the Turbo from the standard Verano, Buick is offering two new 18-inch wheel styles with unique finishes.

The suspension, on the other hand, has been reconfigured for the slightly heavier curb weight of the Turbo model (despite its slightly lower displacement, the engine's plumbing and other turbo-related hardware and cooling systems add about 100 pounds to the nose). The architecture remains independent with MacPherson struts up front and a torsion beam augmented by a Watts Z-link in the rear, but engineers have stiffened up the damping and spring rates by about 20 percent.

Cosmetically, the Verano Turbo is differentiated by its small rear decklid spoiler, dual exhaust outlets (an oval on each side), rear "Turbo" badging and the aforementioned wheel styles. Inside the cabin, there are also new sport pedals. Everything else, including the three-spoke steering wheel, is physically identical.


Buick would appear to be making things very difficult for its competitors.

Standard equipment on the Turbo includes everything from the non-turbo Verano, along with that model's Leather (1SL) and Convenience (1SG) packages, groupings that include leather upholstery, heated seats and a heated steering wheel along with a nine-speaker premium Bose audio system.

While it remains hidden upon first glance, Buick's IntelliLink infotainment system is also standard on the Verano Turbo (as it is on all Verano models). The system has been upgraded for 2013 with improved voice recognition and even more satellite radio functionality. A rearview camera is standard too, as is Side Blind Zone Alert and Rear Cross-Traffic Alert. With a base price of $29,990 and a long list of standard equipment, Buick would appear to be making things very difficult for its competitors - assuming the Verano's driving dynamics are equally as impressive.

As it turns out, they are.

During our first drive last year, we found little to complain about the Verano's behavior on the open road. The stiff chassis continues to feel as if it was milled from an ingot of titanium (it is actually unibody steel) and the automaker's obsession with noise reduction again recalls our comment of it being "one quiet little vault" in reference to its eerily silent cabin. The icing on the cake is the comfortable front seats, decent ergonomics (yet we still don't like the high-mounted start/stop button on the center console) and good outward visibility. The second row is a bit less comfortable, but few will complain (for the record, we put an adult in the second row and had to move our front seats up a couple inches to maximize their comfort).


The turbo 2.0-liter is a near-perfect match for the chassis.

The turbocharged engine makes a huge difference from the driver's perspective. It's hard not to, especially when one considers that the boosted engine shaves nearly 2.5 seconds off the standard model's 0-60 time. In terms of acceleration, the Verano goes from being adequate to rather quick. Floor the torque-converter six-speed automatic from a standstill and the front wheels will break free and spin for the better part of 25 mph. The new horsepower and torque completely erases the word "lethargic" from the Verano's dictionary. Even with three male adults on board (a payload of nearly 600 pounds) our heart rate didn't gain a single beat while passing slower traffic on narrow country two-lane roads. Needless to say, the turbo 2.0-liter is a near-perfect match for the chassis.

Buick reportedly tuned the exhaust to make it a bit sportier. It does sing a slightly more exciting tune than that heard from the single pipe in the non-turbo model, but only when one is standing three feet from the pipes at the rear of the sedan. From inside the cabin, the direct-injected four-cylinder soundtrack overpowers everything else.

It's time to give Buick's suspension engineers a nice bonus.

The 20-percent increase in damper/spring stiffness doesn't seem to make that much of a difference compared to the standard model – at least as far as our non-instrumented derrieres can tell. The ride is compliant without being too firm, yet there is still obvious body roll when quickly transitioning from left-to-right and back again (although it's far from annoying, excessive or dangerous). At one point in our drive, the road literally dropped out from under the chassis as we crossed a bridge with a huge dip in the pavement. The Verano Turbo bottomed out as any car would under similar conditions, but the end of suspension travel wasn't felt as a sharp impact in the cabin. Instead, it was just a firm bump. The damping and tuning is about perfect with regards to this vehicle's mission – it's time to give Buick's suspension engineers a nice bonus.

As the Turbo Verano wears the same wheel/tire package as its sibling, ultimate grip and handling hasn't improved much. When we were behind the wheel of the standard Verano last year, we noted "When pushed to the limit, the all-season tires, low-displacement engine and soft suspension all seem to throw in the towel together at about seven-tenths. It performed better than we expected, but it still won't run with the more expensive Acura TSX, Acura ILX, Lexus IS250 or Audi A3 with any of us behind the wheel." Seven-tenths is about right on this new model too, but the welcomed engine power will now allow the Verano Turbo to outrun the TSX (and ILX), IS250 and A3, as it will pull much more strongly out of the corners. To go any quicker, owners will need to upgrade to performance tires.

The Verano's automatic transmission, with a traditional shift gate (PRND +/-) on the center console, was most effective when left in Drive. The six-speed automatic and the turbo-four get along like best friends, interacting pleasantly nearly all the time. We were frustrated to find a lack of transmission shift paddles on the column or steering wheel (was it a deliberate omission, an oversight or cost cutting?). As a result, manual control means toggling the transmission shifter forward or backwards. We enjoy that about as much as sticking our left arm out the window to signal turns.

On the subject of manual control, we were pleased to find that Buick had brought along a handful of Verano Turbo 6MT models with them to Kentucky. The shifter itself is nicely shaped, looking much like the automatic lever, with a front-mounted trigger locking out Reverse. Rowing through the gears is a smooth affair, and the clutch engages with a positive feel. We'd be hard-pressed to find fault with the manual gearbox, but we also couldn't find a single reason to recommend it over the automatic. Like most of today's modern forced-induction powerplants designed to deliver gobs of torque down low (precisely where an automatic transmission benefits from it), the turbo four under the hood of the Verano Turbo prefers to run on the low side of the tachometer - there is no reward for exceeding 4,500 rpm. As such, the manual gearbox needs to be shifted early and often to extract maximum performance. If that's your type of fun and you prefer the additional interaction, then go ahead and opt for the no-cost 6MT.

We enjoyed the 2012 Verano when we drove it last year, but we like the 2013 Verano Turbo a full letter grade more. The additional horsepower, mild suspension tweaks and other enhancements improve this four-door so effectively that it leaves Acura, Lexus and Audi standing on a noticeably lower platform. The compact entry-level luxury sedan segment appears to have a new leader – and, for the first time ever, it's wearing a Buick badge. 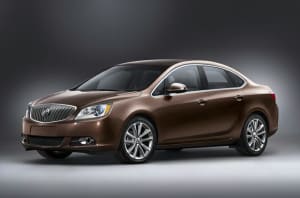