American automotive enthusiasts are a crazy bunch. While the rest of the world embraces quick, innovative and efficient dual-clutch automated gearboxes, a good portion of Yankee gearheads still scream for old-school manual transmissions. Despite all of the inadequacies with driver-directed gear changes, car nuts still enjoy rowing their own gears.

BMW tried to force enthusiasts into a single-clutch semi-automatic transmission when it launched the E60 M5 in 2005, but enthusiasts (and the automotive press) wailed so loudly that the Germans reversed course and delivered a six-speed option to the North American market. While performance actually dropped with the manual gearbox, its arrival quelled a rebellion.

The all-new fifth-generation 2013 F10 M5 debuted last fall with a standard – and much improved – lightning-quick dual-clutch transmission. But rather than send North American enthusiasts into yet another frenzy, BMW is adopting a conciliatory tone, offering buyers in the States the chance to opt for a manual gearbox at no additional cost.

We recently found ourselves on the starting grid at California's Mazda Raceway Laguna Seca sitting in a bright Sakhir Orange Metallic BMW M5. Nestled comfortably in the palm of our right hand, wrapped in soft leather with a bright aluminum collar, was a traditional manual gearshift knob.

Our European scribe, Matt Davis, was the first person on Autoblog's team to flog BMW's highly anticipated F10 M5 when he reviewed it last September in Spain. While he was fortunate enough to spend the day with the four-door on Spain's spectacular Ascari race circuit (put the track on your bucket list and thank us later), the automaker only supplied vehicles with its new M-DCT seven-speed dual-clutch automated gearbox. It is Europe's only choice.


BMW says the M5 6MT will sprint to 60 mph in 4.3 seconds. Assuming, of course, a very capable driver is behind the wheel.

But as we mentioned, BMW is offering North American buyers a manual gearbox option that is the focus of this road test.

The F10 M5 boasts a twin-scroll turbocharged 4.4-liter V8 (internally referred to as the S63Tü) rated at 560 horsepower from 5,750 to 7,000 rpm and 500 pound-feet of torque between 1,500 and 5,750 rpm. Redline is 7,200 rpm. In standard configuration, the engine is mated to a seven-speed dual-clutch transmission (M DCT) with BMW's Drivelogic System and steering wheel-mounted paddle shifters. According to the automaker, the M5 7DCT weighs 4,387 pounds and it will accelerate from a standstill to 60 mph in just 4.2 seconds with your grandmother behind the wheel (Motor Trend is reporting a 0-60 time of just 3.7 seconds with launch control assistance and BMW is known for being conservative with its numbers).

The no-cost manual transmission option alters things a bit. The six-speed short-throw box is fitted with the same final drive ratio and special M differential, but the six gear ratios have been optimized for acceleration. Tipping the scales at 4,354 pounds (30 pounds lighter than the automatic), BMW says the M5 6MT will sprint to 60 mph in 4.3 seconds. Assuming, of course, a very capable driver is behind the wheel.


It didn't take but a few minutes to realize that the manual transmission completely changes the M5 driving experience – and not for the better.

BMW gave us the opportunity in California to spend time with both the 6MT and 7DCT back-to-back on the racing circuit. We also grabbed a 6MT for a street drive, mostly to observe its low-speed around-town behavior. It didn't take but a few minutes to realize that the manual transmission completely changes the M5 driving experience – and not for the better.

The 6MT required us to become an integral part of the car – both microprocessor and hydraulic actuator.

The 7DCT required almost no operator input on the track. We adjusted the M Drive and M Driving Dynamics Control controls to their Sport Plus settings, put the shift mode to its firmest configuration in the paddock and then enjoyed time on the racing circuit whipping the steering wheel and playing footsies with just two pedals. The computer-controlled gearbox cracked off beautiful shifts, up and down, and the exhaust blipped and burbled every opportunity it found. In the odd chance that boredom set in, steering wheel-mounted paddle shifters allowed manual user input. While Bill Auberlen ( BMW's M3 GT winning factory pilot) may be quicker with the M5's 7DCT in manual mode, we were quickest allowing the transmission logic to manage shifts as we focused on turn entry and braking zones.

The 6MT is the flip side of the coin. Instead of just piloting the M5 around Laguna Seca's famed circuit, we were very involved as all four of our limbs were tasked with an individual role. The 6MT required us to become an integral part of the car – both microprocessor and hydraulic actuator – and our attention had to be diverted from the apex and exit markers to get the shifts just right. We were plenty quick in the 6MT (thankfully, gobs of torque allowed the M5 to run most of the track in third gear), but we lost precious time on a few shifts and had to really concentrate on nailing the downshift into second gear at Turn 11. It was also much more nerve racking flying one-handed through Turn One at 100-plus mph.

Speaking purely on a mechanical level, the 6MT lags behind the 7DCT. While there is nothing physically wrong with the manual box, rowing one's own gears is based on a technology that peaked in the mid-1990s (think Acura NSX, Mazda MX-5 Miata or Honda S2000), and it really isn't going to get any better. The automated dual clutch, on the other hand, continues to improve with each generation and subsequent software update.


It's a Frankensteinian adaptation to the platform incapable of handling the same stress as its dual-clutch sibling.

Simply put, BMW's F10 M5 was designed with the 7DCT in mind. The automated gearbox is capable of ripping up and down through the gears endlessly before taking the Autobahn home at a sustained 190 mph. In sharp contrast, and whether North American enthusiasts want to admit it or not, the M5's 6MT is a Frankensteinian adaptation to the platform incapable of handling the same stress as its dual-clutch sibling – that's a fact.

Our street drive revealed more about the 6MT than we were able to ascertain on the racing circuit (it is impossible to notice subtle qualities while driving at nine-tenths, with a helmet over our head, playfully chasing other M5s). We noticed that the M5 manual gearbox rev-matches on downshift when in certain modes (just like a Nissan 370Z). It works well, and the feature likely adds life to the clutch plate itself. We also noticed how much heavier and more massive the high-performance sedan felt when we were tasked with shifting. Lastly, our tooling around the Monterey Peninsula exposed the gearing as being a bit too tall for America's low speed limits.

The M5 is an impressive four-door supercar with the 7DCT, but the 6MT erases much of its fire.

It isn't easy to build a manual gearbox for a daily driver sport sedan strong enough to handle 500 pound-feet of torque (that kind of insane twisting force used to be reserved for race cars) and make it last 50,000-plus miles. We expected a heavy clutch, but the hydraulically assisted pedal felt unsubstantial and springy. Sadly, those qualities made engagement feel unnatural. The gear selector is well placed, but its movement was typical BMW – a bit notchy and not entirely precise. On one positive note, the light clutch made departing from a standstill easy and shifting while on-the-fly was effortless. Yet overall, something was missing. It was our smile – the 6MT wasn't very entertaining.

We were honestly a bit deflated by our BMW experience. The M5 is an impressive four-door supercar with the 7DCT, but the 6MT erases much of its fire. The manual gearbox delivers slower acceleration, reduced fuel economy (despite what the EPA prints) and, while we might be willing to give in on the numbers a little for an enhanced connection between car and driver, our time with the manual suggests its characteristics will frustrate more drivers than it will satisfy. While our enthusiast-rich blood craves involvement, in this particular situation, it became painfully clear that the computer-controlled 7DCT is the M5's better transmission.

And for those stubborn manual gearbox enthusiasts, we offer a bit of advice: Go find a nice used E39 M5. Its S62 eight-cylinder mated to a 6MT made it of the most engaging sports sedans ever. Then smile. 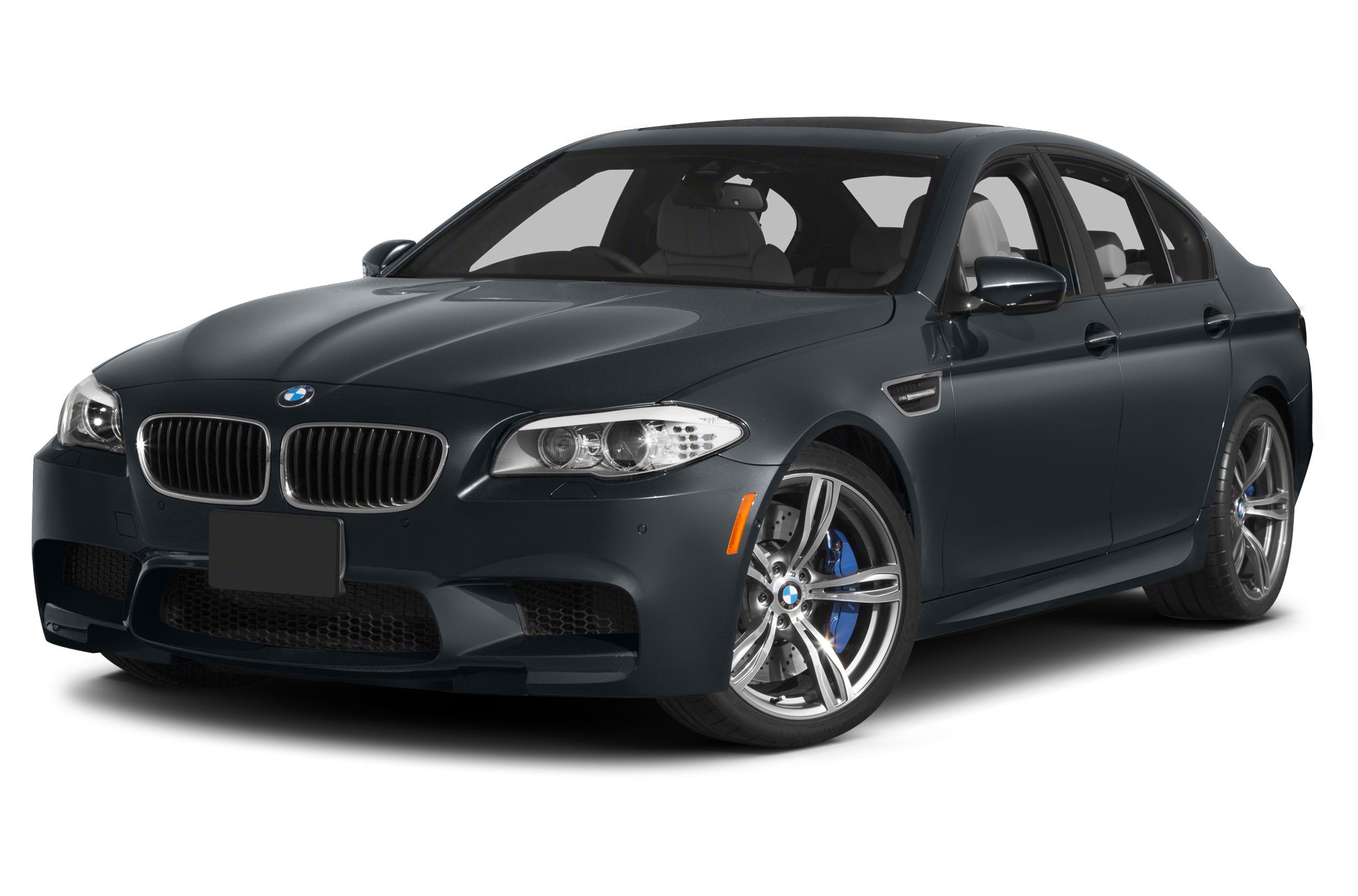