George Kennedy
Perhaps overshadowed at the Paris Motor Show by the carbon fiber chassis bits of the still unnamed Enzo successor, was news from Ferrari about a roof. The oddball Italian supercar maker has announced that its FF will now be available with a full-length panoramic roof – the first of its kind for the manufacturer, since it normally doesn't have such long roofs to work with. In this case, the roof of the all-wheel drive four-seat hatch is made of a single massive pane of glass.

According to Ferrari, the new glass roof "gives occupants a genuine open-air driving feeling, while providing thermal and acoustic insulation." That said, it does not appear that the roof opens, so some of that 'open air' experience may come from lowering a window or two.

While there may be some concern over the added weight of such a structure, the FF plays more of a grand touring role when compared to the 458 Italia and F12berlinetta. There is no word on how this feature will affect the price of the FF, or when the new models with the glass roof will go on sale. All we know is, any price or weight changes will be overshadowed now by a spectacular view.
Show full PR text
FERRARI SHOWCASES COMPLETE RANGE OF NEW-GENERATION MODELS AT PARIS
WORLD PREMIERE FOR NEW F1 COMPOSITE CHASSIS FOR UPCOMING LIMITED-EDITION SPECIAL SERIES

Paris, September 27th 2012 – The Ferrari display at the Paris Salon showcases the five cars making up the current range, each of which represents a new generation of the company's 8- and 12-cylinder models.

The F12berlinetta is the most powerful and high-performance V12 ever built, thanks to its 740 hp power output and light, compact architecture. It is flanked by a model with a complementary mission, the FF, our revolutionary four-seater four- wheel-drive car which now sports a new full-length panoramic roof in a special reflective glass (LowE) that gives occupants a genuine open-air driving feeling, while providing thermal and acoustic insulation.

The coupé and the Spider versions of the 458, powered by the V8 that has won the Best Performance Engine Award for two consecutive years, are designed for owners seeking a sportier driving experience. The California 30 – the '30' in the name referring to the reduction in weight and increase in horsepower introduced on the model earlier this year - is aimed at owners who put more store in greater versatility of use.

In line with its "Different Ferraris for different Ferraristi" philosophy, these cars are designed to fulfil complementary roles without compromising their DNA which remains absolutely unique in terms of performance, driving pleasure and advanced technologies. All offer exclusive design that combines modern styling with traditional cues typical of the marque.

Ferrari continually invests significant sums in its product range and this has led to the creation of 8- and 12-cylinder engines whose specific power outputs, levels of torque and maximum rev limits are unprecedented while, at the same time, offering improved fuel efficiency. Important innovations have led to reductions in the weight of our cars, too. In fact, the Scaglietti facility, which specialises in aluminium fabrication, works with more than 25 different alloys, some of which are being used for the first time in the automotive sector.
   
  While power has been boosted by approximately 100 hp across the model range, fuel consumption and emissions have been reduced by 30 per cent compared to four years ago thanks to work done not only on our engines and structural components, but also on aerodynamics, tyres and vehicle sub-systems.

Ferrari continues to invest heavily in innovation and is planning to launch the first hybrid model in its history in the near future. Having already revealed the power unit's architecture and components, Ferrari has chosen Paris to debut the new composite chassis derived directly from Formula 1 technologies.

Ferrari drew on its vast experience in working with composites for single-seaters for its new hybrid model which will be produced in a limited-edition, special series. For this model Ferrari chose not to use the industrial carbon-fibre manufacturing techniques, such as RTM (Resin Transfer Moulding), normally adopted in the automotive sector, as they did not meet the quality and functional standards Ferrari set itself.

The materials, design methodologies, construction processes, staff and instruments used are all shared with the Scuderia Ferrari, with the formation of a working group which relied on an important contribution from Rory Byrne, Ferrari's F1 chief designer who was behind 11 of the team's Championship titles.

The chassis uses four different types of carbon-fibre and is hand-laminated then cured in autoclaves following engineering processes which optimise the design by integrating the different components.

The main structure is made from T800 carbon with local, strategic applications of T800UD, a unidirectional carbon-fibre tape, for reinforcement. To ensure weight was kept to an absolute minimum, the structural underbody and the cross-member are made from another type of particularly high tensile strength carbon-fibre known as M46J. In certain critical areas, such as the doors, very tough T1000 was adopted as it is particularly efficient in terms of impact absorption which is why it is used in the nose-cone of the single-seaters. Carbon-fibre is combined with Kevlar® for the undertray to prevent damage from debris thrown up from the road.

The overall chassis is 20 percent lighter than the Enzo Ferrari, despite the extra weight required by housing the hybrid components and to meet regulatory obligations. Torsional rigidity is increased by 27 percent and beam stiffness is up by 22 percent. 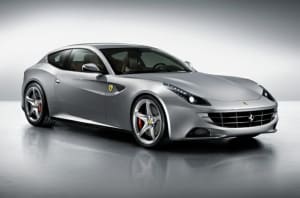