For any of our European readers who like the Cayenne Diesel but who have been holding out for a higher-power formula, good news has arrived. Porsche has confirmed earlier rumors by announcing that a more powerful diesel version of its Cayenne SUV will debut at the Paris Motor Show later this month.

According to Porsche, the Cayenne S will feature the company's most powerful diesel engine ever. Under its sculpted hood is a turbocharged 4.2-liter V8 with direct injection rated at 382 horsepower and 850 Nm (627 pound feet) of torque. With that power, the Cayenne S Diesel can accelerate from 0-60 in just 5.7 seconds and arrive at a top speed of 157 mph.

The Cayenne S Diesel also incorporates stop/start, which Porsche says makes it the only diesel SUV to do so. The result is a European cycle fuel economy of 8.3 liters per 100 km (that converts to roughly 28 miles per gallon, albeit not on the EPA's test cycle).

This news comes on the same day as the release of the video below, which celebrates a less-powerful diesel Cayenne. The U.S. version of the Porsche Cayenne Diesel (note the lack of an "S" designation), debuted at the New York Auto Show back in April featuring a 3.0-liter V6. That engine makes 240 horsepower and 406 pound feet of torque and carries a base MSRP of $55,750, whereas the not-for-North-America V8 diesel rings up at €77,684 – about $100k.

Is there a connection between the U.S. video and the Porsche press release below? Unfortunately, no. Porsche officials tell Autoblog that the Cayenne S Diesel will not be coming to America. If you really had your hopes up, well... feel free to thumb through the gallery wistfully.

Stuttgart. Dr. Ing. h.c. F. Porsche AG of Stuttgart is launching its most powerful diesel model on the market as the Cayenne S Diesel. The 4.2-litre eight-cylinder engine with biturbo charging produces 382 hp (281 kW) and offers a maximum torque of 850 Newton metres. This drives the new Cayenne S Diesel to top values in both dynamic performance and efficiency: The new top diesel completes the sprint from zero to 100 km in 5.7 seconds, and its top speed is 252 km/h. In the process, it utilises energy in an exemplary way: Its NEDC fuel consumption is just 8.3 litres per 100 km (CO2: 218 g/km). One factor contributing to this excellent value is the auto start/stop function; the new model is the world's only SUV with a diesel V8 to offer this functionality.

The Cayenne S Diesel offers a driving experience that is typical of a Porsche and yet is altogether new. It is emotional like a sports car in its dynamic performance and sound. The smooth running properties and resonant sound of the eight-cylinder engine attain a level comparable to that of previous Porsche V8 engines. The Cayenne S Diesel gets its very special character from PTM active all-wheel drive. This system produces the driving qualities of a rear-wheel drive vehicle – together with all of its benefits in handling and precision. In a sporty, dynamic style of driving, front-wheel drive actions precisely adapted to the driving situation intervene to improve stability and traction. The optional Porsche Torque Vectoring Plus (PTV Plus) makes this excellent dynamic performance even sportier.

The Cayenne S Diesel with its superior engine power is also the ideal vehicle when towing and manoeuvring boat or horse trailers. The Cayenne S Diesel still has sufficient power reserves even when working at its maximum towing capacity of 3.5 metric tonnes. The new vehicle also takes on the role of a long-distance champion: based on its NEDC fuel consumption the Cayenne S Diesel – equipped with an optional 100-litre fuel tank – can be driven a distance of about 1,200 km without having to stop to refuel.

On its exterior, the new top diesel model is an uncompromising Cayenne S as well, and it displays the typical visual features of the eight-cylinder versions. The brake system, for example, has been sized to handle the car's power output, and it is identified by its silver brake callipers. The black fins at the front end emphasise the open air inlets. As on the Cayenne Diesel, the "diesel" badges at the front ends of the wings call attention to the operating mode of the V8 engine. The model badge at the rear identifies it as a Cayenne S.

The Cayenne S Diesel will launch on the market in January 2013 and will cost 77,684 euros in Germany – including 19 per cent VAT and country-specific features. 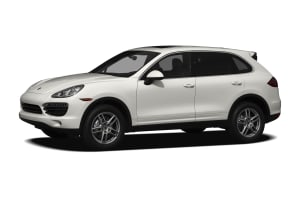