Volvo is adding a bit of exclusivity to its C30 hatchback for the 2013 model year by offering a special Polestar Limited Edition model in the United States. And we do mean limited – only 250 of the Rebel Blue hatches will be offered, boasting upgraded performance (sort of) and a whole host of standard kit.

We say "sort of" because, well, the Polestar power kit for this special C30 isn't any different than what you can spec on the standard car. Still, it offers an additional 23 horsepower and 27 pound-feet of torque, bringing the turbocharged inline-five's output numbers up to 250 and 273, respectively, paired to either a six-speed manual or automatic transmission.

Aside from its new blue hue (that we really like, by the way), the Polestar Limited Edition is set apart from other C30 models with the addition of unique 17-inch Styx matte black alloy wheels, as well as a color-coordinated R-Design body kit. Inside, standard equipment matches that of the C30 Premium Plus model, meaning all of the Limited Edition cars are fitted with a sunroof, power seats, an auto-dimming rear-view mirror, LED daytime running lights and Xenon headlamps. Of course, if you're feeling spendy, you can option up for the Platinum model, which adds navigation and a premium sound system to the mix.

All of this limited-run goodness comes at a price, though – the front-wheel-drive Polestar Edition retails for $32,445, including $895 for destination. Ticking the Platinum option will no doubt increase that cost by a few grand, and while it'll certainly be a hoot to drive, it's far more expensive than loaded competitors like the Mazdaspeed3 and runs into all-wheel-drive Volkswagen Golf R territory.

We've asked Volvo to pass along more images aside from the one poorly cropped, low-res shot you see here, and we'll be sure to update you if more photos surface. In the meantime, scroll down to read all of the details in the official press blast.
Show full PR text
Volvo Introduces 2013 C30 Polestar Limited Edition


ROCKLEIGH, N.J. (Sept. 11, 2012) - While the Volvo C30 has often been called the sportiest-looking Volvo, a new, limited-production version may also be called an "enthusiast magnet" when it makes its way to showrooms in November.

The 2013 Volvo C30 Polestar Limited Edition will definitely be limited in volume - only 250 will be made, beginning in October. But it won't be limited when it comes to youthful exuberance and is packaged in a remarkably attractive and affordable container. The base MSRP is $32,445, which includes an $895 destination charge.

The excitement begins under the hood where the C30's standard 2.5-liter turbocharged 5-cylinder engine receives a healthy performance upgrade. Polestar, Volvo's official performance partner, provides performance software that boosts output by 23 horsepower and 37 lb.-ft. of torque to 250 hp and 273 lb.-ft. This power boost is realized by increasing airflow into the combustion chambers and advancing spark timing.

Polestar's upgrade offers the best of both worlds: Optimized power and torque without affecting fuel consumption. This is possible thanks to efficient tuning of the engine which only increases the power output when it's needed. Thus EPA fuel economy estimates are identical to the standard C30 T5 R-Design with 21 mpg city/29 mpg highway for the six-speed manual transmission and 21 mpg city/30 mpg highway with the optional five-speed Geartronic automatic.

The visual magnetism of the C30 Polestar Limited Edition is enhanced with new 17-inch Styx alloy wheels with matte black finish and Polestar badges on the rear and sides of the vehicle. To signify that this C30 is special, all 250 iterations will wear the new-for-2013 exterior hue of Rebel Blue and have a special interior numbered plate.

A Sport Chassis, standard on the C30 T5 R-Design and C30 Polestar Limited Edition, provides improved chassis dynamics and steering reflexes. Compared to the C30 T5, spring stiffness for the R-Design is increased by 30 percent while the dampers feature a mono-tube design that builds up pressure quicker for 20 percent increased low-speed damping. Steering is more precise with stiffer bushings and a 10-percent-quicker steering ratio. 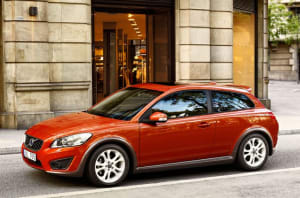