When it comes to the hybrid market, we assume – as most of you probably do as well – that the United States is at the top of the list to get whatever hybrid models an automaker builds. That vision is apparently altering for the Germans, though, as Audi is not bringing this A8 Hybrid to the States, instead favoring Western Europe and particularly Asia.

The start of deliveries in Europe already commenced in May, and Asian deliveries will start by 2013 as Audi mulls bringing the long-wheelbase version there, as well as a right-hand-drive model. The choice to not invite North American consumers to the party might not be a forever sort of thing, but at least for the next few years, the plan appears to be set in stone.

To be honest, Audi's full parallel hybrid strategy, along with that of parent Volkswagen Group's larger cars and SUVs in general, isn't terribly amazing – there's no thinking going on outside of the box here. Across the entire VW corporate family, the better choice for these bigger cruisers is always the range of outstanding diesels that generally weigh less and can cost less than their hybrid brethren. Nonetheless, Audi's high-tech image demands that the brand show it can play in every alternative propulsion sector. With China being Audi's best market by far, this A8 Hybrid has that nation writ all over its business plan.
What is, however, a nice upgrade to Audi's hybrid efficiency message is that the engine in this gas-electric A8 is the widely praised 208-horsepower 2.0-liter TFSI four-cylinder, not just a modified V6 or V8 that would lower development costs but hike the price beyond credibility. This four-cylinder choice helps contain both the weight and the price of the project. In Germany, the A8 Hybrid sells for €70,700 after all initial taxes. A more generously equipped long-wheelbase A8 Hybrid sells for upwards of €85,400 – around $105,000 U.S. Given general pricing trends on both sides of the ocean and keeping in mind the higher equipment levels that Americans prefer (and generally get for cheap), the short-wheelbase model would translate to around $70,000 U.S.

If that sounds oddly inexpensive, that's because the hybrid's price point in Germany is intended to sit right around that of a front-wheel-drive 201-hp A8 3.0 TDI V6, a markedly less powerful, less luxurious A8 than what is sold in North America. Coincidentally, though, the A8 Hybrid and A8 V6 TDI weigh the same at 4,125 pounds. Of course, here in the States, our base specification is nearly $80k for a 4.2-liter V8 Quattro model – at least until the promised 3.0-liter TFSI V6 arrives.

While the A8 Hybrid cannot beat the base diesel's fuel efficiency, it does average slightly lower CO2 emissions – an important distinction in Europe for taxation purposes. Acceleration to 62 mph for both cars is between 7.7 and 7.9 seconds. Where the A8 Hybrid significantly falls behind, though, is cargo room. The high placement of the 84-pound lithium-ion battery pack cuts significantly into trunk space. From the usual EPA-rated 13.2 cubic feet of space, chop things down to roughly 10.0 cubes using the EPA scale. This sort of lowbrow mounting strategy for the battery pack leaves us perplexed: Is the plan to have four adults aboard a large luxury four-door but leave them without enough luggage space? It's too compromising.

The A8 Hybrid could claim 37.3-mpg average city/highway per U.S. gallon.

The way the A8 Hybrid drives is understandably very numb and tranquil when done correctly and most efficiently. Push the car hard over dynamic stretches of road and you are quickly out of the car's element. This is not aided much by the front-wheel-drive platform and extremely frugal and detached-feeling electronic steering. To be fair, though, this clearly isn't a model intended for more passionate driving forays – just point it down the road and quietly go forth in the lap of luxury with little or no exterior air noise due to the 0.26 coefficient of drag.

Moments when the 2.0-liter four-cylinder switches off or on happen seamlessly, and the eight-speed Tiptronic with its integrated 52-hp electric motor is likewise creamy smooth, constantly seeking to slip into eighth gear for maximum fuel savings. Going strictly by the European cycle of efficiency ratings, the A8 Hybrid could claim 37.3-mpg average city/highway per U.S. gallon. Going by the same fudged scale, I realized an indicated 33.0-mpg average.

The cumulative result when they are both hammering together in boost mode under high throttle is 241 hp.

Helping the standard air suspension is a set of 255/45 19-inch Goodyear Eagle F1 tires, which, while good pieces, are probably not the most efficient rubber for what is otherwise a predominantly green-focused luxury car. On the other hand, the aerodynamic Turbine wheelset specific to the A8 Hybrid is good looking while aiding to lower wind resistance.

Between the 208-hp 2.0-liter TFSI four-cylinder and 52-hp electric motor, the cumulative result when they are both hammering together in boost mode under high throttle is 241 hp. The torque figure in this full-bore scenario is 354 pound-feet, much of that available from a standstill thanks to the push of the electric motor. All ancillaries that are normally run via mechanical belt drive from the 2.0-liter engine are now run electrically via various sensors that tell when things need to be actuated or not. These actuators via the high-voltage lithium-ion battery can also keep the climate control on while the engine is off in start-stop mode at traffic lights.

If we look at the details and packaging, we'd still have to go for the base diesel.

Electric-only propulsion can happen up to 37 mph under the right (and frankly almost nonexistent) conditions, though this can only be sustained for about two miles before the conventional engine ignites. In the meantime, the two power units can do their boost thing together at up to 100 mph, at which point the electric motor cuts out of the equation. Top speed is 146 mph, legal only in Germany.

Admittedly, we are pushovers for all of the big German four-door sedans because they deliver so much authority and power-of-stance. As a passenger or driving the A8 Hybrid as parsimoniously as intended (read: as luxurious transportation and not a soul-stirring sport sedan), we can still find something to appreciate in this A8 Hybrid. But if we look at the details and packaging, we'd still have to go for the base diesel – this is one hybrid that the U.S. can live without. Now, about that 4.2-liter TDI, please... 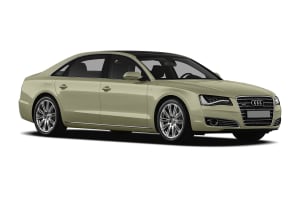