Sebastian Blanco
We noted yesterday that some 2012 Tesla Model S buyers have already received their cars even though deliveries won't officially begin until June 22. Now we've got video proof.

The very first Model S, decked-out with license plate TSLA S1, left the Fremont, CA factory this past weekend, Green Car Reports believes, in the hands of venture capitalist – and Tesla board member – Steve Jurvetson. Now that the U.S. government has fully homologated the car, people who invested early are getting their just desserts. Jurvetson is one of those and made sure he would get the first Model S during a board meeting back in 2010. "Regular" deliveries will reportedly start in two weeks. The entire first batch of Model S vehicles is made up of the sold-out Signature Series that offers the best performance (0-60 in 4.4 seconds, a top speed of 130 miles per hour) and range (up to 320 miles).

The video of the first key handover, available below, is unfortunately filled with low-quality audio, but it does offer pretty enthusiastic evidence that scribe Dan Neil is a big step closer to owing $1,000 to charity. We expect there will be a lot more of this sort of excitement as Tesla's new premiere EV makes its way market. 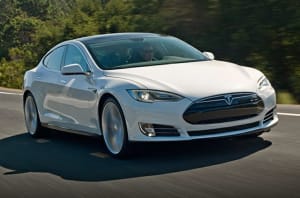