Honda has offered owners a settlement in a larger class-action suit, paying out either $100 or $200 depending on the vehicle and as much as $1,500 toward the purchase of a new Honda. According to The Detroit News, around 1,700 Honda owners have declined to participate in the class-action suit.
Show full PR text
Honda Wins Small Claims Battle, Loses Public Relations War

United States, California, Los Angeles, May 8, 2012 - Last February a small-claims court in California ordered Honda to pay Civic Hybrid owner Heather Peters $9,867.19 for falsely advertising 50 MPG city and highway. Instead of owning up to its mistake, Honda hired a national law firm with more than 800 lawyers to appeal her win. Lawyers are not allowed in small claims court in California, but they are allowed on appeal where losses are re-tried in their entirety.

"It's a sad day when regulations designed to protect consumers are used against them. I'm certain that the EPA and FTC never intended to shield Honda from liability for advertising claims that a court of law determined to be false."

A 178-page EPA report of 2006 found that hybrids in general have a greater sensitivity to operating conditions than conventional vehicles. The report states that hybrids "can either take full advantage of the hybrid technology or essentially nullify it" and found that the EPA testing methods overstated city fuel economy of the Honda Civic Hybrid by 85% when compared to the onroad testing of Consumer Reports. Click here to read full report - www.epa.gov/fueleconomy/420d06002.pdf

Nevertheless, Judge Gray found that Honda complied with EPA and FTC regulations. Peters does not fault Judge Gray for applying a poorly-crafted consumer regulatory scheme beyond his control, but she is urging the FTC and EPA to revisit the regulations to better protect consumers.

Regardless of Honda's victory in this small claims appeal, it has suffered an enormous public relations loss. The Peters case was widely publicized in over 1,000 news stories globally which have given a great deal of negative publicity to the automotive giant. Peters says:

"Of course I'm disappointed, but I'm still glad that I raised awareness that Honda is no longer the great brand that it used to be. They used to go the extra mile in customer service, now the go the extra mile fighting customers in court. I guess the moral of the story is buyer beware - especially of Honda!"

A recent settlement of class action litigation regarding the same claims raised by Peters may help other Civic Hybrid owners collect a nominal cash award and coupons towards future Honda or Acura purchases. Peters urges anyone who owned or leased a 2003-2009 Civic Hybrid to read about their rights at www.hchsettlement.com. 1,705 people who opted out of the class action settlement may possibly be able to opt back in. The Settlement Administrator is available to answer questions about the terms of the settlement and about the possibility of opting back in. Call (877) 465-4797 and press "9" to skip the recordings and speak to a human. 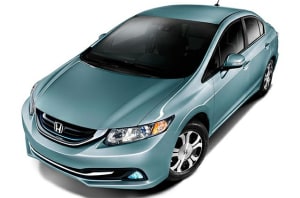