Don't judge a book by its cover. The sentiment certainly applies to cars as well, but doubly so. Years of driving and photographing new vehicles have taught us that you can't evaluate a new model – or even judge its styling – based on photos alone, no matter how good or bad the images or the sheetmetal might seem. And you can't really know anything until you get that car off the auto show stand and out in the wild, driving it on the street in its natural habitat.

We explain this because when we first spied the new 2013 Chevrolet Malibu, we didn't think much of it: Mostly carryover front fascia, grafted-on Camaro taillights, Bangle butt. Move along, nothing to see here. But a funny thing happened when we got behind the wheel of the Malibu Eco for a week. We warmed up to it. We actually liked it.


The more we looked at that new Chevrolet grille, the less we saw the old one and the more we noticed the nice-looking headlights and fog lamps. We appreciated how the new front fascia accentuates the 2013 Malibu's greater width, and we spied the symmetry between the hood and the bustle on the trunk. While Chevy is making a big deal about the aerodynamic justification for the design – it says the Malibu's coefficient of drag is just 0.30, which is nearly as slippery as the Volt – there's a strong case to be made that the exterior styling just plain looks good, because it does. In person, the Malibu is a handsome car, much more so than in photos.

Inside, the design is just as well-executed. The dual-cockpit instrument panel wraps nicely into the doors, and the materials and fit-and-finish are excellent. The car has the same substantial feeling we enjoyed in the Chevrolet Cruze – a solid weight to all its touch points that implies quality.

Driving the Malibu Eco isn't half bad either, at least not once you acclimatize yourself to the fact that this is not a particularly powerful automobile. Its 2.4-liter four-cylinder makes 182 horsepower, and a 15-kilowatt electric motor chips in an additional 15 horses. This is the eAssist mild-hybrid system that General Motors has been selling on Buick models for a little while now. In the Malibu Eco, it is seamless under both acceleration and braking, which is good, though a bit more of a boost when you flex your right foot would be nice, and a more direct and linear pedal feel under braking would certainly improve confidence during panic stops. Chevy says the Eco will accelerate to 60 miles per hour in 8.7 seconds, but in the real world it feels slower because you really have goose the throttle to get the little 0.5-kWh battery pack to do its discharge thing. But the Malibu Eco is quiet, its seats are comfortable, the steering wheel points the car where you turn it rather well, and the brakes definitely stop the car. Though none of this happens in a particularly engaging fashion, it's not meant to be a sporty car and we can live with that.

What we're having a harder time living with, however, are the numbers. Because even though we enjoyed the Malibu Eco, we still can't see how the car makes sense, vis-à-vis the competition – or even compared to other Chevys.

The Malibu Eco has an EPA rating of 29 miles per gallon combined, though we managed just 27.1 during our week in the car. Giving Chevy the benefit of the doubt, however, 29 is still just one more than the base four-cylinder Hyundai Sonata, Kia Optima and Toyota Camry. So the Eco isn't setting any records for being thrifty – and isn't that the point of the badge?

At $25,995 (including delivery), the Malibu Eco isn't cheap either. While the midsize sedan market encompasses a broad spectrum of pricing, from just over $20,000 for the value versions all the way up to nearly $35,000 for some fully loaded models, the Malibu Eco lies somewhere in the middle. Yes, equipment levels vary and the Malibu Eco does include some nice stuff, like Chevy's pretty MyLink Touch Radio and automatic climate control. But by comparison, the aforementioned 2013 Sonata starts at $21,670. You'll sacrifice a few bells and whistles, but we like the idea of living with a base Sonata and pocketing over $4,000. That's enough to buy all the gas you'd be saving in the Malibu even if you drove the car for the rest of your life.

So you have the various standard four-cylinder models of Chevy's competitors, delivering almost the same fuel economy while hitting price points that can give them a much better value equation. That's bad enough, but then there are the real hybrids, principally the Camry Hybrid, which starts at just $26,750. Offering 40 mpg combined, the fuel economy improvement over the Malibu Eco is enough that in your second year of ownership, you'll have paid for the difference in MSRP and the Camry will start saving you over $500 per year compared to the Malibu Eco. Of course, you'd be stuck driving a Camry, which isn't anything to get excited about. But there's also the Hyundai Sonata Hybrid, with a combined 37-mpg rating and a base price of $26,625, and the forthcoming 2013 Ford Fusion Hybrid, which promises to deliver over 45 mpg combined, though at what price point we don't know. (And the new Fusion looks stunning.)

But what really kills our interest in the Malibu Eco isn't the competition. Remember, we like the Malibu. We're trying to talk ourselves into recommending one. And we just might – but it won't be the Eco.

A standard Malibu sporting a 197-hp, 2.5-liter four-cylinder with direct injection (but without eAssist) will be offered later in the year, and we are eagerly awaiting its arrival. See, there's a reason the General is rolling out the Eco first. Because when this regular Malibu shows up, it will certainly be priced lower and the three cubic feet of trunk space lost to the Eco's hybrid battery will be regained. We also imagine the regular Malibu's fuel economy will be nearly as good as its Eco sibling.

While Chevrolet hasn't indicated pricing or fuel economy for the non-Eco 2013 Malibu yet, comparing a 2012 Malibu in similar trim (1LT, for the record) isn't likely to be too far off. Even with a three mile-per-gallon advantage for the 2013 – a delta that you have to hope would shrink, given the aerodynamic improvements that will be shared by all Malibus – it would take over seven years of driving with $4-per-gallon gas to level out the nearly $1,800 price differential.

So that seems like a pretty good argument against the Malibu Eco, but hey, we're dealing largely in theoreticals here. We haven't driven the standard Malibu yet, and lest we not heed our own good advice, we're not going to anoint a car that doesn't exist yet.

We have, however, driven the Chevrolet Cruze. And though GM isn't going to like it when we write this, the best argument against the Malibu Eco is sitting next to it on Chevrolet dealer lots.

Compare, if you will, some key specs:

The EPA classifies both vehicles as midsize sedans, and save for the Cruze's slightly smaller backseat and narrower width, the cars aren't that dissimilar in interior size. The Malibu Eco certainly doesn't feel that much more spacious inside, nor does it offer a significant upgrade in power or handling. The interior appointments are nicer, but you can get a top-of-the-line, automatic Cruze LTZ with leather and navigation for a few hundred dollars less, a car rated at a combined 30 mpg.

Yet despite all this conjecture, we've been ignoring two crucial aspects of car buying. The first is that a great many midsize sedan shoppers head to their local dealer completely uninformed and drive off in whatever is new and pretty. While we can't understand that sort of behavior, we do get the second: Sometimes even after you've done your homework and talked yourself out of the rationality of a purchase, you stand before that shiny new car and say, "Damn the torpedoes, I'll take it. Because I like it." 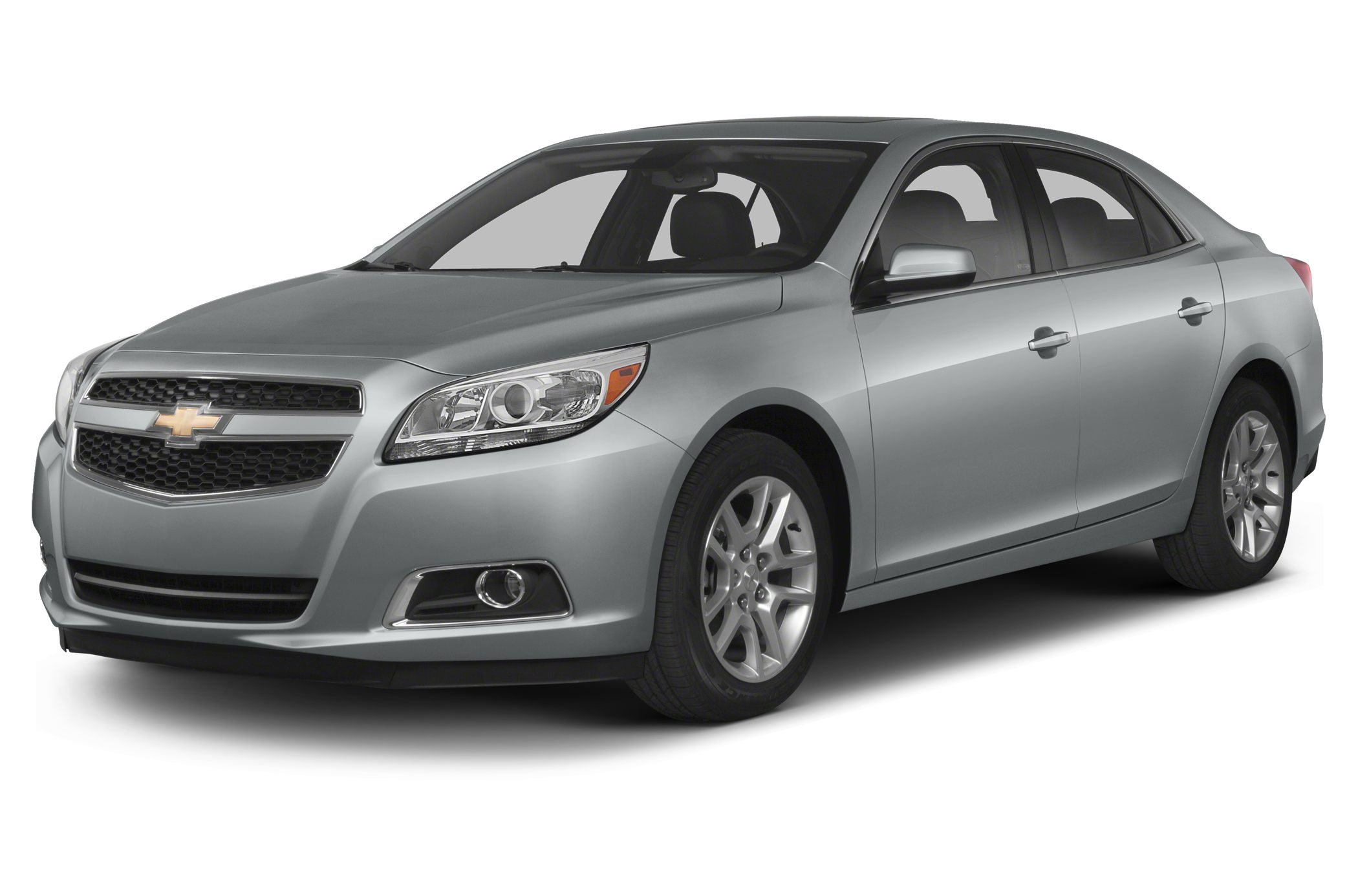