Toyota lost much of its credibility with enthusiasts after killing off what few performance cars it offered years ago, and yet the average car buyer still seems drawn to most anything wearing one of its badges. Even so, there has been one vehicle in the Toyota lineup that enthusiasts and cars-as-appliance shoppers have seemingly agreed upon for all the wrong reasons: the Yaris.

The subcompact Yaris has never taken hold here in the U.S. like its larger Corolla and Camry stablemates – its awkward shape and unmemorable driving characteristics combined to keep this little Toyota from the top of the sales charts. The Yaris has always remained far behind the monthly sales talliess of the more engaging Honda Fit and practical Nissan Versa.

Toyota has gone back to the drawing board for the 2012 model year, combating the dullness of the old Yaris with a combination of more expressive styling and the promise of improved driving dynamics. It has even tuned the Yaris SE with a stiffer suspension and bigger tires as an olive branch of sorts to budget-minded enthusiasts, so we couldn't resist taking the reins of a five-door SE for a week-long test to see if Toyota's new, greener branch is worth taking.

Whether in three- or five-door form, the outgoing Yaris offered polarizing styling, and the sedan was frumpier still. The good news? Toyota designers had nowhere to go but up, and our Absolutely Red tester finds the Japanese automaker taking a step in the right direction. The Yaris' new aesthetics reveal far more personality, with edgier contours and a more pleasing wheel-to-well ratio. These improvements are magnified with SE trimmings, as the front lower fascia is more aggressive and standard fog lights take the place of small black placeholders. We are also big fans of the SE's standard 16-inch aluminum wheels, which are wrapped in 195/50/16 Bridgestone rubber.

The 2012 Yaris is a big improvement on the outside, and the reclamation project gains steam upon entering the cabin. Once seated, drivers are greeted with a meaty, leather-wrapped steering wheel with white contrast stitching and a frill-free gauge cluster. The large, simple-to-use climate system controls and audio system interface are a welcome development, save for one nagging issue that we'll get to shortly.

Toyota has also upgraded materials beyond the aforementioned leather-wrapped wheel, starting with clever soft-touch padding around the stereo that stretches over to the front passenger door. The dash top is predictably dressed in hard plastics, but this vast expanse is at least rendered in a crosshatch imprint that looks and feels good. Our favorite part of the upgraded Yaris materials? The blue plaid cloth inserts decorating a set of otherwise black seats. The dynamic blue pattern brightens up the cabin, giving it a more thoughtful and upscale feel. Room is generally quite good, though there are others in the segment that offer more flexible seating configurations.

Our Yaris SE also came equipped with a generous helping of technologies that even B-segment buyers demand these days. This SE model arrived equipped with a six-speaker sound system made more desirable with the addition of a USB input, auxiliary jack, Bluetooth streaming music and hands-free calling. The sound system is great for a vehicle that costs only $16,400 (plus $760 destination), but we did have one issue: Toyota has opted to go with a single control knob to tackle a number of different tasks. Unfortunately, we rarely used it correctly. The big knob works as audio control, and in most vehicles, that means pressing it like a button will turn off the stereo altogether. Not in the Yaris. When the knob is pressed, the radio goes into menu mode, and turning the knob left or right no longer controls the volume. That's frustrating – we don't know why more automakers just don't provide separate volume and tuning knobs.

Buyers have come to expect more amenities in subcompact offerings, and the Yaris does a nice job of delivering the goods. Today's buyers also look for a vehicle that delivers outstanding fuel economy as well, and the Yaris answers the call with a 1.5-liter four-cylinder engine that produces 106 horsepower at 6,000 RPM and 103 pound-feet of torque at 4,200 revs. That's not a lot of juice compared to the 138-hp Chevrolet Sonic or the 117-hp Honda Fit, but the Yaris weighs in at only 2,295 pounds – almost 250 pounds lighter than the Honda and over 400 pounds less than the hatchback Chevy.

Even with its weight savings, the Yaris is still low on power compared to its rivals. Engineers have made up for the power deficit somewhat by gearing the five-speed manual model for spirited driving – at least in urban settings. The Yaris feels downright sprightly from a dead stop up to about 40 miles per hour, and Toyota's official 0-60 time is a reasonable 9.4 seconds. Unfortunately, those engineers haven't managed the same trick out on the open road – the 1.5-liter is a dud when trying to execute a pass on the interstate. And it's not like you can downshift to third gear to outpace slower traffic, because the little four is wailing away near redline the moment the clutch is released, and fourth often isn't enough help.

We weren't expecting a lot out of 105 horses, but we did have reason to hope for more excitement in the handling department. The reason for our optimism? Toyota says this SE model features a 20-percent stiffer chassis than the rest of the 2012 Yaris lineup, along with niceties like rear disc brakes shrouded by fatter tires. The sport-tuned independent MacPherson strut front suspension and torsion-beam rear setup do a fine job of keeping the Yaris planted, and it certainly helps that there's only 2,295 pounds to toss around.

The SE also boasts sport-calibrated electronic power steering. The wheel actually has good weight to it, though we'd prefer a broader spectrum of power assist variance to differentiate between grocery store parking lot cornering and taking tight turns at speed. When it comes time to chuck the Yaris into a corner, the experience can be a bit unnerving thanks to the seats. Because the front chairs are jacked up to give the driver an elevated seating position, tackling a winding road with gusto is a bit like like trying to slalom in a lawn chair. Also odd is the long-throw five-speed shifter, which sits at knee level and never quite manages to feel like a natural extension of the right hand.

It took us a few days to get used to the Yaris' unique driving position, but we instantly grew accustomed to its 34.5 miles per gallon. That's what we averaged during a week of mixed driving, a figure that splits the EPA's 33 miles per gallon city / 38 mpg highway estimates right down the middle.

Overall, the 2012 Yaris is a significant upgrade over its predecessor, with noticeable improvements inside and out. It's better looking, better equipped and better to drive. Unfortunately, enthusiasts still probably won't be compelled to consider this Yaris, mostly because of a serious power deficit compared to rivals from Honda, Ford, Chevrolet, Nissan and, well, just about every other serious subcompact on the market. That's something of a shame, because the Toyota's chassis is well executed in SE guise. Of course, even if enthusiasts don't bite, something tells us Toyota will have an easier time selling its entry-level hatchback than its Japanese rivals... if only because of the badge on the back. 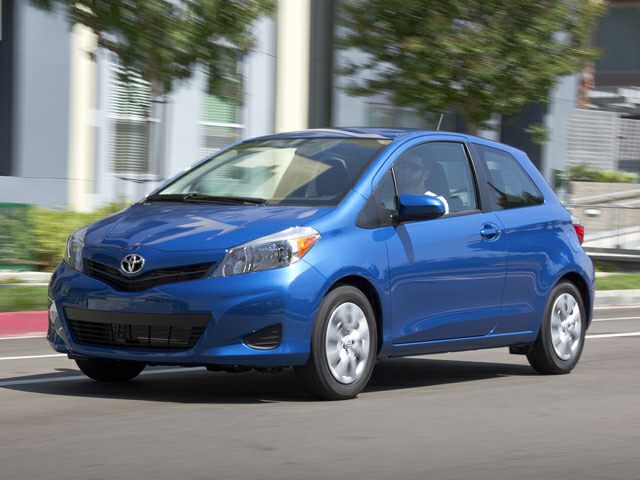