eBay Find of the Day: 2002 Subaru WRX makes tracks into our heart [w/video]

Among the many exploits of Ken Block we've posted on over the years, we've always loved this video of his Subaru WRX STI fitted with tracks at all four corners. So when we got a tip on an eBay Motors auction for a similarly equipped WRX, we were tempted to head up I-75 to check out the car in person.

The Subaru is for sale in Chassell, MI, some 550 miles north of Detroit in Michigan's Upper Peninsula, way up in the Keweenaw Peninsula, which extends into the middle of Lake Superior. With apologies to our friends in Canada, it's about as far north as you want to go when the snow flies. And the snow flies a lot in the Keweenaw, thanks to a wicked lake effect that dumps more than 200 inches of the white stuff every winter. Yes, that's over 17 feet of snow, but it's nothing compared to the winter of 1978-1979, when the area got almost 30. So if you're wondering why anyone not named Ken Block would fit a track system to their Impreza, well, now you know.

Alas, this year Michigan has not seen much in the way of winter, even up in the frosty north country. With just 120 inches of snow through the end of February and temperatures that pushed into the upper 70s on St. Patrick's Day, getting around the Keweenaw right now does not require tank-like traction – or even four-wheel-drive.

Whether that's motivated the seller or not, we don't know, but we do know what would motivate us to buy: The promise of next winter.

Click past the jump to see video of this eBay Motors find kicking up rooster tails, or check out all the pictures in our gallery. 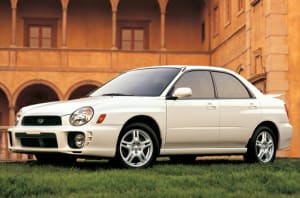