Who says you can't have the best of both worlds? Certainly not Volkswagen, which has just dropped the top on its new Golf GTI Cabriolet in advance of its debut at the rapidly approaching Geneva Motor Show.

Previewed in concept form (alongside an even sportier Golf R Cabrio concept) at the Wörthersee gathering last June, the Golf GTI Cabriolet – as you might have guessed – combines the best attributes of the Golf GTI and Golf Cabriolet. (Which, when you think about it, is not unlike the approach taken by big brother Bugatti with its Veyron Vitesse, only much smaller and just slightly more affordable.) It includes the GTI's 2.0-liter turbo four and six-speed gearbox (manual or DSG), electronic limited-slip differential, 17-inch alloys and all the visual cues that go with 'em, but with the power folding fabric roof from the cabrio.

Since the current Golf Cabriolet isn't available on this side of the Atlantic, we wouldn't go holding our breath on the GTI version's availability here, either, but you can check it out in the high-res image gallery and the press release after the jump while we gear up to go check it out in Geneva.
Show full PR text
VOLKSWAGEN LIFTS THE LID ON NEW GOLF GTI CABRIOLET

The most powerful production Golf Cabriolet ever is set to be unveiled next week at the Geneva Motor Show.

Pictured here for the first time, the Golf GTI Cabriolet packs in all the performance and practicality of the GTI hatchback, and adds the pleasures of open-air motoring for four, thanks to an electrically powered fabric roof which can be folded away in just 9.5 seconds, even while travelling at speeds of up to 18 mph.

Visually, the Golf GTI Cabriolet has all the classic GTI design cues. The radiator grille has a honeycomb structure with red edging and the GTI badge, while the front bumper incorporates a deep honeycomb air dam and distinctive vertical fog lights. Side sill extensions help give the GTI a wide, well-planted stance, while a bespoke rear diffuser is framed by a chrome tailpipe on either side. Smoked LED tail lights complete the look. As on the GTI hatchback, standard wheels are 17-inch 'Monza' alloys.

Under the insulated fully automatic roof are four individual seats covered in the classic tartan 'Jacara' cloth upholstery; 'Vienna' leather upholstery is optional. The bespoke GTI multifunction steering wheel is wrapped in leather, as are the handbrake and gear lever gaiter, all finished with contrasting red stitching. The pedals have brushed stainless steel caps, while there are black 'Edge' decorative inlays on the doors and facia. The hood lining and roof pillar trims are all finished in black.

Under the bonnet is the same 2.0-litre turbocharged four-cylinder engine found in the GTI hatchback, mated to either a standard six-speed manual gearbox or optional six-speed dual-clutch DSG gearbox and producing 210 PS. The benchmark zero to 62 mph sprint is covered in 7.3 seconds with either transmission (versus 6.9 seconds for the hatch), while top speed is 147 mph (146 mph for the DSG).

Maximum torque of 206 lbs ft (280 Nm) is available from just 1,700 rpm to 5,300 rpm, at which point maximum horsepower is achieved. This broad torque band helps to make the GTI an excellent cruiser – even at low revs in a high gear, the reserves of torque make the GTI's performance easy to tap in to. A standard EDS electronic differential lock and XDS transverse differential lock help to ensure that the power is easily transferred to the road.

Safety is every bit as much a priority as performance. As with all Golf Cabriolet models, the GTI comes with automatically deploying rollover protection, front and side head/thorax airbags and a driver's knee airbag as standard, all of which helped it to achieve a five-star (96 per cent) rating for adult occupancy in Euro NCAP crash tests.

The Golf GTI Cabriolet goes on sale in the UK in the second half of the year. Prices and further specification details will be announced closer to the on-sale date. For more details on this and the rest of Volkswagen's award-winning range of cars, please visit www.volkswagen.co.uk. 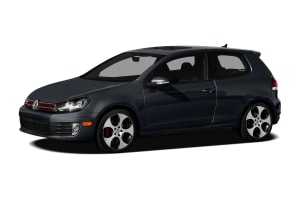