Jonathon Ramsey
Wayne Burgess is the chap on the right wearing the Gibson shirt, in his guise as lead guitarist for the band Scattering Ashes. Before – and we're presuming after as well – his shifts on the six-strings he's also a Jaguar designer and was the lead on the 2012 XF.

And that's how Burgess and mates ended up taking Jag b-roll and cutting it for a vid to their song "Cut Me Down." It's a twist on the decade-old Jag ad campaign "Everyone dreams of becoming a rock star. What then do rock stars dream of?"

In the words of the old American Express tagline, then, "membership has its privileges." You'll find the clip after the jump. 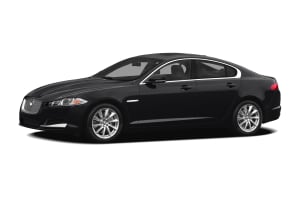