Jeff Sabatini
Remember the days of planned obsolescence? They're over. The latest J.D. Power Vehicle Dependability Study shows a 13-percent improvement in new car dependability over the first three years of ownership. The latest sample of 2009 model year vehicles shows the lowest rate of problems since the study's inception in 1990.

The big winner was the Lexus LS, which had the fewest reported problems in the study. Lexus was the highest rated brand as well, followed by Porsche, Cadillac, Toyota and Scion. J.D. Power says 25 of 32 automotive brands showed improved dependability, with six declining and one remaining the same.

While J.D. Power was pleased to see automakers producing high quality cars despite the economic disaster unfolding around them three years ago, it did note that some brands are still not getting credit for building reliable vehicles. "During the past four years, models from Buick, Cadillac, Ford, Hyundai and Lincoln have achieved consistently strong levels of dependability," the company's release stated, "but still have relatively high proportions of new-vehicle buyers expressing reliability concerns."

WESTLAKE VILLAGE, Calif.: 15 February 2012 - Strong initial quality of 2009 model-year vehicles-which were produced during one of the toughest years for the automotive industry-has translated into historically high levels of vehicle dependability in 2012, according to the J.D. Power and Associates 2012 U.S. Vehicle Dependability StudySM (VDS) released today.

The study measures problems experienced during the past 12 months by original owners of three-year-old (2009 model-year) vehicles. Overall dependability is determined by the level of problems experienced per 100 vehicles (PP100), with a lower score reflecting higher quality.

In 2012, overall vehicle dependability averages 132 PP100-an improvement of 13 percent from the 2011 average of 151-which is the lowest problem rate since the inception of the study in 1990. The strong dependability of these models reflects their high levels of initial quality when measured three years ago. According to the J.D. Power and Associates 2009 Initial Quality Study,SM overall initial quality of 2009 model-year vehicles was, at the time, the highest level of initial quality since the inaugural IQS in 1987.

"Despite facing immense challenges in 2009, automakers placed a keen focus on delivering outstanding levels of quality, which they understood would be essential to their long-term success," said David Sargent, vice president of global automotive at J.D. Power and Associates. "Three years later, owners of these models are enjoying unprecedented levels of vehicle dependability and manufacturers are experiencing market recovery. This is good news both for owners-who are holding onto their vehicles for longer than ever-and manufacturers, since perception of quality and dependability is a critical factor in vehicle purchase decisions."

However, according to Sargent, there are several brands that have performed very well in dependability during the past several years but still face challenges with customer perceptions of their reliability. In particular, during the past four years, models from Buick, Cadillac, Ford, Hyundai and Lincoln have achieved consistently strong levels of dependability, but still have relatively high proportions of new-vehicle buyers expressing reliability concerns.1

"Building vehicles with high levels of dependability is obviously a necessary element in reshaping consumer perceptions," said Sargent. "Negative quality perceptions are notoriously difficult to change, and it takes considerable time, but effectively communicating improvements in dependability may reduce concerns, and by extension, help new-vehicle sales."

Highest-Ranked Nameplates and Models
Lexus ranks highest in vehicle dependability among all nameplates in 2012. In addition, the Lexus LS has the fewest problems in the industry, with just 72 PP100. Rounding out the five highest-ranking nameplates are Porsche, Cadillac, Toyota and Scion, respectively. MINI and Scion post the greatest year-over-year improvements from 2011-by 60 PP100 and 55 PP100, respectively.

Toyota Motor Corporation continues to perform well in long-term dependability and garners eight segment awards-more than any other automaker in 2012-for the Lexus ES 350 (in a tie with the Lincoln MKZ); Lexus RX 350; Scion tC; Scion xB; Toyota Prius; Toyota Sienna; Toyota Tundra; and Toyota Yaris.

Ford Motor Company receives three model awards for the Ford Explorer (in a tie with the Nissan Murano); Ford Fusion; and Lincoln MKZ (in a tie). General Motors (Buick Lucerne and Chevrolet Equinox) and Nissan Motor Co., Ltd. (Nissan Frontier and Nissan Murano, in a tie with the Ford Explorer) each receive two awards. In addition, the Hyundai Genesis also receives an award. Although there are no awards in their respective segments due to an insufficient number of award-eligible models, or insufficient market share of award-eligible models in the segment, these models also perform particularly well: Ford Mustang, GMC Yukon and Porsche 911.

J.D. Power and Associates offers the following tips for consumers regarding vehicle dependability:

Consumer perceptions of vehicle quality and dependability are often based on historical experiences or anecdotes and may be out of line with the current reality. Consumers should gather as much information as they can on the latest models from a variety of sources to make an informed decision.
Historically, initial quality has been a good indicator of likely long-term dependability. If a model has high levels of quality when new, it is more likely to be dependable over the long term.
Vehicle dependability is at an all-time high and resale values are also very high by historical standards. If your vehicle has been properly maintained and is in good working condition, it may be worth more than you think if you are considering trading it in.

The 2012 Vehicle Dependability Study is based on responses from more than 31,000 original owners of 2009 model-year vehicles after three years of ownership. The study was fielded between October and December 2011.

Find more detailed information on vehicle dependability, as well as model photos and specs, by reading an article and reviewing brand and segment dependability ratings at JDPower.com.

About The McGraw-Hill Companies
McGraw-Hill announced on September 12, 2011, its intention to separate into two public companies: McGraw-Hill Financial, a leading provider of content and analytics to global financial markets, and McGraw-Hill Education, a leading education company focused on digital learning and education services worldwide. McGraw-Hill Financial's leading brands include Standard & Poor's Ratings Services, S&P Capital IQ, S&P Indices, Platts energy information services and J.D. Power and Associates. With sales of $6.2 billion in 2011, the Corporation has approximately 23,000 employees across more than 280 offices in 40 countries. Additional information is available at http://www.mcgraw-hill.com/.

No advertising or other promotional use can be made of the information in this release without the express prior written consent of J.D. Power and Associates. www.jdpower.com/corporate 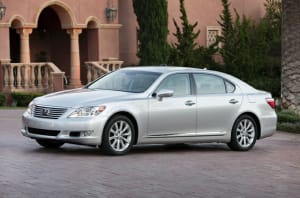